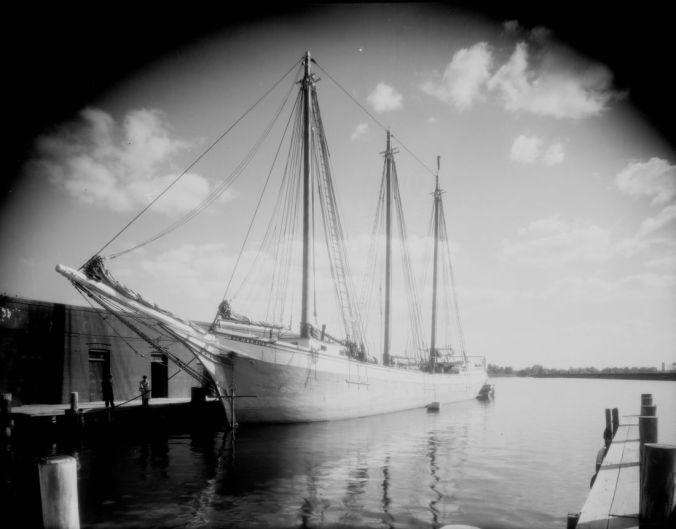 To my seagoing cousin Peter, on his birthday

The ram schooner Edwin and Maud in New Bern, ca. 1915-1935. She is resting at Union Point, where the Neuse and Trent Rivers come together, probably at the wharf for the E. H. and J. A. Meadows Company.  In the background, we can see the Trent River railroad bridge.

The Age of Sail was ending. The Edwin and Maud was one of the last commercial sailing vessels to be seen in North Carolina waters. Schooners, sharpies and other sailing vessels still crowded local harbors at the turn of the 20th century. But by the 1930s, merchant vessels with gasoline-powered engines had replaced nearly all of them.

A small number of stout schooners, however, continued to find a niche in maritime commerce by hauling bulk cargos such as grain, fertilizer, coal and lumber.

The Edwin and Maud was one of them.  Built at the George K. Phillips Co.’s shipyard in Bethel, Delaware, in 1900, she was a 3-masted, gaffed-rigged wooden sailing vessel. Like other ram schooners, she did not carry an engine and still relied wholly on her sails (with a little help, in tight spots, from tugboats).

She was a big boat: 127 and ½ feet in length, 204 gross tonnage and 24 feet in the beam. She was named after her first captain’s children.

That was because most were built in coastal villages in Delaware and Maryland that were located on creeks that emptied into the Nanticoke River, which then flowed into the Chesapeake Bay.

Between 1871 and 1918, shipbuilders just in Bethel, Delaware, where the Edwin and Maud was built, turned out as many as 30 ram schooners.

The source of the term “ram” is not clear, but they were built for a very specific purpose: hauling bulk freight between the Chesapeake Bay and ports elsewhere on the East Coast.

They were built with narrow beams so they could pass through the Delaware and Chesapeake Canal. They were also shallow draught, so that they could navigate into small harbors such as New Bern’s.

With its centerboard up, the Edwin and Maud drew only 7 feet, 4 inches of water.

They also had little standing rigging, so that there was plenty of room on deck for storing cargo.

The Edwin and Maud sailed out of Baltimore and was in and out of New Bern frequently in the early 20th century. The earliest newspaper account that I found of the ram schooner being in New Bern was dated January 16, 1902, only two years after she was launched.

At that time, the schooner came up the Neuse River with a cargo of corn for the E. H. and J. A. Meadows Company, which had a grain mill, fertilizer factory and shipyard at Union Point.

Chronicling America, the Library of Congress’s on-line database of historical newspapers, contains digital copies of the Evening Star, a Washington, DC newspaper that kept an eye on Chesapeake shipping. According to the Evening Star, the Edwin and Maud made at least 12 voyages to North Carolina between 1902 and 1915.

In all of the voyages that I have so far been able to document, the Edwin and Maud had the same return cargo: lumber. The northern states were hungry for Southern yellow pine, and New Bern, in particular, was a lumber mill town in those days.

The Edwin and Maud continued to haul freight in and out of East Coast ports until WWII. Eventually even she was replaced by tugs and barges that plied the Intracoastal Waterway.

By her final years in the freight business, few in New Bern would not recognize the Edwin and Maud in the distance at first glance.

She may not have been as pretty under sail as a clipper ship, but she and her kind were all that was left of the Age of Sail.  Many an old sailor paused to take in the sight of her and to remember bygone days. 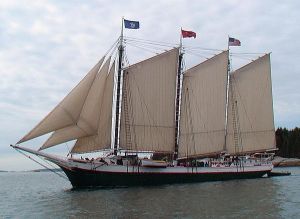 The Edwin and Maud is still sailing today. Now re-named the Victory Chimes, she is based in Rockland, Maine. While no longer carrying freight, she is part of the Windjammer Fleet that takes visitors on sailing cruises. The Victory Chimes (formerly the Edwin and Maud) is the last surviving Chesapeake ram schooner and is a U.S.National Historic Landmark.

Special thanks to Mike Alford, former curator of traditional workboats at the N.C. Maritime Museum, and to Victor T. Jones, Jr. at the Kellenberger Room at the New Bern-Craven County Public Library in New Bern, N.C. for their research assistance.