I want to thank Mr. Ed Pond for sharing his father’s stories and his own memories of shrimping at Davis Shore that I used in my post yesterday.

Ed did not just call me up out of the blue to tell me those stories.

Ed’s family and my family go way back: my grandfather, David W. Bell, and his father, Blakely Pond, met when they were in the army in France a hundred years ago, during the First World War. 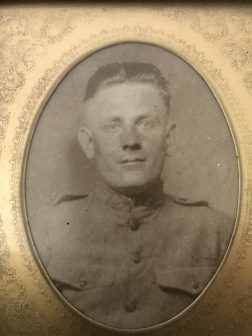 My grandfather David was from Harlowe, N.C. Blakely Pond was from Davis Shore, N.C. Both are in Carteret County, but they are 20 miles apart and the two young men never met until they got to France.

Ed and I learned this when he and his wife Dorothy first met my mother, Yvonne Bell Cecelski, at a lecture that I gave at the N.C. Maritime Museum in Beaufort, N.C., many years ago.

When Ed introduced himself to my mother and told her that he hailed from Davis Shore, she immediately asked him if his father was Blakely Pond.

Ed later described to me what happened next in an email.

This is what he said:

It was then that she told me this story that I had never before heard.

“My father, David Bell of the Harlowe section of Carteret County was  in World War I.

“He was in  the trenches in France in the midst of the awful trench warfare of World War I. He was very sick, and burning up with fever. A fellow soldier, as soldiers do, realizing how desperately sick with burning fever that my father . . . was, offered the only help that the soldier could.

“The fellow WWI soldier offered my soldier father a drink of water from his single canteen. And so my father, David Bell, drank from the canteen.

“The soldier who offered his canteen was named Pond.  And then without knowing the true nature of the sick soldier’s illness, the soldier, named Pond, lifted his canteen to his own lips and drank also from the same canteen….

“My father, David Bell, was later, in a few days, diagnosed with  meningitis, but the soldier who offered his drink from the same canteen never knew that [he] had the fever of meningitis until many decades later, after they were back home in Carteret County.”

And then Mrs. Cecelski said,

“You and I today first meet, even though . . . long ago, our fathers once were much more closely connected.”

All these years later, Ed Pond and I are friends, brought together by a mutual interest in Down East’s history and an act of kindness a century ago on the battlefields of France.

3 thoughts on “A Family Story from WWI”