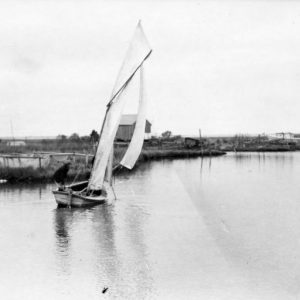 From the Charles A. Farrell Collection, State Archives of North Carolina

This is the beginning of an occasional series of historical photographs that will explore maritime life and labor on the North Carolina coast between 1870 and the Second World War. My goal is to use the photographs to understand better the lives of coastal people in the past and their relationship to the sea.

Many of the photographs come from Charles A. Farrell’s collection at the State Archives of North Carolina. For some time now, I have been taking his photographs back to the fishing communities where they were taken in the 1930s and looking for the stories behind them. Photographs will also come from other libraries, archives, museums and individuals.

This series is inspired by W. H. Bunting’s masterful treatment of historical photographs from coastal Maine.

This series is also inspired by Mr. Wesley Goodwin, a fishing net maker, now deceased, in Atlantic, N.C. Mr. Goodwin challenged me to understand the antique tools and fishing gear in his net shop, what went into making them and how their construction and use shaped daily life. In so doing, he showed me how much I still had to learn about coastal life before the Second World War.

On a more personal level, the fishermen and oystermen in my own family on the North Carolina coast have inspired this series.