The decoy carvers invited me to lunch last week. By the time I got to the Straits, they had finished carving for the day. They had put away their tools and paint brushes, and they had set out a big lunch—roast mullet, fresh tomatoes and cornbread with fig jam, just the kind of meal I like.

I enjoyed their company and I was grateful for lunch, but I could barely hold up my end of the conversation, much less appreciate the meal the way I would usually. Tall display cases full of incredibly beautiful carvings of water birds surrounded us, and I couldn’t take my eye off them.

The collection was breathtaking: every water bird imaginable. They included dozens of ducks, geese and swans, including the old roughhewn decoys that Core Sound carvers used to make a century ago to lure migratory waterfowl into range of their shotguns. 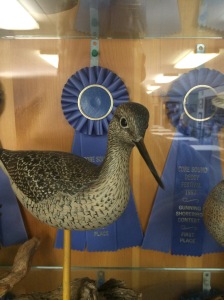 But they also included far more artistic renderings of the local water birds, both game birds and others— marsh birds, waders, a few shorebirds.

Their fathers and grandfathers—fishermen, boat builders and hunting guides—carved wooden decoys to help feed their families. Now they make them not for hunting, but for show.

One of my favorites was a marsh bird, a yellow leg, carved by Jerry Barkley from New Bern. Brother Gaskill, of the Straits, carved a pair of others that I especially liked—a merganser and a cinnamon teal drake. (He caught the mullet, by the way.)

Another carver’s long line of smaller duck carvings caught my eye, too– a black duck, a wood duck, a blue winged teal, a green winged teal and a dozen others.

You can see the guild’s decoys at the 30th annual Core Sound Decoy Festival at the Harkers Island Elementary School on Harkers Island, N.C. on Dec. 2-3. This year’s featured carver is James Lewis and the featured bird is a Barrow’s goldeneye (see left and above). You can also learn more about the Guild, a visit to its clubhouse or carving classes at the Core Sound Decoy Carvers Guild’s web site.

They were too beautiful for words. They reminded me of the famous glass flowers at the Harvard Museum of Natural History: objects grounded in a close observation of living things and in traditional craftsmanship, but transformed into art of unspeakable beauty.

No wonder I was distracted: it was like having lunch in the Louvre’s galleries—there was so much to see, so much to learn, so many reminders of the glory of God’s creation.

One thought on “The Decoy Carvers”