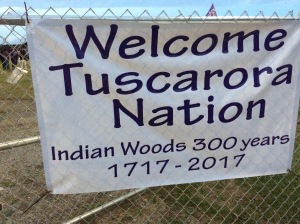 I first got an inkling of how much Indian Woods, in Bertie County, N.C., still means to the Tuscarora people in New York State when I was listening to a talk by a Tuscarora teacher named Vince Schiffert.

At the time, I was at an extraordinary conference called “Three Hundred Years at Indian Woods.”

The Indian Woods reservation was located on the north side of the Roanoke River, between Quitsna Swamp and Deep Creek, in southwestern Bertie County, N.C. The northern band of the Tuscarora Nation moved onto the reservation in 1717, after struggling to stay neutral in the Tuscarora War of 1711-1713. In the war, English forces killed or enslaved roughly a quarter of the Tuscarora Nation, previously the leading political, military and trading power in eastern N.C.. Largely between the 1760s and 1804, the Tuscarora in Indian woods left N.C. and settled in northern states, including eventually the Tuscarora Reservation in Niagara County, N.Y. Detail from Jonathan Price-John Strother Map of North Carolina, 1808 (courtesy of Library of Congress).

Held last weekend at Historic Hope Plantation, outside Windsor, N.C., this gathering had come about because of a unique collaboration among Dr. Larry Tise and his colleagues at East Carolina University; Schiffert and others from the Tuscarora Nation’s reservation in Niagara County, N.Y.; the staff and volunteers at Historic Hope; and Dr. Arwin Smallwood and his family and friends in Indian Woods.

Indian Woods was the site of a Tuscarora reservation from 1717 until the early 1800s. At this weekend’s conference, a busload of Tuscarora that now live in or around the tribe’s reservation in New York (where many of their ancestors eventually settled after leaving Indian Woods) came back to their homeland—“the Swampy Lands,” in the Tuscarora language.

If I had to pick one thing that struck me most forcefully during the conference, I’d choose a single word from the Tuscarora language:

In a presentation on Tuscarora agriculture, Schiffert—a Tuscarora teacher on the reservation in New York—explained that Kanehare?kye means the month of March in the Tuscarora language. 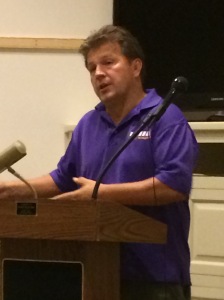 Vince Schiffert at the “300 Years of Indian Woods” conference. Schiffert is a language and culture teacher at the elementary school on the Tuscarora Reservation in Niagara County, N.Y. He came down to Windsor several times last summer so that he could tend a garden of corn, beans and squash– the “Three Sisters”– at Historic Hope Plantation. He discovered that Bertie County’s raccoons have a great fondness for Tuscarora corn. Photo by David Cecelski

More precisely, Kanehare?kye refers to lunar cycles, not a European calendar, and means the days roughly between mid-March and mid-April.

This was important to know– Schiffert told us– because “Kanehare?kye” also means “corn planting time.” And as he noted, that only makes sense if the word has its roots not in New York State, but in eastern North Carolina.

Here I plant my corn in early April. Depending on the variety, you can plant even a little earlier some years. But not in Niagara County, N.Y., where the Tuscarora Nation’s reservation is—nowhere close. They’re lucky to plant by the middle of May!

So the Tuscarora word for the month of March—the word still used by Tuscarora speakers north and south—doesn’t have its origins in corn planting time in the place that’s been their home for the last 2 or 3 centuries.

Susan Patterson was among the most riveting speakers at the “300 Years of Indian Woods” conference. She has been involved in indigenous rights struggles all her life, beginning on the Tuscarora Reservation as a child and eventually at Wounded Knee, Standing Rock and the Mohawk uprising at Eagle Bay, among others.

It harkens instead to an earlier age. The word evokes their ancestral home, and the place where the Tuscarora grew corn for more than a thousand years—the Swampy Lands.

That one word—Kanegare?kye—made the depths of the connection between their old home and their new home come alive for me.

No less than old manuscripts and artifacts, language is itself a path into history. For me that single word, Kanegare?kye, revealed what had been an invisible thread of rootedness and belonging that runs from Indian Woods to all the states and countries where the Tuscarora people make their homes now, binding all those places and many hearts together.

Several local communities welcomed the Tuscarora back home at a wild game dinner at the Blue Jay Recreation Center in Indian Woods. 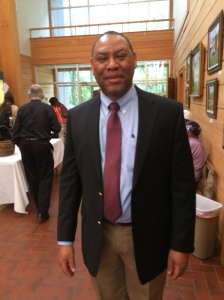