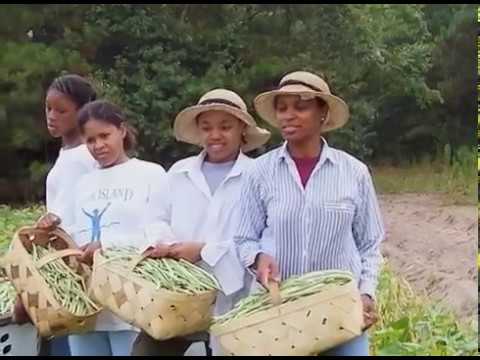 I was recently in Spring Lake, N.C., to do an oral history interview with Ms. Ammie Jenkins. Ammie is a leading advocate for black farmers and black landownership there in the Sandhills. As the (now former) executive director and driving force behind the Sandhills Family Heritage Association, she is devoted heart and soul to African Americans and their relationship to the land in Lee, Harnett, Cumberland, Richmond, Moore and Hoke counties.

Among many other things, under her leadership, the group has organized a farmers market and an annual celebration of faith, family and community, the Sandhills Sankofa Festival, which is held every year at Mendoza Park in Spring Lake.

Ammie’s passion for the land is personal. She grew up on her grandfather’s 650-acre farm in Overhill, in Harnett County.

That farm was a bountiful place with fields, gardens and orchards, as well as hog pens, smokehouses, a molasses mill and a vineyard.

Among her father’s wine customers was the Rockefeller family, the owners of a 13,000-acre estate next to her family’s property. Ammie remembers stomping grapes to make the wine when she was a little child.

A Reminder of God’s Provision for His People

Her family’s self-sufficiency and closeness to the land made a lasting impression on Ammie.

Her family’s forced removal from that land in 1954 to make way for an expansion of Fort Bragg also left a deep mark on her.

After a successful career as a computer programmer and businesswoman up north, Ammie returned home to Spout Springs, a rural community just up the road from Spring Lake. She returned with a determination to stanch the decline of black-owned farmland in the Sandhills and to renew the local black community’s traditional connection to the land.

One of the many truly wonderful things that Ammie has done is interview more than a 100  local African American elders about their family history and community life. She compiled some of the highlights of those interviews into a booklet called Healing from the Land that focuses on African-American traditional medicines and healing in the Sandhills.

Healing from the Land offers a window into a Sandhills culture with a wholly different relationship to the land than most of us have today.

“To us,” Ammie writes in the introduction, “our land was not just soil, [but also…] our food supply, our home, our source of income, medicine, recreation, and [a] spiritual reminder of God’s provision for His people.”

Much of the booklet is about folk medicines made from common native plants.

“All we need is right around this house”

Two of the women she interviewed, Shirley Smith and Rebecca Jones, for instance, swore by drinking “yellow root” tea for diabetes. Another, Lula Monroe, recalled getting sarsaparilla from a creek bank and making a tea out of it as an antidote for bad stomach aches.

Vada Prince used pudge grass as a purgative to expunge colds. When Ammie visited her, Miss Vada, as she is known in the community, still had a house full of teas, roots and other homemade cures.

Pearl Brower and a half a dozen others attested to the value of making a plaster out of mullein to treat swelling.

Poke-salad, or pokeweed, was a popular home remedy. Pokeberries are poisonous, the leaves can also be poisonous, and the roots had to be prepared just right in order to be eaten safely. Ammie’s Sandhills neighbors often use it a purgative. They believe that the body needs periodic cleansings for general health and disease resistance. Some also ground poke-salad roots and mixed them with baking soda as a treatment for poison ivy and poison oak.

In the late 19th century, the Sandhills was the heart of the state’s naval stores industry, which involved making tar, rosin and spirits of turpentine out of longleaf pine trees’ resin and wood. Ammie’s elders made a host of medicines out of turpentine and its byproducts: they used turpentine to make salves and poultices for joint pains, aches, rashes and wounds. Turpentine and sugar treated stomach worms. Rosin soothed sore throats.

“Pine top tea,” made from pine tree needles, was a balm for colds, fevers, aching muscles and other ailments.

Reading Healing from the Land, I started to wonder if anything growing in the Sandhills soil did not have a use. Other popular medicines described in the little book utilized chinaberries, catnip, wild cherry tree bark, black walnuts and eucalyptus, among many others.

“All we need is right around this house,” Miss Vada Prince, who grew up in Broadway, in Harnett County, explained to Ammie near the book’s end. “People just don’t know.”

This story originally appeared in my NC Folklife Institute blog in 2008. You can find my oral history story on Ammie Jenkins at the State Library of N.C.’s NCpedia web site. It was originally published in the Raleigh News & Observer.