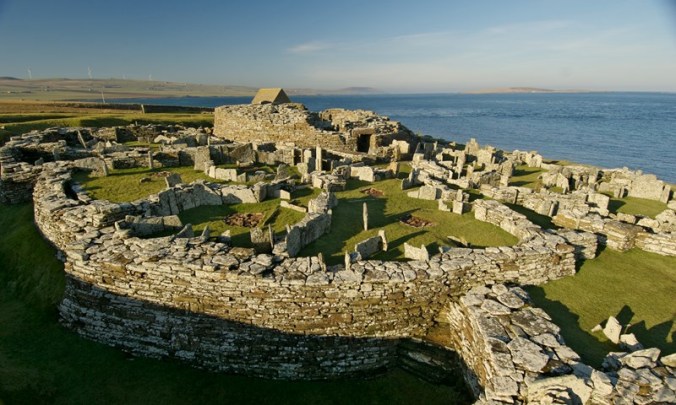 A memory. I am remembering when I was at Skara Brae on the west coast of the Mainland, the largest of Scotland’s Orkney Islands. Skara Brae is the ruins of an ancient village. It’s the oldest Neolithic settlement in Europe and was here long before the Pyramids or Stonehenge.

Skara Brae sits alone amid heath and field, far from the nearest town, a cluster of round stone homes that had been forgotten for thousands of years, until a storm exposed the site in the winter of 1850.

In the unearthed ruins, they found many artifacts, including awls, knives, needles, bowls and ivory pins, many of them made from the teeth and bones of whales, orcas and walruses.

My brother and I and our wives visited ancient ruins all that week: the Ring of Brodgar, the Broch of Gurness, the Standing Stones of Stenness and Maeshowe, where, in more recent times, merely a thousand years ago, Viking sailors took shelter and left runic graffiti.

We also walked endlessly by the shore, watching the roiling currents and swift eddies, sometimes traipsing through fierce and chilling winds, and always surrounded by the barks of seals and the cries of the untold thousands of seabirds that nest in the cliff ledges.

The strange thing though is this: the old church and municipal records, many of them found at the Orkney Library and Archive in Kirkwall, say that my grandmother’s people lived only a few miles from Skara Brae before they came to America and the North Carolina coast. There’s a small loch nearby, in fact, with the family name, the Loch of Sabiston.

It’s an odd feeling. The Orkneys are all so foreign and different than what we’re used to. The shores there are rocky, cold and barren of trees, while ours are sandy, warm and forested.

Even the smell of the sea and the aromas of the fields and meadows are unlike anything we know. And yet, again and again, my brother and I turn to one another and say how much it feels like home.

5 thoughts on “The Loch of Sabiston”