Today I am in Boston and by coincidence I stumbled onto two different accounts, in two different archives, that describe the same event in the history of North Carolina’s coastal counties: the sacking and burning of the town of Hamilton during the Civil War.

In November 1862 a Union army expedition left Plymouth, N.C., and headed inland along the Roanoke River. Plymouth was a small port at the mouth of the river and was in the narrow swath of the N.C. coast that had been in Union hands since the previous spring. The troops moved up the Roanoke River, hitting first Williamston, then Hamilton, and afterward marching toward Tarboro.

Apparently named after the now fashionable Alexander Hamilton (fashionable thanks to Lin-Manuel Miranda!), Hamilton is located on a rise overlooking the river. 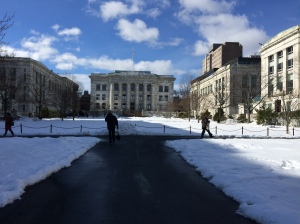 I found one of the 2 accounts of the burning of Hamilton, N.C. at Harvard Medical School in Boston. Photo by David Cecelski

The Union army’s depredations in Hamilton do not seem to be widely known. Another local incident in the Civil War—the battle of Fort Branch in December 1864—is far better remembered and has inspired a private historic site and an annual re-enactment.

But even the Town of Hamilton’s own web site and the county historical society don’t seem to be sure what the Union army’s soldiers did to the town in the fall of 1862.

The two men whose accounts I read today showed no doubts about what happened in Hamilton, and they were there. Both were Yankees. Both served with the 44th Massachusetts Volunteer Infantry, a 9-month regiment organized in Readville, Mass., and mustered in Sept. 12, 1862. 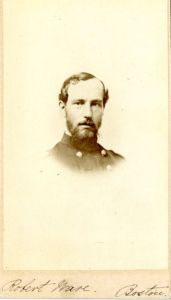 One, Dr. Robert Ware, was one of the regiment’s surgeons. I found his account of the events in Hamilton in letters that he wrote to his family in Boston during the war.

I read his letters at the Countway Library of Medicine at Harvard Medical School. The letters were preserved at Harvard because Dr. Robert Ware’s father, Dr. John Ware, was a distinguished professor at the medical school.

Countway Library’s Center for the History of Medicine has a large collection of Dr. John Ware’s correspondence and other personal papers, in addition to his son’s letters from the war.

The other eyewitness to the events in Hamilton was one of the regiment’s chaplains. His name was Edward H. Hall. I found his handwritten journal today at the Boston Athenaeum, again while I was looking for something entirely unrelated. 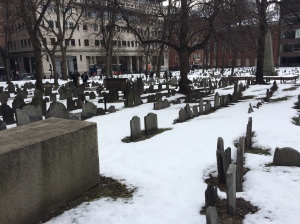 Located behind the Boston Athenaeum, the Granary Burial Grounds is the final resting place for Paul Revere, Samuel Adams, Crispus Attucks and other early American revolutionaries. Photo by David Cecelski

Founded in 1807, the Boston Athenaeum is one of the oldest subscription libraries in America. It sits in stuffy gloriousness next to the Granary Burial Grounds, the final resting place for such great American freedom fighters as Paul Revere, Samuel Adams and Crispus Attucks.

Dr. Ware and Rev. Hall were appalled by what they saw in Hamilton. The 44th Mass. had met no resistance there, and most of the town’s white civilians had either fled or were in hiding.

In a letter to his sister Helen, dated Dec. 26, 1862, Dr. Ware described Williamston and Hamilton as having been “burnt and pillaged.”

In an earlier letter to Helen, dated 12 Nov. 1862, soon after the incident, he summed up his attitude toward the expedition.

“I feel disgusted by the whole affair,” he told her. “It has been merely a raid up the country with no other result than to eat up the chickens, pigs, honey and potatoes of the people, steal their horses, and destroy the property which had been left by the flying inhabitants…. it has only served to enrage the people and demoralize the troops.”

Rev. Hall’s judgment was even harsher, at least with respect to the marauding of Hamilton.

“Our halt in Hamilton was a very sad one,” he recorded.

You can tell that for a moment he felt shaken in the righteousness of the Union cause. Referring to the We the People in the United States Constitution and to the reliance of a democratic government on the wisdom and moral character of its citizenry, he wrote, “For if these are the people, what does the nation deserve?”

When the 44th’s soldiers returned from Hamilton, he found them “nothing but a hurrying crowd of frontier men, shouting, cursing, reveling in pillage and license.”

He described the flames coming from the houses. And he explained how the regiment’s senior staff justified the town’s burning to their superiors, and maybe to themselves as well. 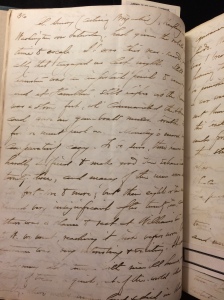 “We called it an accident of course and mourned over the folly of drunken soldiers to act so carelessly.”

As the 44th’s columns moved away from Hamilton and proceeded up the river toward Tarboro, the Rev. Hall said, “We marched away lighted by the flames of a burning village.”

Dr. Ware and Rev. Hall’s outrage might have seemed out of place later in the war, after both sides had descended into what I can only call a general barbarity. But that was not yet true in 1862.

Reflecting on that day in Hamilton, Rev. Hall wrote in his journal: “How gladly would I forget the closing of some of that drama. But it cannot be forgotten and must be recorded… [to] the eternal shame of the Union army.”

3 thoughts on “Hamilton, Burnt and Pillaged”