Shrimp trawlers docked on the Intracoastal Waterway by the new high-rise bridge to Goose Creek Island. The bridge connects the island with the mainland of Pamlico County. Courtesy, Dan Allen

This is the fourth post in my special series “The Color of Water.” In this series, I am exploring  the history of Jim Crow and North Carolina’s coastal waters, including the state’s forgotten history of all-white beaches, “sundown towns” and racially exclusive resort communities. You can find the other stories in the series here.

After learning about the history of Jim Crow in coastal places like Lake Waccamaw, Swansboro and Knotts Island, I sometimes felt as if I was getting paranoid. I started to see “sundown towns” and all-white beach resorts everywhere I looked on the North Carolina coast, or at least that’s how it felt for a while.

Not long after my visit to Swansboro, for instance, I was re-reading a classic coastal travel account, Henry Plummer’s The Boy, Me, and the Cat.

In 1912-13, Plummer, his son Henry Jr. and their cat Scotty sailed a catboat from Buzzard’s Bay, Massachusetts, to Miami, Florida, and back. The Intracoastal Waterway was still being built, and theirs was one of the first cruises over a large part of what had already been constructed.

On the way down, they found safe harbor in Stumpy Point, a remote fishing village on the mainland of Dare County, N.C.

Anchored in Stumpy Point Bay, they spent two nights and parts of three days with the local fishing families.

They found the people of Stumpy Point to be friendly, poor, hospitable and devout.

While in the village, Plummer also discovered, in his words, that the little fishing village had an unwritten policy: “no [blacks] allowed.” (He used a coarser word than “blacks.”)

The harbor at Stumpy Point, N.C. Courtesy, The Virginian-Pilot

At that time, no blacks lived in the village. However, African Americans regularly came by boat and worked in the village’s fish packing houses during the day. (No roads connected Stumpy Point to other towns until the 1920s.)

In The Boy, Me and the Cat, though, Plummer implied that Stumpy Point was a “sundown town,” the kind of village where blacks could come and work during the day, but could not live or stay after sunset.

He did not say how or when Stumpy Point had become that way, and I still don’t know.

A little later, I visited an old friend on Goose Creek Island, in Pamlico County. At that time, my friend was nearly 80 years old.  He had been a fisherman and oysterman for much of his life, and he had lived in the home where he was born all his life.

My friend told me that his island had the same kind of reputation as Swansboro, Knotts Island and Stumpy Point—no blacks had lived on the island in his memory, and the island had once had the reputation of being dangerous for African Americans to visit after sunset.

My friend did not know of any historical incident that would explain the island’s reputation for being hostile to black people. In fact, he very much hoped the reputation was undeserved, at least in his lifetime.

I think the thought that other people in Pamlico County looked at his island home that way wounded him.

My friend is one of the sweetest, kindest men I know, and a real gentleman: I know that he could not help but feel hurt that his neighbors in the surrounding communities had felt that way about Goose Creek Island.

Yet the island’s reputation was undeniable, he told me. And later that day, when we went down to the local fishing docks, we talked to other islanders that confirmed what he had told me.

So I was a bit flummoxed. When my friend informed me that no black people had lived on Goose Creek Island for generations, and that the county’s black citizens historically have looked at the island with distrust and fear, I couldn’t help but wonder: was it all a misunderstanding?

Or is it possible that something happened when he was a child, or even before he was born?

Or something like what happened at Knotts Island around 1898?

By that, I basically mean white racial terrorism that was part of the white supremacy campaigns that took power in North Carolina between 1898 and 1900.

The most complete book on Goose Creek Island’s history does point in that direction: In The Goose Creek Islander, 1874-1974, Helen B. Williams wrote that at least seven black families lived on the island prior to 1900.

They were all gone by 1903. It was a pattern repeated in large parts of the North Carolina coast at that time.

So far I have not found any evidence that would fill in the details of what happened at Goose Creek Island at that time.  As is so often the case, I was left to wonder what was being remembered and what had been forgotten.

And, of course, I could not help but wonder if my friend did not know that he had grown up in a world of silence and forgetting, as is so often the case for us all, wherever we call home.

Years later, I stumbled upon a story about Goose Creek Island. I found the story in a rollicking travel account written by a former reporter for the Salisbury Post, in Salisbury, N.C.

The reporter’s name was Pete Zimmerman. In the 1980s, he had spent time at a friend’s fish camp on the island. He was clearly besotted by the island’s people and natural beauty.

In his travel account, Zimmerman wrote that the older guys on the island told him that a sign used to stand at the old ferry landing. The sign did not provide any insight into how and why all the black families had left the island, but it did speak to the threat of racial violence that kept the island all-white throughout the 20th century and into the 21st century.

According to Zimmerman, that sign read: “N—– don’t let the sun set on your heels.”

I did not have to discover that the Down East part of Carteret County had also long had a “sundown town” reputation. I had heard it all my life.

When I was growing up near there, the region’s reputation was proverbial: a black man or woman risked their life if they were found anywhere east of the North River Bridge after dark. 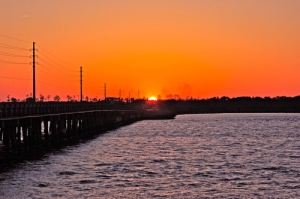 That is a very large area: a 35 or 40 mile-stretch of old fishing and farming villages along Core Sound.

I have many close friends Down East, and one of my favorite cousins lives there, too. Some of the finest, wisest and kindest people I know live there. And I think it’s one of the most beautiful places in the world.

Yet at least when I was young, I frequently heard that warning about the dangers that awaited black people Down East after dark.

Many a time, I heard not so much fear, but disgust and sometimes anger, contempt and loathing in the voices of my African American neighbors when they discussed “the other side of that bridge.”

When I was young, some of the oldest people in my neighborhood also remembered a sign that had once been posted by the town limits of Atlantic, one of the Down East fishing villages.

By now I imagine you can guess what the sign said: “No n—— after dark.”

Nevertheless, for all that, I never once heard of an historical incident that might explain how all those communities east of the North River Bridge gained their reputations as “sundown towns.”

So that I have to say again: we live in a world of silences and we inherit a past about which we are un-briefed and unknowing.

Next up– The Color of Water, part 5– From Nags Head to Wrightsville Beach