Tonight my Black History Month tour of eastern North Carolina’s civil rights history continues with a look at Washington, N.C. in the 1960s and ’70s and the words of Joan Little, a young African American woman at the center of one of the most controversial human rights trials in 20th-century America. 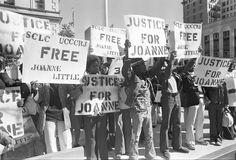 While serving a sentence for larceny at the Beaufort County Jail in 1974, Little killed a white jailer with his own ice pick. The 20-year-old claimed that he was trying to rape her and she had acted in self-defense.

The story  of Joan Little’s murder trial was told around the world. She became an international symbol of the struggle of women, blacks and the imprisoned for justice.

After a lengthy trial in Raleigh, Little was acquitted.

She later told her life story to the playwright/activist Rebecca Ranson. Ranson published a long excerpt from that interview in Southern Exposure magazine in 1978.

In that interview, Little described her hometown and her life in the 1960s and ’70s. The passage below is a quote from that interview.

“After nine o’clock in Washington, there ain’t nobody on the street. You don’t see hardly even three cars coming down the highway unless they’re passing through town. Down there where I live they cut off all the lights, raise the windows up and people sit on the porch till eleven, twelve o’clock because it be so hot to sleep. 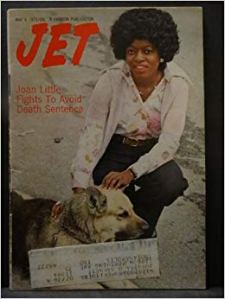 Joan Little on the cover of Jet magazine

“There’s a railroad track that runs down the middle of town and from Fourth Street on back there’s nothing but blacks, the black community. On the left-hand side are all the whites so you know by what street people live on whether they’re black or white.

“If they say Tenth Street, you know you’re across the tracks in the black neighborhood. Most of the black streets are dirt streets.

“The poolroom is on the corner of Fourth and that’s where all the blacks hang at. They go down there long about this time of year, summer when it’s hot, and they drink wine and beer and hang. They sit around and listen to music and play pool.

“There are a few clubs down there like the Elite and the American Legion and there’s Griffin Beach.  It‘s not like a regular beach. It’s just a little road going way back up in the woods.

“When you get down there in the woods, there’s about three little shacks sitting up in there and there’s the whole big Pamlico River to swim in.

“The whites go to a beach called Butchers Beach. They got a paved road to it and it’s real nice. Blacks and whites don’t really do nothing together. Not church either

“I remember there used to be a man, Johnny Rawls, down there in Washington. I worked for him in a cafe, a little small cafe. On the left-hand side was a door for the blacks and on the right-hand side was one for whites.

“If you’d go on the side where the whites was, you just wouldn’t get waited on. You’d just be sitting. It was air-conditioned on the white side.

“On the black side, there’d be things like hot sauce bottles with some salt in them sitting up on the tables. There’d be a jar with some toothpicks sitting up in it. No napkins, no tablecloths or nothing.

“My name is Joan. My past is like a distant nightmare that I don’t want to relive ever again. If I were to pass away, I would of felt like I was just another corpse that was making room for somebody else that was coming into the world that could do something meaningful.”