I’ve been reading an old memoir about Pitt County that I hadn’t thought about in years until yesterday. A UNC-TV reporter was interviewing me, and he asked me if I could think of any white Southerners in eastern North Carolina that had stood up against slavery and racial oppression during the Civil War and Reconstruction Era.

I told the interviewer that I could think of many of them, but the one that first came to my mind was a farmer and country lawyer from Pitt County. His name was Calvin Cox and his son William, an Episcopal minister, told his story in a memoir that was published in 1942.

The Rev. William E. Cox’s memoir describes his father’s life, as well as his own memories of his youth on his father and mother’s farm near Winterville, in Pitt County, in the 1870s and 1880s. The memoir’s title is Southern Sidelights: A Record of Personal Experience.

I dug it out for the first time in ages today and I found it as enthralling as ever. Rev. Cox did not share his father’s beliefs in racial justice or interracial politics, but he loved his father deeply.  He also admired his father tremendously for standing up to the Ku Klux Klan and to the contempt of his friends, family and neighbors that were part of Pitt County’s old slaveholding class.

Today I thought I’d share a little part of the Rev. Cox’s memoir, in case you’re not familiar with it. The passage I’ve chosen focuses on the events that led his father to reject slavery and white supremacy and on some of the costs that his father paid for that moral stance.

I’ve broken up some of paragraphs in this excerpt to make them shorter and more readable.

Also, be sure to keep in mind that at that time, unlike today, the Democratic Party in North Carolina was the self-proclaimed “party of white supremacy.” In North Carolina and the rest of the South, the Republican Party was still associated with President Lincoln, the Emancipation Proclamation and African American civil rights.

These are the words of the Rev. William E. Cox:

I was born in 1870, five years after Appomattox, in Greenville, the county seat of Pitt County, one of the eastern counties in North Carolina; and I grew up under the conditions that prevailed in the South immediately after the Civil War.

A former Confederate officer named J. J. Laughinghouse was one of the founders of Pitt County’s Ku Klux Klan in 1869. He wrote that the Klan’s goal was “the preservation of the Anglo-Saxon race.” From Henry T. King, Sketches of Pitt County (Raleigh, 1911).

My father was a farmer-lawyer in that town and while not wealthy, he was in comfortable circumstances. When I was about three years old he moved into the country, for reasons of which I will speak later. He had two farms of his own, but in order that my mother might be near her people he built a modest home on her share of her father’s plantation, and there I grew up.

My father’s father and my mother’s father were both farmers, both slave owners, both Democrats, and both believers in the Secession of the Confederate States; but in spite of his family and his Southern lineage my father felt moved to pursue a course that neither his father nor his friends approved, and which he knew was generally unpopular.

My father was a calm, quiet, gentle, and very patient man. . . .He had a very kind heart, full of tender and sincere sympathy for any person in trouble, whether rich or poor, high or low, white or black.

Add to all this the fact that, underneath his calm exterior and his ready sympathy, he possessed both physical and moral courage to a rare degree, and you have a picture of the man; also the secret of his character and of the extraordinary course that he deliberately chose to follow.

As I stated above, my father was the son of a Southern Democrat who was a landholder and a slave owner, hence he was brought up in the atmosphere of the Old South and its traditions; so to make his course understandable we must take note of some of the experiences that influenced him profoundly….

One of them involved a hunt for a runaway slave in Pitt County before the Civil War.

In another part of the county from which my father lived there was a prominent man who was of the Simon Legree type. [Legree was the ruthless planter in Harriet Beecher Stowe’s bestselling novel Uncle Tom’s Cabin.] He not only had the reputation of being cruel to his slaves, but kept a kennel of bloodhounds with which he hunted down his own and other runaway slaves.

Cartoon in an Alabama newspaper threatening scalawags (the victim on the left) and carpetbaggers (on the right). “Scalawags” was a derogatory term for southern born whites that supported the Republican Party and Radical Reconstruction after the Civil War. Calvin Cox’s enemies would have considered him a scalawag. From the Independent Monitor (Tuscaloosa, Ala.), Sept. 1868.

On one occasion my father, then a young man, chanced to be in that neighborhood when there was to be a “negro hunt” and he was invited to join in the chase.

From the time the hounds struck the trail till the hunters cut down the tree up which the exhausted negro had climbed, my father was with those who followed the pack, and saw the cruel end of the hunt.

So deeply did this experience burn itself into his soul that he gave evidence of deep emotion as he told it to me many years afterward.

All of these things weighed heavily on the heart of my father and figured in his decision to take the course he did take—a decision which, at that time and in the Old South, called for moral courage to the nth degree.

When the Southern states seceded he refused to support that action, in spite of the fact that his own father, his neighbors and his friends were Democrats and Secessionists. He refused to accept his share of his father’s slaves, and resolved to do all his power to free all slaves.

One who did not live in the South… can hardly understand and appreciate the depth and intensity of feeling in the South toward the North in general and the Republican Party in particular.

There was still fiercer intensity of that feeling toward a [white] Southerner who opposed the Confederacy and aligned himself with the Abolitionists and the Republican party. That, in the eyes of the [white] rank and file in the Confederate States, was “the unpardonable sin.”

Where the people of a whole section of a state took this stand, as for instance in East Tennessee and West Virginia, the individual did not suffer so much because he was in a considerable group of like-minded people; but for an isolated individual in a community predominantly Southern in sentiment to take such a stand, he practically delivered himself to a living death.

All of this my father understood, yet he calmly determined to turn his back on slavery and the Southern Confederacy and take his stand with the Abolitionists under the leadership of Abraham Lincoln.

Say what you may, that was an exhibition of moral courage to a superlative degree.

Social ostracism, persecution, slander, and all sorts of indignities were heaped upon him by kinsmen, neighbors, friends and others, to the day of his death; yet never once did I hear him complain or embittered about it.

He knew all of that would come to him when he took his stand, but his conviction was as deep and his heart as true as was that of those from whom he parted company; and with never a sign of regret or turning back he continued to the end of his life true to his conviction.

I did not follow him into the Republican party. I was and still am a democrat with a big “D,” but I reverence the memory of my father—one of the kindliest, truest and noblest men I have ever seen, and with moral courage the like of which is seldom manifested.

He chose his cross because he thought it would contribute to the deliverance of fellow men over whose lot he had occasion to mourn, and he bore that cross without a murmur.

My father was a great reader, and as a young man acquired a number of standard law books and studied law at home. He was later admitted to the bar and moved to the town in which I was born, where he opened an office and hung out his shingle.

Almost immediately attacks of various kinds began to be made on him and such terms as “black Republican,” “nigger lover,” “carpet bagger” and “scalawag” were hurled at him. 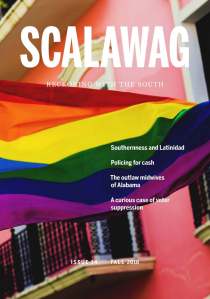 In Scalawag Magazine, a new generation of Southerners has been reclaiming the term “Scalawag” and turning it into a symbol both of regional pride and defiance of white supremacy and oppression. To learn more about Scalawag Magazine, check out its web site here or its Facebook page here.

At night the windows to his office were often smashed, his sign torn down, and even the interior of his office at times left in confusion..

For a considerable time he patiently repaired the damage, but at length he worried of this treatment and moved back to the farm. There he built an office by the side of the road and in a small way continued to practice law, along with his farming.

At the age of 65 he died, still calm, serene, unembittered—and a Republican. Call him, if you wish, any of the names that were hurled at him in the dark days after the Civil War, or think of him any way you will, he was one of nature’s noblemen.

I am proud to have had such a father, and I reverence his memory today as sincerely as I loved him when he was alive.  May his soul rest in peace, and may his virtues descend to his children and his children’s children to the thousandth generation.

The Rev. William E. Cox’s father lived from 1827 to 1894. He made his living mostly by farming and he and his two wives raised William and his 9 brothers and sisters. While  he was a county commissioner after the Civil War, the Ku Klux Klan and similar groups repeatedly targeted him. First established in 1869, the Pitt County Klan was very active and very violent, repeatedly terrorizing African Americans and “scalawags” such as Calvin Cox. Judging from the historical record, Pitt County was the site of an almost nonstop guerrilla war well into the 1880s.