When Dr. Linwood Watson and I visited last winter, he also told me about an extraordinary project that the Coharie Tribe in eastern North Carolina has undertaken to deepen their ancestral ties to the river and the land that has been their home for centuries. 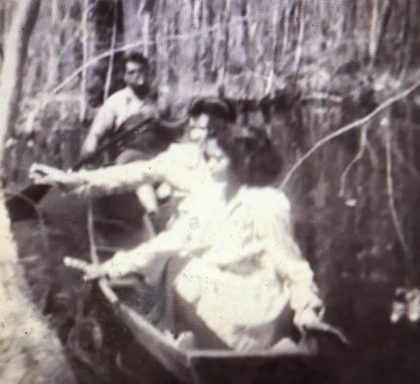 The Coharie reside largely along the banks of the Great Coharie River in Sampson and Harnett counties, 60 miles south and a little east of Raleigh. The tribe’s current membership is a little more than 3,000 people and most live in the communities of Holly Grove, New Bethel, Shiloh and Antioch.

The Great Coharie River rises in the central part of Sampson County and winds south for nearly 50 miles. It eventually merges with two other streams and forms the Black River, the legendary river of ancient cypress groves.

I drove through there a few days ago on my way to visit my brother and his wife and it is incredibly beautiful country– verdant and green and full of creeks and swamplands bursting with life.

Boiling sorghum to make syrup. From “The Coharie Tribe: Soil, Sorghum and Sovereignty”

According to tribal historians, the Coharie settled on the river in the time period from 1729 to 1746. Before that time, they resided to the east, in the ancestral homeland of the Neusiok Indians, in the part of the North Carolina coast where I grew up.

When they left that part of the coast, they did so because their old home had been devastated by the Tuscarora War.

The Tuscarora War lasted from 1711 to 1715. In the decades after the fall of the last Indian towns, the war’s survivors scattered far and wide. Some migrated to other colonies. Some took refuge deep in coastal swamplands, and some eventually began a new life on the banks of the Great Coharie River.

Produced by the Coharie Tribe, the 15-minute video is called “The Coharie Tribe: Soil, Sorghum and Sovereignty.” The video highlights the Great Coharie River Initiative, which has involved volunteers cleaning up a 13-mile-long stretch of the river and making it navigable again.

The video also highlights the tribe’s annual sorghum harvest and the making of a glorious, five-acre tribal garden that is not just about growing food, but also community.

In the video, the tribe’s administrator, Greg Jacobs, describes “the medicine of working in the garden,” which is something I can relate to.

As I watched the video, I also loved seeing older people and children working together in the community garden’s sorghum patch and at its sorghum mill. Aside from growing foods that are healthy and affordable, “it makes us happy and it feeds our soul,” Jacobs says.

At the end of the video, Jacobs also talks about spirituality and the river, and what it means to the tribe’s members to have restored the river to health and made it once again accessible.

“Economic opportunity has been brought to the entire county through tourism as people come to hike and paddle on the river.”

For years storm damage and debris had made the Coharie unnavigable, but now kayakers and canoeists can paddle, hunt and fish on the river. From “The Coharie Tribe: Soil, Sorghum and Sovereignty”

“We helped the river by clearing the debris out of the river and unstopping its veins so it could flow again and it helped us by exciting our souls and giving us a sense of belonging,” he said.

He then goes on to say:

“When you came to me, you were running from oppression and conflict and you were looking for a place just to raise your family to keep them from being annihilated—I was here.”

One thought on “On the Great Coharie River”