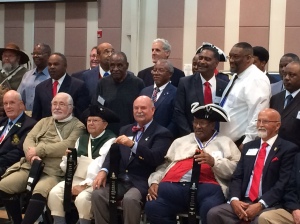 Here is a sentence that I thought I’d never write: one of the highlights of my year was my induction into the Sons of the American Revolution.

That happened in September, almost a year ago.

It was a lovely evening. The event was the group’s chartering ceremony. It occurred at the Havelock Convention Center, a new meeting hall and museum in the little town in eastern North Carolina where I grew up.

Scores of national and state SAR dignitaries traveled hundreds of miles to be there with us. One of the national vice-presidents gave a deeply moving speech on how long overdue it was for the SAR to have its first predominantly African American chapter.

The Harlowe Patriots is the first majority-black chapter in the SAR’s 125 year history.

We must seem like an unlikely place to make history.  Ours is a small, unincorporated rural community east of Havelock and the Cherry Point Marine Corps Air Station. Historically local people made their livings by farming, fishing or logging (and many still do), though the military base is now the community’s largest employer.

In the 18th century, Harlowe was home to an important community of free people of color. At least 14 local men of African ancestry served in either the local militia or the regular army on the side of the revolutionaries.

Their descendants founded the Isaac Carter chapter of the SAR– the Harlowe Patriots for short.  They also discovered a revolutionary war ancestor for me and invited me to become one of the chapter’s charter members.

At the convention center that night, the SAR leaders often talked about how the Harlowe Patriots was making history. To our surprise, they also thanked us for helping SAR chapters across the U.S. to discover the lost history of African Americans in the American Revolution.

Our chapter’s president, Ed Carter, also gave a deeply stirring speech that night. He spoke of America’s greatness being rooted in its diversity.

At the end of the ceremony, the organizers gathered us all together for a group photograph: Ed, in front, in a colonial outfit, a legion of SAR leaders and all the rest of our local chapter, nearly every last one a veteran of the U.S. military (except for me and our youngest member, a high school student).

In this age when so much seems to be tearing us apart, I don’t know if I can put into words how good it feels to be part of something that honors our shared past and brings us together. That night in Havelock was unforgetable, and I am proud to stand with my new brothers as a Harlowe Patriot.

This is the first in an occasional series of notes on life here in North Carolina.

2 thoughts on “The Harlowe Patriots”