This is the 2nd, 3rd & 4th in a series of historical photographs that I will be posting here every now and then. The photographs will all highlight maritime life on the North Carolina coast between 1870 and 1941.

The second photograph shows two sailors mincing blubber in preparation for putting it into the try-works, two giant iron pots that held roughly 180 gallons each, fixed into brick furnaces and used to extract the blubber’s oil. 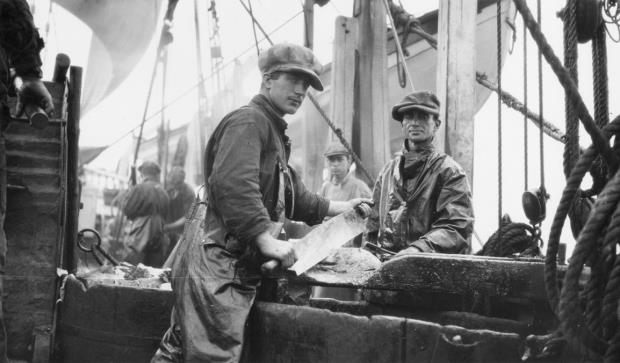 The third photograph depicts one of the hands using a copper bailer to ladle the hot oil, fresh from the fire in the try-works, into a cooler. The cooler was a tank, also copper, lashed to the try-works. Once the oil was no longer scalding hot, the sailor opened a valve in the cooler’s bottom and let the oil flow through a pipe into storage tanks below deck.

A crew of 22 manned the John R. Manta on this last voyage to the Hatteras grounds. The vessel’s master and principal owner, Antone J. Mandly, was a 62-year-old veteran whaler who had first gone to sea at the age of 11.

Like so many New Bedford whalemen over the previous century, he was originally from the Azores, a chain of Portuguese islands in the mid-Atlantic, 950 miles west of Lisbon. His brother and nephew had also been captains of whaling ships. It was said that they captained more whaling voyages—a total of 51—than any other family in the history of U.S. whaling.

W.H. Tripp, his guest on the John R. Manta’s last whaling voyage, observed that Mandly “was thoroughly imbued with the autocratic life of the quarter deck.” That was a gentle way of saying that he was a hard-driving task master, firm in his ways and not shy in his use of discipline.

The second mate, a Mr. Crowie, was an Englishman by birth. The other boat steerer, Ben Cleveland, was born in the U.S., the son of a well-known whaling ship captain and sea elephant hunter.

The rest of the crew was American, English, Portuguese, German, Irish and Canadian. It was, in short, a typical New Bedford whaling crew.

The ship’s officers and boat steerers were old salts, but only two of the men “before the mast” were sailors: a fisherman named Dwyer, who came from Newfoundland, and Dean, a young American who had some experience on steamers.

The rest of the crew were “green hands”—mill workers, farmers, a rope worker, etc., who were at sea for the first time. A Boston shipping agent had recruited most of them under false pretenses: he had told them that they would be sailing for the West Indies and that they would make $700.

The shipping agent had also failed to mention that they would be serving on a whaler. That would almost surely have been a deal breaker: whaling ships were notorious for their danger, hard duty and low pay.

After 3 and ½ months at sea and killing and rendering the oil from 30 sperm whales, the John R. Manta’s forecastle hands were all in debt to the captain. Their share of the vessel’s “lay” was small, and the captain deducted the costs of clothes, shoes, bedding and tobacco from their share before paying them off.

When they stepped off the wharf in New Bedford, they had the customary succor for whaling hands in their pockets: a $5.00 bill.

2 thoughts on “On the Hatteras Grounds 2”