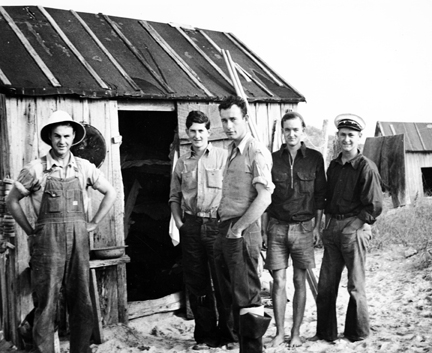 Young fishermen in camp at Brown’s Island. A pair of heavy ash push-poles or long oars rests against the tar paper-and-slat roof of one of the camp cabins. On the far left, behind the young man in bib overalls and a pith helmet, a line of cork floats dangles from a nail. A cooking pan hangs on the wall behind him, and a washbasin sits on a shelf next to the cabin door.

The two men standing to the right of him are wearing what appear to be Civilian Conservation Corps (CCC) uniforms. The young man in the middle has on high-topped Wellingtons, rubber boots popularly known as “willies.” On the far right, laundry dries on a line behind the fellow in the captain’s hat.

This is the 6th in a series of Charles A. Farrell’s photographs from Brown’s Island, in Onslow County, N.C., in 1938. An earlier version of this story appeared in Southern Cultures, a quarterly journal published by the UNC Center for the Study of the American South.

Charles Farrell did not identify any of these young fishermen by name. However, descendants of the Gillikins and Lawrences who fished at Brown’s Island gathered not long ago at a community supper at Harkers Island, N.C., and inspected the photographs with me.

They identified two of the fishermen in this photograph with some certainty: the young man second from the left as M. T. Gillikin, and the one on the far right possibly as James Lawrence. James Lawrence died a few years later in the Second World War. 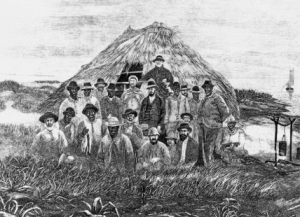 That younger generation of Gillikins and Lawrences continued a long tradition of mullet fishing at Brown’s Island. Charles Farrell noted that the Gillikins, in particular, had fished for mullet and spot on the island “from time immemorial.” In earlier days, the fishermen often lived in round huts that they built with conical roofs and thatched with salt marsh rushes, but in most other ways the operation of the mullet fishery had changed little over the years.

“A great legend has grown up around these people,” Farrell noted on the back of this photograph’s original print. He wrote that the great-great grandfather of these young Gillikins was “the Paul Bunyan of the Carolina Fisherfolk.”

Farrell could only have been referring to Decatur Gillikin, a mythic figure in Down East lore. If you believe the stories told about him, Decatur Gillikin could row a boat faster, lift nets heavier, and catch more fish than any man alive, before or since.