All photos from the Kinston Music Park, Kinston, N.C. All photos by David Cecelski

One of the things I like best about the Kinston Music Park in Kinston, N.C., is the way it doesn’t just honor the great jazz, blues, gospel, rock, big band, rhythm and blues and hip hop artists that came out of Eastern N.C.—the park also honors the band teachers, choir directors and music educators who made that rich history of African American music possible.

So yes, when you’re exploring the Wall of Fame that runs along the back of the park, you’ll learn about Thelonious Monk, the great pianist virtuoso and jazz composer who was born in Rocky Mount.

And of course you hear about Billy Taylor, the legendary jazz pianist and teacher from Greenville.

You might know Taylor best for writing and recording ‘I Wish I Knew How It Would Feel to be Free” in 1963. It was an achingly longing, almost prayerful anthem for the civil rights movement in the 1960s. I’ll provide a link to Taylor playing the song here. 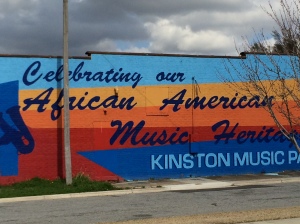 Nina Simone’s is the classic vocal version of Taylor’s song, and Emeli Sande did a memorable cover just a few years ago, too.

Of course, many people in eastern N.C. remember Billy Taylor for his incredible work at ECU’s School of Music later in his life. The school still holds the Billy Taylor Jazz Festival in his honor.

At the Kinston Music Park, you also get to know the legendary soul and funk saxophonist Maceo Parker, who still tours with his own funk orchestra when he’s not home in Kinston.

I spent a memorable day with Maceo Parker 10 or 15 years ago, when he was home during a break in one of Prince’s world tours. We mostly talked about his musical upbringing in Kinston. I don’t think we even got to his groundbreaking work with the James Browns Band and Parliament-Funkadelic.

You can find a link to my story on Maceo Parker here.

Four other Kinston musicians also performed in James Brown’s band in the 1960s. One was Maceo’s older brother, drummer Melvin Parker. At the Kinston Music Park, you can learn about them all—as well as about their musical mentors, whether they were at school, in the church or in the local clubs.

You can even hear about Eva Narcissus Boyd—a.k.a., Little Eva. The former Kinston resident has gone down in history for one great song and an unforgettable dance—“The Loco-Motion,” her #1 hit in 1962.

You can see Little Eva doing “The Loco-Motion” at this YouTube link. 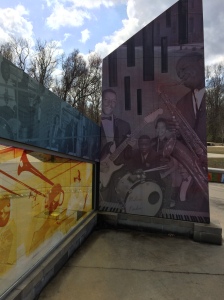 But the history of African American music traditions that you find at the Kinston Music Park is hardly just about the big national names from that part of eastern N.C.

You’ll also find musicians like Geneva Perry. Ms. Perry was a local legend, but not a performer on a national stage, or at least not one for very long.

For a time, she did play saxophone with the International Sweethearts of Rhythm, a popular, all-female, multi-racial jazz and swing band that toured the country in the 1940s. 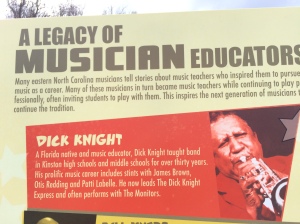 But Ms. Perry really found her calling in a long, brilliant career as a band and music teacher at Kinston’s Adkin High School. She brought music to untold thousands of children, and she inspired a whole generation of local musicians to go on to great things.

As you wander through the Kinston Music Park, you’ll also discover Dick Knight, who taught band in Kinston schools for more than 30 years. He, too, was no ordinary talent—when he wasn’t teaching, Knight did stints with James Brown, Otis Redding and Patti Labelle.

Eleanor Harris, music educator and choir leader at Adkin High in Kinston and at Dillard High and Goldsboro High in Goldsboro, N.C.

And you’ll meet chorale teachers like Eleanor Harris, who made an irrepressible mark on the local music scene by leading acclaimed choirs and choir clubs at schools in Kinston and Goldsboro. 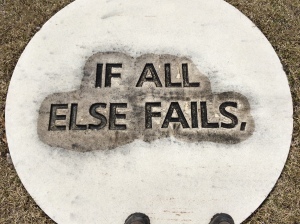 I’ve never seen a park like this—you can almost hear the music rising up out of the local churches, schools and nightclubs when you’re there.

As trumpeter and music educator Dick Knight is quoted on one of the park’s signboards, “It’s just something about Kinston that’s musical.”

You’ll discover musicians from earlier ages, like the Mitchell Christian Singers from the 1930s and ‘40s, and you’ll find younger talents, like hip hop artist Petey Pablo from Greenville and poet/musician/activist (and my pal) Shirlette Ammons from Mt. Olive in Wayne County.

The park tells the story of African American music in eastern N.C. through exhibit panels, a big mural that you can’t miss when you’re on Queen Street, a powerful and thought-provoking sculptural work that ties it all together, and a series of tile mosaics made by two artists, September Krueger and Anne Brennan, in collaboration with a group of local teenage girls.

But there’s also something else: wherever you walk in the park, you find the words of local musicians etched onto paving stones and walkways. 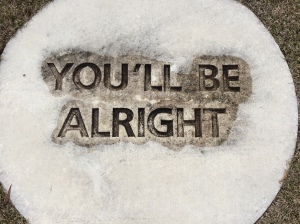 Those inscriptions go beyond the everyday. They seem, appropriately, to speak to something at the foundation of all that music. Their words seem to flow out of a deep down place within us, like a great underground river that runs under all things.

The Kinston Music Park is located at the corner of South Queen and Spring Hill Streets in downtown Kinston. To learn more about the park, be sure to check out www.AfricanAmericanMusicNC.com. The project’s guidebook, African American Music Trails of Eastern North Carolina, by Beverly Patterson and Sarah Bryan, with Michelle Lanier and Titus Brooks Heagins, is one of my favorite things written about eastern N.C. in years.