When my wife and I visited New York City a couple weeks ago, we stayed at a hotel next to the Jewish Museum. I had never been to the museum, and on the morning before my wife gave a lecture at Mt. Sinai Hospital (the reason for our trip), we visited the museum.

The Jewish Museum’s collections cover 4,000 years of history and include 30,000 objects of art, Judaica and antiquities from around the world. But I, of course, Iooked through the museum’s collections for anything related to the history of the North Carolina coast. 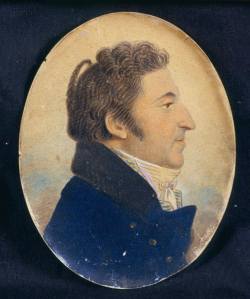 What caught my eye was a profile miniature of Aaron Rodriguez Rivera, a Jewish resident of Wilmington, N.C. in the early 19th century. An unknown artist had painted his profile in watercolor on a rather tiny bit of parchment, 3 and 5/16 inches by 2 and 5/8 inches.

With a little research, I was able to discover a bit about Rodriguez Rivera. I learned that he was born in 1793. He was descended from the family of Abraham Rodriguez di Rivera, a Sephardic Jewish merchant who fled the Portuguese Inquisition in the early 1700s and settled in Newport, Rhode Island.

Beginning in 1536, the Catholic Church and the Portuguese crown persecuted what were called Conversos or Marranos. They were new Jewish converts to Christianity that were suspected of maintaining their Jewish faith in secret in order to avoid persecution.

Many, including the Riveras, had originally come from Spain and had previously fled the Spanish Inquisition.

The Marranos, as I’ll call them, left Portugal and spread across Northern Africa, southern Europe, Asia Minor and the Americas. During a last great wave of Portuguese repression of the Marranos in the late 1600s and early 1700s, a number of prominent Sephardic families made new homes in Newport, R.I., which at that time was a cosmopolitan seaport with strong shipping ties to the West Indies, Western Europe and the Southern colonies.

The oldest synagogue in North America, by the way, is located in Newport. It was completed in 1763.

Aaron Rodriguez Rivera, the gentleman in our miniature, was descended from two of Newport’s most prominent Sephardic families. His paternal grandfather, Jacob Rodriguez Rivera, arrived in Newport in 1748 and is said to have introduced the manufacturing of spermaceti candle-making to the Americas, an important sidelight to the whaling industry.

His maternal grandfather and namesake, Aaron Lopez, was the most prosperous merchant in Newport. He made a fortune in the whale oil business and in a shipping trade with the West Indies of which the slave trade was a relatively small, but still significant part for a time. He also had a shipyard, a rum distillery and several manufacturing enterprises.

Aaron Lopez also developed a significant shipping trade with North Carolina ports, sending at least 37 vessels mainly to New Bern and Edenton between 1761 and 1775. While that trade was never the most thriving part of his business, Lopez built a trade triangle involving Newport, North Carolina and Lisbon, Portugal, with quite a few voyages going to the West Indies as well.

In that way, Portuguese salt made a brief appearance in the Albemarle Sound herring fisheries and madeira in Edenton merchants’ drawing rooms.

According to an excellent 1984 article by John Henry Gerdes in The Lower Cape Fear Historical Society Bulletin, a number of the sons of Newport’s Sephardic families began to settle in Wilmington, N.C. and Charleston, S.C. in the period after the American Revolution.

At that time, there was not yet much of a Jewish community in Wilmington. Mainly German Jews would later establish North Carolina’s first synagogue in the city, but that was not until 1867. In the colonial and Federal periods, the city’s Jews rarely had sufficient numbers to make up a minyan, the quorum of 10 Jewish adults (men at the time) that Jewish law decreed was necessary for holding many prayer services and rituals.

Yet Jewish merchants and traders did play important roles in Wilmington’s early history. As Wilmington began to boom with the rise of its naval stores and cotton shipping trade in the 1830s, the sons of important Sephardic Jewish merchants and traders in Newport and other East Coast seaports decided to try to make their fortunes there. One of them, of course, was Aaron Rodriguez Rivera.

Historical records do not say a great deal about Aaron Rodriguez Rivera’s life in Wilmington, but I did discover that he was a cashier at the Bank of the Cape Fear, the first private bank chartered by the State of North Carolina.

Another prominent Jewish shipping merchant, Aaron Lazurus, was a director at the bank.

The term “cashier,” by the way, had a rather different meaning in the early 19th century than it does today. At that time, the meaning was closer to the Middle French caissier, meaning “treasurer.” Taken in that sense, a cashier was literally “the keeper of the money.”

The religious life of those early Jews in Wilmington was often rather complicated. On the one hand, family ties and the shipping trade kept them connected to more sizable Jewish communities in other seaports on the East Coast—places like Newport, New York City, Philadelphia and Charleston, S.C. Often there was a great deal of going and coming among Jews from those different ports.

On the other hand, in Wilmington itself many of those early Jewish merchants mixed socially with local Christian families and in at least some instances attended Christian churches.

Aaron Lazarus and his family, for one, had a pew at St. James Episcopal Church.

Aaron Rodriguez Rivera likewise attended services at St. James, though I have not found any evidence that he ever converted to Christianity. He did marry a Christian woman, Mary Pierce, however, in 1830, and he was eventually buried in St. James’s cemetery.

The profile miniature of Aaron Rodriguez Rivera at the Jewish Museum in New York City is a small, but important memento of the history of the early Jewish immigrants in Wilmington.

Yet I found it something more, too: the little hand-painted miniature reminds us of a specific Sephardic Diaspora and its influence on the Americas, but it also helps us to remember more generally what North Carolina’s coastal ports were like in the Revolutionary Era and the Federal Period.

Through that little window, we can see an exuberant diversity of peoples, cultures and languages. We can discover wanderers from all over, the uprooted, the children of diasporas, African slaves still bearing tribal marks and all manner of outcasts and castaways, but each of them endeavoring, in their own way, to make a new home here on these shores. 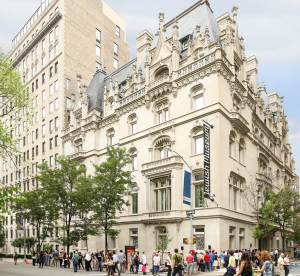 The Jewish Museum covers 4,000 years of history and is home to 30,000 objects of art, Judaica and antiquities from around the world. My wife and I found one of the current exhibits especially enthralling and we think it’s definitely worth a visit– it’s called “Veiled Meanings: Fashioning Jewish Dress,” and is up until March 18.

I found several books and articles especially helpful to understanding Aaron Rodriguez Rivera’s life, the Sephardic Diaspora and Wilmington’s early Jewish history. Among them, I would especially like to acknowledge Richard Brilliant’s Facing the New World: Jewish Portraits in Colonial and Federal America, and John Henry Gerdes’ article, “The Early Jews of Wilmington” in the Lower Cape Fear Historical Society Bulletin’s vol. 28, #1 (October 1984). As always, whenever I am researching anything having to do with North Carolina’s Jewish history, I also found Lenny Rogoff’s Down Home North Carolina: Jewish Life in North Carolina to be indispensible. The Goldring/Woldenberg Institute of Southern Life also has a good historical overview of Wilmington’s Jewish community in its online Encyclopedia of Southern Jewish Communities. You can find a link to that entry here.