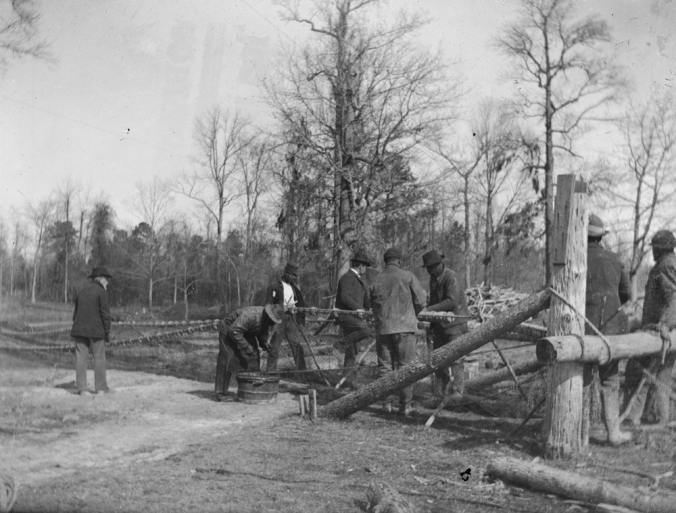 Rigging the seine, Greenfield fishery, Chowan County, N.C., circa 1905. Here on our third day of looking at historical photographs from the great herring and shad fisheries on Albemarle Sound, I’m still focusing on what it took to get ready for taking the great seines and boats onto the fishing grounds.

Yesterday we looked at the process of tarring the seine to preserve it from water rot. Today we have two unique photographs that depict the next step in preparing the seine for fishing: stretching the mammoth cords of rope and netting along a fence and rigging them with thousands of lead weights and cork floats.

In these two photographs, we see men working on the road that ran from the fishing beach to the house of Ed Hassell, Greenfield farm’s overseer. The fishery hands are dressed in oilskin jackets and trousers and sou’westers, reminding us that this was February and even on a day without rain the northeast winds along the Albemarle Sound were bone chilling.

We unfortunately don’t have the names of the fishing hands. The other men we do. In the photograph above, my most important informant, Mrs. Rebecca Wood Drane (via her daughter, Rebecca Warren), identified the man on the far left as George Gilliam from Halifax County. He was the uncle of Frank Wood, Greenfield’s owner, and was visiting from the shad and herring fishery at Drummond Point, which was owned by another member of the Wood family.

In the middle of the photograph, we can see Frank Wood conferring with the fishery hands.

In the photograph below, the man on the far left may be Ed Hassell, who, as I noted above, was the overseer at the Greenfield farm. 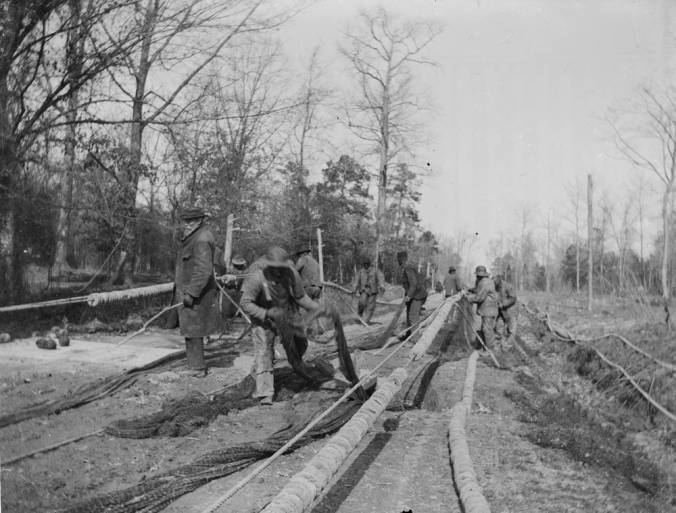 As we saw in our last photograph, tarring the seine was men’s work. However, women did their share of preparing the seine for fishing as well.

Most importantly, Frank Wood hired Sallie Harrell, a farmer’s wife from Yeopim, in Hertford County, to tie his seine to the two main ropes, a painstaking process that involved literally miles of twine.

Sallie Harrell’s young daughters, Ethel, Bessie and Maud, helped her. Once the seine was tarred, the fishery’s workers spread the mass of rope and twine out on a fence along that road to the Greenfield farmhouse and attached the corks and weights.

At that time, as now, the large majority of the world’s cork oak was found in Algeria, Spain, Portugal and Morocco. According to his daughter, Frank Wood imported these cork floats from Spain.

I should digress here just a minute to say that North Carolina’s other coastal fishermen at this time—those not employed at a big, heavily-financed enterprise like a herring fishery— rarely used cork or any other imported product for their net floats.

The cost was far too high. Instead of buying cork from the Iberian Peninsula or North Africa, most fishermen made their own floats with local materials—usually out of the roots of the black gum trees that were found in coastal swamps.

A seine was by far a fishery owner’s biggest investment. The one in this photograph was said to have cost $8,000, a phenomenal sum in 1905. The seine spanned a distance of 2,450 yards. When the length of the warps (the hauling ropes) was added in, the total length ran to 3 to 4 miles. Tarring and rigging a seine for fishing was not a small job.

The seine warps were specially made out of “Spooner whale hemp” for Frank Wood by the Plymouth Cordage Company, in North Plymouth, Massachusetts. An iconic brand in the maritime industry, this particular rope was named after Bourne Spooner, the company’s founder.

Founded in 1803, the Plymouth Cordage Company operated the world’s largest rope and twine-making factory. By the date of this photograph, the company employed more than a thousand workers, most of them Italian, Portuguese and Scandinavian immigrants.

You can still see a lengthy portion of the factory’s 19th-century ropewalk at Mystic Seaport, the wonderful maritime museum in Mystic, Conn.

A remarkably long, narrow building (befitting the length of fishing nets or a sailing ship’s longest lines), the ropewalk is my favorite structure in the museum’s spectacular collection of historic maritime trade shops, boatyards and sailing ships.

Like most hemp used in the American navy and merchant fleet in that era, the hemp used to make Greenfield’s seines came from Russia.

As we can see by the name—Spooner whale hemp— the company originally created that particular kind of rope for use in the whaling industry. That tells us something about the size of the largest herring and shad catches at Greenfield.

The Plymouth Cordage Company’s rope walks, by the way, turned out everything from the lariats used in Wild West cattle drives to hangman’s nooses, but the company’s specialty was ropes with maritime uses: fishing nets and, above all, the lines used on sailing ships.

Tomorrow– Herring Week, Day 4– Down to the Shore