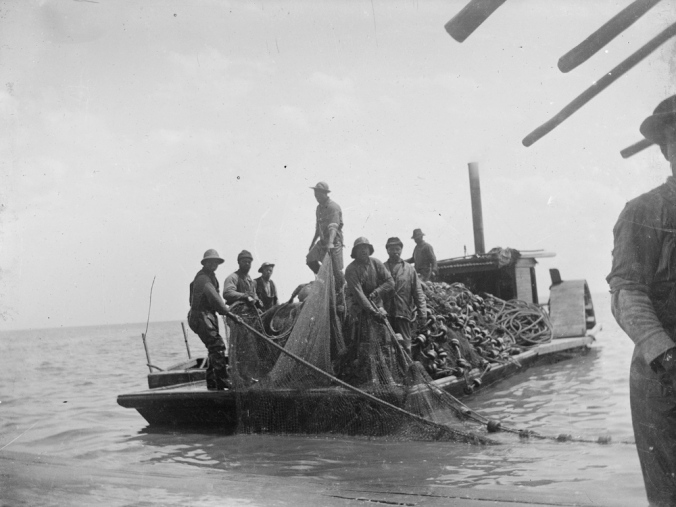 Greenfield herring and shad fishery, Chowan County, N.C., ca. 1905. One of the things that I most appreciate in Mrs. Rebecca Wood Drane’s commentary on these  historical photographs is that she recited a list of all the names of the fishermen that she could remember.

Mrs. Drane, you will recall, was the granddaughter of Frank Wood, the owner of the Greenfield fishery.  When she was a girl, she stayed at Greenfield with her father and mother every year during the fishing season. Sixty years later, she dictated her memories of the fishery to one of her daughters and, 30 years later, her daughter shared them with me.

I know her listing the fishermen’s names is a small thing, but to me it means a lot.

A fisherman’s life was hard, dangerous and often short. In most surviving historical accounts and photographs of the Albemarle fisheries, they remain anonymous figures, unnamed and un-honored.

Not in Mrs. Drane’s notes. She was a young girl when she spent those winters and springs at the Greenfield fishery. Yet, 60 years later, she still recalled quite a few of the fishermen and women and had the conviction that they deserved to be remembered by name.

Elijah Norcom was apparently a very big man. She referred to him as “a giant.”

Mrs. Drane remembered one of the engineers, Armistead Roberts, and one of the bowmen, though only his first name, Cumbo.

She also recalled another boat hand, Isaac Nixon, and a carpenter, Miles Muse. Likewise, she listed several of the women who were fish cutters and net riggers. I have mentioned their names in other parts of this series.

The photograph above presents a good view of fishing hands bringing the seine into shore. We can see the fishing flat’s paddlewheel housing on the right bow, next to the engine room, especially well.

To the left of the smokestack, we can also see the steam whistle’s vent. The boat’s captain, either Mack Towe or Obadiah Faulk blew the whistle on foggy days and on pitch-black nights, as well as when he wanted to signal the other fishing flat after the two boats had separated and begun spreading the seine at some distance from one another.

A “rope boat” floats to the left of the fishing flat. A lone boatman, called a “roper,” used this boat to untie the toggles that connected the seine to one or the other of the warps (the hauling ropes). He did so when the steam-powered windlasses on the beach had hauled the seine close enough to shore that the men on the beach could wade into the water and haul it the rest of the way themselves.

I was not able to determine if any of the individual fishermen named by Mrs. Drane are in this scene. We might be looking at most of them, or none of them. But at least we have those names and these photographs, even if we can’t always put names and faces together.

Today of course is Passover and I wish all our Jewish friends a joyous Passover! It’s a good day to think about the central place that herring has traditionally had in many American cultural celebrations, including Passover. Today many Passover seders will feature herring, including a chopped herring delicacy called forshmak that is especially popular with Ashkenazi Jews.   Once upon a time, at least a little bit of the herring caught at Albemarle Sound fisheries like Greenfield would have ended up at Passover seders all over the U.S.!

I should also mention here that my “Herring Week” series might actually be closer to “Herring Weeks”–  I have ended up with so much material that I’m planning on continuing the series into next week so that we can get a fuller portrait of the history of the shad and herring fisheries on Albemarle Sound.

One thought on “Herring Week, Day 6– The Fishermen”