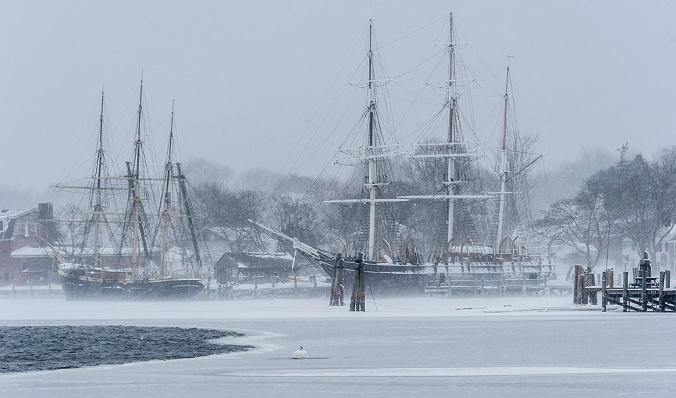 A memory. I am at Mystic Seaport in Mystic, Connecticut. It’s one of my favorite museums: 17 acres of maritime exhibits, historic boats, nautical trade shops, a planetarium, a working shipyard and wharves lined with the country’s largest collection of 19th-century sailing vessels.

Many years after this memory, I also visited my daughter there. She was a student in the Williams-Mystic Maritime Studies Program and held a fellowship at Mystic Seaport one summer.

On one of my visits, a friendly curator opened the museum’s collection warehouse and we browsed the artifacts together. We pulled out drawer upon drawer of treasures, everything from antique ship mastheads to harpoons that Robert Louis Stevenson brought back from Tahiti.

My favorite moment at the Seaport, though, wasn’t in the archives or the collections warehouse, as wonderful as they are.

Instead, it was a morning when my wife and children and I awoke on the Joseph Conrad.

She’s a 111-ft. sailing ship built in Copenhagen in 1882 to train Danish merchant seamen, but she has been preserved and sits majestically at Mystic Seaport’s wharf.

The Seaport’s staff sets aside berths aboard the Conrad for young people attending the museum’s summer schools and camps.  No camps were in session when we were there, so a museum curator kindly offered us a chance to stay aboard the Conrad while we were in Mystic.  She thought the children would enjoy sleeping on the ship, which of course they did.

I’ll never forget the experience. We woke up early and the Seaport was still closed and we were completely fogged in. The fog was low on the Mystic River and half-shrouded the wharf district, so that every sign of the modern age was concealed.

My favorite Mystic Seaport poster, maybe because it reminds me so much of that foggy morning when my family and I woke up on the Joseph Conrad. Designed in mid-1970s by Gainor E. Roberts, photograph by Oliver Denison.

What was left was the historic ships and tradesmen’s shops: the blacksmith’s, the cooperage, the sail loft, the livery, the apothecary and on and on, all visible through the fog, but barely so.

Upriver I could make out the ropewalk, my favorite of the historic buildings in the Seaport’s wharf district: it’s a long narrow building that was once part of the Plymouth Cordage Co.’s massive rope making factory in Plymouth, Mass.

Built in the 1820s, the ropewalk spun and twisted lines of hemp and manila into the great ropes used on the world’s sailing vessels. The company also made the mile-long seine lines (called warps) that fishermen back home on the Albemarle Sound used to catch shad and herring by the millions.

The masts of the tall ships rose on every side of us. A hundred yards downriver we could make out the masts and forecastle of the Charles W. Morgan. With the possible exception of the U.S.S. Constitution, the Morgan has to be considered the most important historic ship in the U.S.

She was built in New Bedford in 1841 and is the only surviving wooden whaling ship in the world. She is breathtaking to behold.

Between the Morgan and the Conrad rested the L. A. Dunston, a sleek fishing trawler built at Arthur D. Story’s legendary shipyard in Essex, Mass. in 1921. She is the last or one of the very last of the great Essex-built sailing vessels that Gloucester’s fishermen used to work the Grand Banks.

At the other end of the wharf, dimly visible through the fog, floated the Emma C. Berry, a sloop-rigged smack built two miles south of there, at Noank, in 1866.

The tall ships at Mystic are all luminaries: the Berry is one of the oldest commercial vessels in the U.S.

All around us, as the sun came up, historic vessels appeared out of the fog. Aside from the tall ships, we could gradually see a host of smaller vessels, some of which were tied at the docks and others moored in the river: a steamboat, fishing and oyster boats, freight boats, a lighthouse tender and others.

Later in the morning, the Seaport’s curators, interpreters and grounds crews would show up. Not long after, crowds of schoolchildren and tourists would pour into the museum grounds.

At first light, I could barely imagine them being there. At that time of morning, we had Mystic Seaport virtually to ourselves.

In the fog and quiet, I could hear only the steps of a watchman and, on the river, a lone oarsman, though I couldn’t see him or her at all.

I heard a horse’s whiny in the direction of the livery and, whenever even the merest breathe of air reached us, I heard the faint rattle and whine of ships’ rigging.  It was a magical moment, that waking up by the sea in the 19th century.