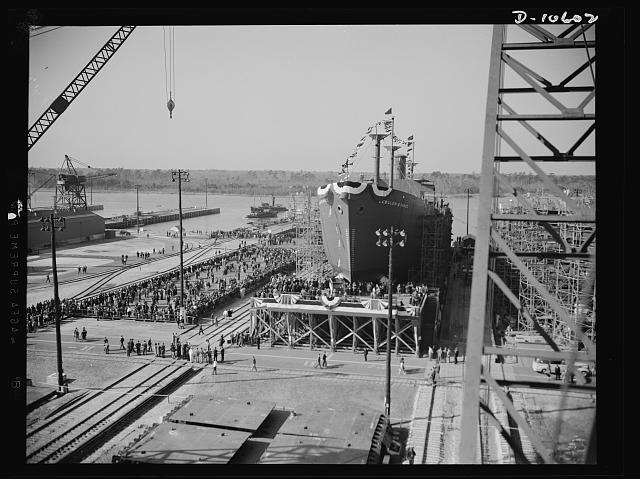 This is the third post in a 7-part series on the great American playwright Arthur Miller’s sojourn in Wilmington, N.C., during the Second World War.

Arthur Miller did more than record the stories of the defense workers that flocked to Wilmington when they were in their mobile home camps. Other scenes unfolded at the shipyard itself. At one of those times, the young playwright stood near the shipyard’s main gate and simply described the shift change.

“As I stand here now, they’re pouring past me,” he narrated.

Miller continued: “There seems no end to the mob of men coming out of the yard, but the work goes on without interruption. There’s children running around looking for their fathers. Wives sometimes come to drive them home. And all over there’s a smoke arising from the thousands of exhaust pipes that are emitting monoxide in the air.”

He saw them, “coming out by the thousands,….: men in steel helmets, looking like soldiers, men in hard hats…, men in caps, felt hats, overalls, dungarees, office workers.” Miller said that the shipyard workers were of all races and probably came from all 48 states.

That day eight buses waited to carry shipyard workers to lodgings in new suburbs and housing projects that had just been built for defense workers in other parts of Wilmington.

Miller interviewed one of the bus drivers, a man whose last name was Howell.

Mr. Howell told him that his riders talked endlessly about the shortage of housing in Wilmington.  The city’s population had doubled in a matter of months and was still growing rapidly.

“Everything is all full up,” Howell explained, even the shipyard’s new trailer park. He was married and had a child and wanted to relocate to a larger apartment himself, but had not been able to find one.

One of the most powerful moments in Miller’s recordings occurred at the shipyard’s machine shop.

Instead of recording an interview in the machine shop, Miller instructed Johnny Langenegger simply to turn on his recording machine and listen.

For a full nine minutes, I heard only the noise of the machinery: a 40-ton crane’s cables creaking, a steady rhythm of riveting, the pounding of hydraulic power tools and, somewhere nearby, metal grinding loudly against metal.

In a draft of the radio script that he later prepared, Miller called it all “the voice of the shipyard.” In the coming months, the shipyard workers slid a Liberty Ship into the Cape Fear River, on average, every 12 days.

To be continued– tomorrow, part 4: “Worse than Hoover time”