This weekend my family and I are in Tryon, N.C. and we are listening to Nina Simone. This is a small town on the edge of the Blue Ridge Mountains and her music just seems to be in the air in this place where she was born and first learned to make music and discovered who she was.

I am hearing her songs in my head, and I am playing them on my devices. I Put a Spell on You, Don’t Let me be Misunderstood, Take me to the Water, Feeling Good, Mississippi Goddam, My Baby Just Cares for Me, I Wish I Knew How It Felt to Free, I Want a Little Sugar in my Bowl and on and on.

We are here for a wedding, but we have also been visiting some of the places that were important to the great singer, pianist, composer and civil rights activist when she was growing up here. 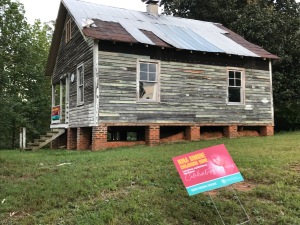 We visited the house in the East Side neighborhood where Simone—her name was Eunice Waymon then— was born in 1933. A group of musicians and artists has recently purchased the home and they are leading efforts to restore it.

We visited her family’s church, St. Luke CME, which is only 100 yards from her childhood home. Her mother, Mary Kate Waymon, was from a family of ministers, and she was a minister at St. Luke’s.

Simone’s father, John Divine Waymon, was a church deacon and superintendent of the Sunday school at St. Luke. 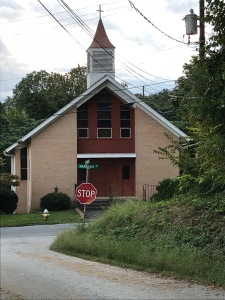 They were a musical family.  Her father had been a performer in his wild, younger days, and her mother played the piano and loved to sing.

In her autobiography, I Put a Spell on You, Simone wrote about her mother’s singing at home:

My first memory is of my mother’s singing. When she was around the house she sang all the time, in a high, trilling voice. She sang the same songs she’d sing at Bible meetings and they became the soundtrack to my infant life: `I’ll Fly Away’ and `If You Pray Right’ or `Heaven Belongs to Me.’ While she baked she would sit me up on the counter-top and give me an empty jam-jar to cut out the biscuit shapes in the dough, singing all the time.

We also walked by the home of Simone’s piano teacher, Muriel Mazzanovich, a white Englishwoman who had settled in the resort town with her artist husband. She began teaching classical music to Simone when she was 6 years old, and she introduced the young pianist to the music of Johann Sebastian Bach.

Once I understood Bach’s music I never wanted to be anything other than a concert pianist; Bach made me dedicate my life to music, and it was Mrs. Mazzonovich who introduced me to his world. I had set out on a journey which became more wonderful and thrilling each week.

Her personal relationship with “Miz Mazzy” also came to mean a great deal to Simone. “In time she became another mother to me,” she wrote in I Put a Spell on You.

We also visited a lovely statue of Simone, seated at a keyboard. Thanks to Simone’s daughter Lisa, the sculptor incorporated some of Simone’s ashes into the figure.

We visited the Tryon Historical Museum, too. An  exhibit at the museum highlights Simone’s career as both a musician and civil rights activist.

We also explored the Lanier Library, a lovely Arts and Crafts building just up the road from the town’s old train depot. The library was possibly the site of an incident that remained one of Simone’s most lasting memories of her childhood.  (Some sources say it was the library–  others, the town hall.) She discussed the incident in I Put a Spell on You.

When she was 11 years old, Simone gave a solo piano recital either in the library or the town hall. She had been the regular pianist at her family’s church since she was 6 years old, but this was a classical recital.

When her mother and father arrived at the recital, they sat in the front row so that they could be closest to their daughter.  However, they were made to move to the back of the room because it was the South in the 1940s and they were African American.

Seeing her parents being moved, the young Simone stood by the piano and refused to play until the event’s organizers allowed her parents to return to the front row. She later recalled that they eventually did lead her mother and father back to their original seats, but they were made uncomfortable by the episode and there was some laughter in the room, too.

Nina Simone and James Baldwin, a photograph in the Nina Simone exhibit at the Tryon Historical Museum, Tryon, N.C.

She was, as I said, only 11 years old at the time, but I think Eunice Waymon—later Nina Simone—was already discovering who she was and from where she came and the power of her gifts.

In a deeply moving passage in I Put a Spell on You, Simone described how the incident changed her.

All of a sudden it seemed a different world, and nothing was easy any more. I really had thought that all white people were like Miz Mazzy…, all kind and elegant, all polite…. But now prejudice had been made real for me and it was like switching on a light.

I started to think about the way I felt when I walked over to Miz Mazzy’s house and crossed the railtrack into the white district. I took to stopping in the drugstore to observe the mixture of indifference and disdain that I provoked in the white customers.

The day after the recital I walked around feeling as if I had been flayed and every slight, real or imaged, cut me raw. But the skin grew back again a little tougher, a little less innocent, and a little more black.