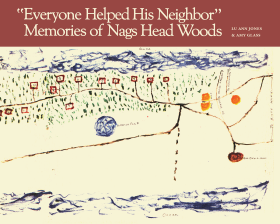 Thirty years ago, Lu Ann Jones and Amy Glass wrote one of my favorite books on the history of the Outer Banks: “Everyone Helped His Neighbor”: Memories of Nags Head Woods.  Long out of print, the book is now available again, thanks to its original publisher, The Nature Conservancy, and to its new distributor, the University of North Carolina Press.

The second edition has a new afterword by Lu Ann and Amy, as well as a new foreword by yours truly.

In anticipation of the book’s re-release party this Thursday in Nags Head, I asked the two authors and their publisher if they minded if I shared the foreword that I wrote for the book here on my blog, and they graciously gave me permission to do so– here’s what I wrote about this very special book.

I am deeply honored to have been asked to say a few words about this wonderful new edition of “Everyone Helped His Neighbor”: Memories of Nags Head Woods. I grew up on the North Carolina coast and I have been devoted to preserving its history and telling its stories all my life.  Lu Ann Jones and Amy Glass’s book has long been one of my guiding lights and belongs on the shelf of every Outer Banks lover’s library.

First published by the Nature Conservancy in 1987, and now re-issued by the University of North Carolina Press, this wise and captivating book was a revelation to those of us who cherish the Outer Banks. Through the voices of Nags Head Woods’ last residents, we came to see and understand the Outer Banks as we never had before.

This book tells a remarkable story. For untold generations, the community of Nags Head Woods flourished on the sound side of Bodie Island, a long, narrow stretch of sand dunes, salt marsh and maritime forest that makes up one of the northern Outer Banks.

On those shores, the Wright brothers made their first flight. Legendary lifesaving crews braved gales and surf to rescue shipwrecked souls. And to this day, you will still find some of the most beautiful wildlife refuges and seashores in America there.

But long before the Wright brothers—and long before any bridge or paved road brought vacation goers and retirees to the Outer Banks— Nags Head Woods was home to a close-knit, salt-drenched community of fishing, farming and waterfowl hunting families that lived nestled between two great sand dunes, Jockey’s Ridge and Run Hill.

To outsiders, Nags Head Woods felt like the end of the world. The broad waters of Roanoke Sound lay to the west, the Atlantic Ocean to the east, no bridges to the mainland until the 1920s and the community’s fate tied to a breathtakingly beautiful, but often perilous sea.

Like the ancient live oaks that sheltered the little settlement, the people of Nags Head Woods bent when necessary, adapting to storms and changing times alike, but they kept their roots deep in the soil and stood strong and steadfast.

Through good times and bad, they made a home in that one part of the island where the dunes towered high enough to shelter their farms and gardens from the salt air and the great storms.

This is their story. And we are lucky to have such gifted storytellers. Lu Ann Jones and Amy Glass are both extraordinary oral historians, trained at the Southern Oral History Program, the University of North Carolina at Chapel Hill’s groundbreaking center that is dedicated to preserving the stories of all those forgotten by history.

Together they sought out Nags Head Woods’ last residents. The island settlement had gradually declined in the early 20thcentury and had faded away by 1950, but the two young historians located many of the last people who had grown up on those shores.

They visited and talked about the island’s history. They listened to stories about childhoods, living off the land and sea, and what the Outer Banks was like before the oceanfront developments and the crowds of visitors discovered the island.

They talked about hurricanes, shipwrecks and a simpler way of life. The islanders told them how they used to haul fishing nets on the ocean beach long after the sun had set, and the beauty of those moonlit nights.

They described plush times, like during the sturgeon fishery’s heyday, when a steady traffic of boats carried the fish’s roe—caviar!— as far as Philadelphia and New York City.

And they remembered the hard times, like the years during the Great Depression when Ester Tillet Beacham saw her mother working herself to the bone. “She worked constantly,” she told this book’s authors.

“She was so tired some nights she didn’t even want to take a bath. Some afternoons she would ask me to draw a pan of water for her to soak her feet in.”

Even in hard times, the people of Nags Head Woods clung to Bodie Island as long as they could. And their words remind us that we can find a path forward in our own hard times, too.

As another Nags Head Wooder, Vandelia Brown, remembered, “Our neighborhood helped each other in times of distress. We found love and concern in sickness and death.”

When this book first appeared 30 years ago, I thought it was a groundbreaking approach to telling the story of the Outer Banks— and I still think so today.

Lu Ann Jones and Amy Glass continue to inspire us by their extensive use of oral histories and by the quiet, but determined way that they place the island’s women at the heart of Outer Banks history.

Of course, a lot has changed on the Outer Banks even in the three decades since “Everyone Helped His Neighbor”: Memories of Nags Head Woods was first published.

Unfortunately, few of the islanders who shared their stories with Lu Ann Jones and Amy Glass remain with us. Time has passed. The memory of Nags Head Woods has dimmed further.

Yet the voices that you will hear in this book are as fresh and relevant today as they ever were—and their stories have only grown more precious.

I recommend that you find a front porch. Sit a spell. Look out on the sea or the salt marsh and spend some time with the people of Nags Head Woods.

Better yet, visit the Nags Head Woods Ecological Preserve, which includes much of the old village’s forests, marshes and ponds. Take this lovely book with you and read it to yourself or read it aloud with family and friends.

See the community of Nags Head Woods come to life again. Get to know the history of the Outer Banks in a deep-down way for the first time. Listen to the voices.

You can order a copy of “Everyone Helped His Neighbor”: Memories of Nags Head Woods from UNC Press here,  Amazon here or from a wonderful independent bookshop on the Manteo waterfront, Duck’s Cottage.

You can also learn about the book’s re-release party later this week here— it’s at 6 PM on Thursday, September 27, 2018, at Waveriders Coffee, Deli & Pub in Nags Head! I hope you can make it– I think it’s going to be a great event.