I found these photographs of child mill workers in eastern North Carolina at the Library of Congress in Washington, DC.  I think they mostly speak for themselves. A photographer named Lewis Hine took them on at least 3 visits to the state between 1908 and 1914. He was employed by the National Child Labor Committee to document the exploitation of children in factories and other workplaces across the U.S. 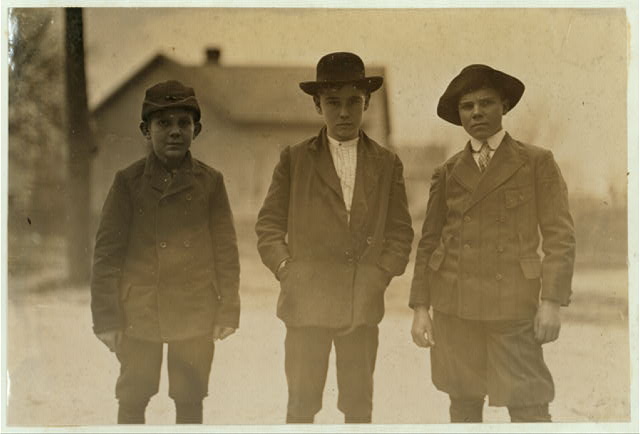 Workers at the Dickson Mill in Laurinburg, in Scotland County. Charley Gregory, the boy in the middle, had already worked in the mill for 8 years. Courtesy, Library of Congress, Prints and Photographs Division

Hine took far more photographs of child laborers in the state’s piedmont and elsewhere in the U.S., but today I want to focus on his photographs from the place where I grew up and that is the focus of my historical work– eastern North Carolina.

A little background history: child labor was legal and common in North Carolina in the late 19th and early 20th century. Educating children was not one of the state’s priorities at that time: work, not schooling, came first. There was no compulsory schooling in North Carolina until 1913 and not much then.

Children and other workers at the Victory Manufacturing Co in Fayetteville, N.C., November 1914. Courtesy, Library of Congress, Prints and Photographs Division

By way of comparison, the state of Massachusetts had passed the country’s first compulsory education law in 1852. Forty-four other states had passed such laws before North Carolina.

The consequences of child labor were high. In the early 20th century, half of the mill family children in North Carolina could not read or write. Injuries and chronic health problems were common. 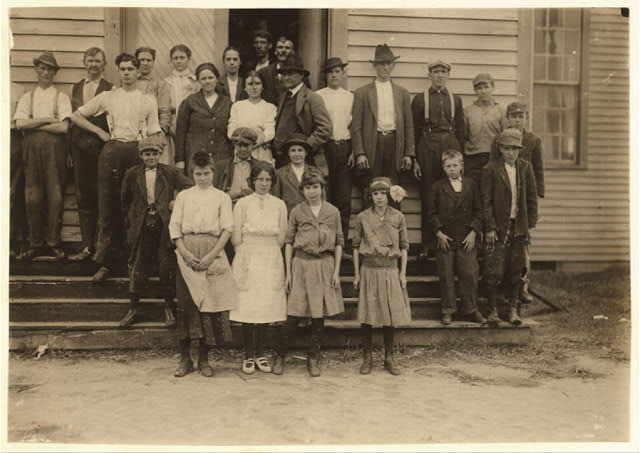 Workers at the Cape Fear Cotton Mills in Fayetteville, N.C. Lewis Hine wrote: “This group represents most of the workers…, except the very smallest. There were 5 or 6 apparently under 13.” Photograph by Lewis Hine. Courtesy, Library of Congress, Prints and Photographs Division.

However, even that 1903 statute had little teeth. It  was rarely, if ever, effective. It did not give any state agency the authority to inspect work sites and provided no penalties for violating the law.

At that time, a quarter of all southern mill workers were between the ages of 10 and 16.

After the passage of the 1903 child labor law, many mills continued to employ younger children, including those under ten years of age.  Hine documented children as young as seven and eight working 12 hour days in cotton mills. 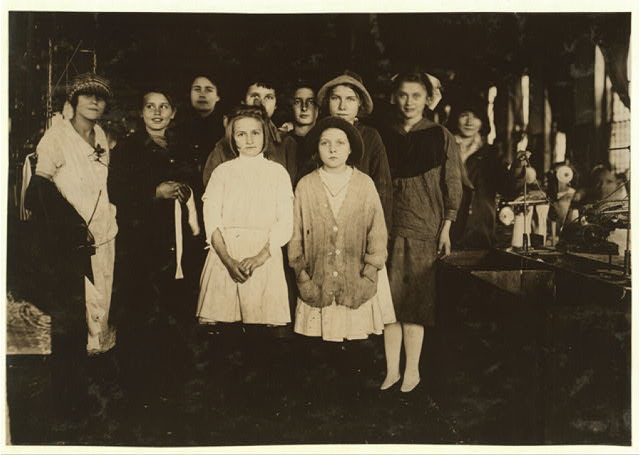 This is another photograph from the Scotland Neck Cotton Mill. Hine described a girl that was apparently 8 or 9 years old working on a knitting machine. Photo by Lewis Hine. Courtesy, Library of Congress, Prints and Photographs Division

Child labor was also common in many of eastern North Carolina’s other industries, including oyster canneries, sawmills and tradesmen’s shops. It was ubiquitous in farming.

Scotland Mills, Laurinburg. November 1914. The tallest boy, Henry Mims, told Hine that he had been working in the mill for 8 years. Photo by Lewis Hine. Courtesy, Library of Congress, Prints and Photographs Division

Many families depended on young children’s mill wages. That income was particularly important in families headed by single or widowed mothers.

In those days, 13 or 14-year-old boys and girls sometimes became the heads of a family. I have done oral history interviews with many individuals that were in that situation when they were children.

I have also talked with people that left school and went to work farming,  fishing, logging or in a cotton mill as early as nine and ten.

The Padgett family, Weldon, N.C. (Halifax County). Alfred, age 13, far right, and Richard, age 11, worked at the Shaw Cotton Mills. According to Lewis Hine, Alfred made $4.00 a week prior to a recent injury on the job (note his bandaged right hand). Richard made $2.40 a week. Photo by Lewis Hine. Courtesy, Library of Congress, Prints and Photographs Division

They usually did so in order to support themselves and younger brothers and sisters after the death or disability of a father and/or mother.

At that time, those children had little or no state or federal “safety net” to help support them after the loss or disability of the family’s adult breadwinners.

Many mothers also brought their children into the mills with them, preferring that the children remained close-by them rather than staying home unsupervised.

In many cases, the family needed the child’s wages. However, many mothers also yearned to hold onto the kind of intimacy with their children that they had known on farms prior to moving into mill towns.

As Lois Epps Jones in High Plains, an Indian community in Person County, N.C., once told me, “If you and your wife work in public, your child will never have the connection with you that we had with our parents, daddy being a farmer. We were taught things. We were around them.”

North Carolina’s piedmont was the center of the textile industry in the South—50% of the South’s spindles could be found in a 50-mile radius of Charlotte. But cotton mills were also important in eastern North Carolina.

One of the state’s first mills, Rocky Mount Cotton Mills, was founded on the Tar River in 1816 and manned largely by enslaved workers. By the late 19th and early 20th century, most of eastern N.C.’s larger towns boasted at least one cotton mill.

In Kinston, for instance, “Cotton Mill Hill” (as old timers called it) was full of families that had fled hard times on farms in Lenoir County. The mill villagers had a reputation for being very poor, uneducated, no-nonsense and tough.

Many kept close ties to their rural roots: tending large gardens, having hog killings and visiting relatives in the country to help with the tobacco harvest and other farm chores whenever possible.

You will notice that all of the children in these photographs are white. That is true even though African Americans and Indians made up a large part of the population in all of the counties that Lewis Hine visited in eastern N.C.  People of color made up the large majority of the residents in at least two of those counties, Halifax County and Robeson County.

Mill owners typically refused to hire African Americans or Indians, adult or children, however. They did not want to engender ill will among white farmers by luring their workers off farms or by fostering competition for labor that would drive up the wages of black or Indian farm workers.

Black and Indian child labor was at least as common as white child labor, though, and probably more prevalent, especially in farming, the lumber industry and other heavy work.

At that time, white farm owners frequently refused to enter into new contracts or renew old contracts if black and Indian tenants or sharecroppers insisted on sending their children to school instead of the fields.

In state labor reports in the 1900s and 1910s, North Carolina’s white agricultural leaders and factory owners repeatedly stated their preference for employing “uneducated negroes.” They believed that education led black workers to demand higher wages and better working conditions or inspired them to leave the area and seek better lives elsewhere.

Many white farmers and factory owners opposed public schooling for black children and refused to hire blacks (adults or children) if they could read and write.

You can see some of the state’s business leaders testimony on that question in the Twenty-Second Annual Report of the Department of Labor and Printing of the State of North Carolina, which was published in 1908.

Lewis Hine took these photographs in Clayton, Fayetteville, Laurinburg, Lumberton, Roanoke Rapids, Scotland Neck and Weldon. He could have gone anywhere in eastern North Carolina, however, and taken similar portraits of children working in cotton mills and in many other jobs. 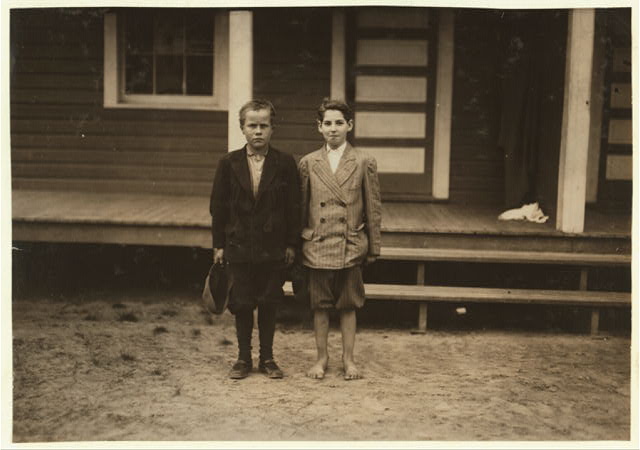 Child labor did not grow significantly less common in eastern North Carolina’s cotton mills or in most other industries until the U.S. Congress passed the Fair Labor Standards Act in 1938. The act was part of FDR’s New Deal legislation in support of American workers.

When I look at these photographs today, I share Lewis Hine’s outrage that kids so young had to spend their childhood’s in cotton mills. We did not have to be that kind of state, and we did not have to treat our children that way.

I also look at the children’s faces in these photographs and I wonder what became of them, and how they did in life. I pray they found love and happiness and their own best selves, despite, as people used to say, coming up hard.

A wonderful web site, Mornings on Maple Street, includes research on what became of some of the children that Lewis Hine featured in his child labor photographs. The web site’s author, Joe Manning, does archival research on the children’s lives, and whenever possible he tracks down their descendants and interviews them.

You can find out what happened to one of the children that he visited in Roanoke Rapids, Simon Birdsong, here. You can also discover fascinating portraits of the Padgett  family from Weldon, including Alice and all of the other children in the family’s portrait earlier in this story.

Among other revelations, you will discover that Simon Birdsong, who was 11 years old when Lewis Hine photographed him, later played drummer for Kay Kyser’s orchestra. Kyser had 11 number one hits and was the most famous Big Band leader to come out of eastern North Carolina in the 1930s and ’40s.

2 thoughts on “On Cotton Mill Hill”