I found Jack Kerouac’s ode to Kinston, N.C.’s old-fashioned chicken coops in the Henry W. and Albert A. Berg Collection of English and American Literature at the New York Public Library.  The Berg Collection holds the letters, original manuscripts and other personal papers of some of America’s greatest writers, including Kerouac, the Beat Generation’s godfather and the man that wrote On the Road.

I was only passing by the Berg Collection. I was doing research in another part of that lovely old building on Fifth Avenue. It’s the public library’s main branch, the one that the famous stone lions guard so dutifully.

But I knew that the Berg Collection had Kerouac’s personal papers and I knew that Kerouac had often visited eastern North Carolina, which is the part of the world where I grew up and which has been the focus of my historical work all my life.

So on my second-to-last day in New York, I made an appointment to look at Kerouac’s papers at the Berg Collection. (The Berg is appointment only.)

The next afternoon I packed up my work in the historical manuscripts room and walked  through the Rose Main Reading Room and down the hall to the Berg Collection in order to see if Kerouac had written anything that I hadn’t seen yet about the places I know and am attached to so deeply.

That’s where I found the little unpublished sketch that began, a bit to my surprise, with poultry.

“It used to be that many chicken coops were built against a tree, and the chickens scratched in the shade with chicken dumbness….” Those are Kerouac’s first lines.

Not what I expected.  The date was March 13, 1951. It’s a typescript manuscript, only a few pages long. To my knowledge it’s never been published. I imagine Kerouac wrote it for himself.

He was 29 then. Born in Massachusetts. Son of French Canadians. Dropped out of college. Kind of dropped out of the Navy, too. Former Merchant Marine.

The little sketch I found is very stream of consciousness and and jumps around a lot. On first reading, I wasn’t sure there was much rhyme or reason to it.

It begins with the tragedy of new-fangled chicken coops. (Tragedy at least in his eyes.)

He goes on about chickens before the war: “… anybody waking up in the morning saw the pleasing shady scene of rickety coops instead of in the new America where they now build small block-houses on flat sandy land outside town….”

Goodness knows what Kerouac would have thought of the poultry agribusinesses around Kinston today: giant slaughterhouses, frozen chicken shipped all over the world and 30,000+ birds in a single coop.

I wonder if the big poultry companies still feed pesticides to their flocks, so that, when they excrete them, it will discourage flies. I’d like to hear what Kerouac would have said about that.

“Any Great Tree of Life”

Kerouac finished his On the Road a few weeks after he penned his chicken meditations in Kinston.

The novel later made him famous. It became the cornerstone of the Beat Generation and inspired poets, writers and some pretty incredible musicians.

The Doors, Bob Dylan, the Beatles and the Grateful Dead all found inspiration in On the Road and Kerouac’s other novels.

He influenced more than one generation. On the Road has never been out of print and annually sells around 100,000 copies.

As late as 1987, the 10,000 Maniacs wrote a sublimely beautiful song called “Hey Jack Kerouac.” Here’s Natalie Merchant introducing and singing the song at her “MTV Unplugged” concert. She co-wrote the song with Robert Buck.

All that lay ahead in 1951, though. Kerouac did not find a publisher for On the Road for six years after he finished it, so he was just another strange Yankee when he was in Kinston.

In the typescript manuscript that I found in the Berg Collection, he continued with his reflections on poultry habitation.

Now, he concluded, “if you want to build a chicken coop it will have to be in the open hot yard and not leaning on any great tree of life.”

“Men that spit and drink and are heaven-going.”

The critics called On the Road the defining book of the Beat Generation. But when Kerouac wrote his elegy to arboreal chicken coops (which quickly morphs into a reflection on the nature of consciousness, the passage of time and the writer’s prospects for capturing the essence of human existence), Kerouac was wandering the streets of a little southern tobacco town thinking about chickens and country music and sounding lonely and hungry and lost.

“You can still hear the strange distant twang of the hills singing in the dark upon a radio, adding and coming in again from WCKY in Cincinnati…”

Maybe he was strung out: he wrote the novel in a dizzying frenzy of non-stop cigarettes and coffee and some say Benzedrine, too.

(The Beats, life was so never enough for them, or maybe it was too much, I don’t know: they were wandering souls, vagabonds, searchers, always restless, always wanting more. To me they always seemed cut off, unmoored, adrift on the sea…, yet sometimes capable of conjuring up achingly beautiful art…. )

Kerouac was visiting his older sister and her family in Kinston when he put these thoughts on paper.

At the bottom of this little piece of writing, he jotted down a few things he heard in the town’s streets.  “Mind your own corn-rows…,” he heard somebody say. The expression was new to him, not being from here.

He also tried out a line or two that seem to come out of nowhere. Down at the bottom of the last page, for instance, he wrote, apropos of nothing, “Men that spit and drink, and are heaven-going.”

It sounds as if he was trying the phrase out for how it would sound in a novel or a poem.

His sister Caroline (he called her “Nin”) and her family only lived in Kinston briefly, but they lived in Rocky Mount for years. It’s not far from Kinston. 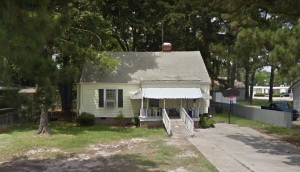 Another great place to learn about Kerouac’s time in Rocky Mount is Marion Blackburn’s wonderful blog Fiction Daily. Blackburn is a native of Rocky Mount and I love the way she entwines her discussion of local places relevant to her own life with those that meant something to Kerouac. This is one of the houses where Kerouac stayed with his sister and her family. It’s on Tarboro St. Courtesy, Google.

“. . . the morning-star appears with dawn, the twangy voices come floating over rooftops where people actually sleep and aren’t hearing with you. . .”

He later wrote most of The Dharma Bums at his sister Nin’s house in Rocky Mount, as well as quite a bit of poetry.

In the stream of consciousness bit of his writing that I found at the New York Public Library (really, it’s like a dam burst), Kerouac said that William Faulkner and James Joyce had come closest to the way that he wanted to write about life.

In addition to literary manuscripts and letters, the Berg Collection also includes quite a number of rather eclectic items that once belonged to famous writers, including a lock of Walt Whitman’s hair, Virginia Woolf’s cane and Jack Kerouac’s boots. This photograph originally appeared in a New Yorker article by Gareth Smit.

He admired them for the ways that their novels captured the unending flow of thoughts and images that make up our existence. 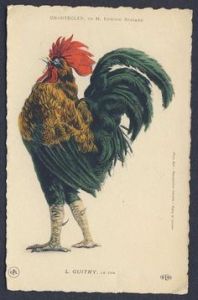 But he wanted something else. He wanted to go beyond them, to writing that was just as teeming with the life within us, but sparer and more to the bone and direct.

“I would prefer imitating great nature once I truly found it as it travels in waves through my brain, as in a dream…”

That day in New York, I imagined young Kerouac walking Kinston’s streets, noticing things, listening to the tobacco farmers, the shopkeepers and the guys at the pool hall. In his mind he filed away their words and the way they looked and the feeling of the place, keepsakes for novels and poems he’d write one day.

Somehow his words reminded me of the long walks I used to take in the night, when I was young and restless and growing up not far from Kinston, in a little town called Havelock, where I wondered if I would ever find love and if I would ever make sense of the world and what waited for me in life.