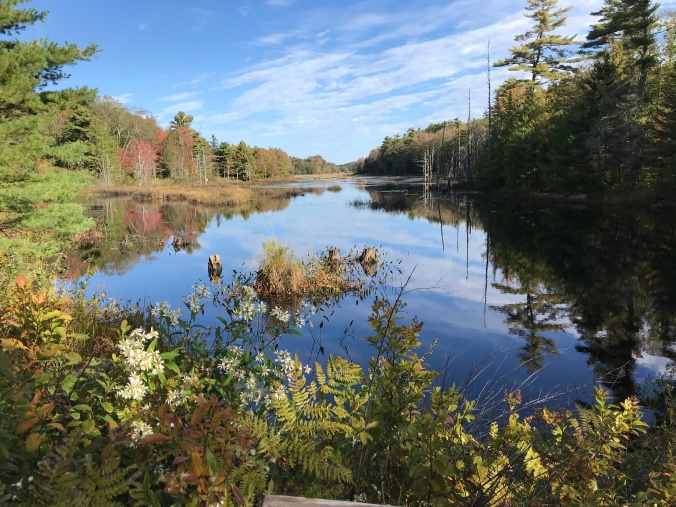 This is the 4th in a series of posts that I’m writing this week as I explore Down East Maine. While I’m here I’m keeping an eye out for historical connections between coastal Maine and coastal North Carolina.

On our drive to Down East Maine a few days ago, we stopped and took a hike at the Lobster Cove Meadow Preserve in Boothbay Harbor. After walking a little ways down the trail through the lovely fall colors, we soon arrived at Appalachee Pond. To my surprise, there we got a glimpse at another historical connection between the Maine coast and the North Carolina coast: the ice trade.

According to a historical marker at the pond’s edge, a local ice company dammed a meadow creek at that site to form the pond in approximately 1880. From that time until 1907, the company’s workers harvested the pond ice every winter and shipped it far and wide.

Appalachee Pond was only one of many sources of natural ice in Maine and New England: all across the region’s frozen lakes and ponds, hundreds and maybe even thousands of farmers, fishermen and woodsmen harvested ice in the wintertime.

Ice companies stored the ice in special, well-insulated “ice houses,” usually built of brick or stone along a river’s banks, until the river’s ice broke up in the spring. Once the river was navigable, workers loaded the great blocks of ice onto schooners that sailed south.

Since practical methods of refrigeration and making artificial ice were not yet available, those sea-going vessels brought cargo holds full of natural ice to coastal communities that were otherwise strangers to summertime ice. 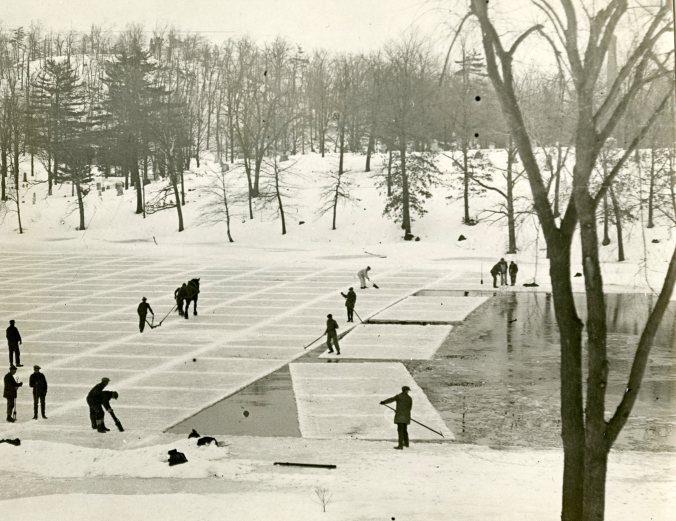 The New England schooners brought much-welcomed ice to hot, humid seaports throughout the East Coast of the U.S., including Charleston, Savannah and Wilmington, N.C.

Some sailed even further. The largest of the New England ice companies sent ice to the West Indies and even as far as Singapore and India!

My friend Beverley Tetterton documented the story of New England’s ice trade with Wilmington, N.C., in a wonderful article that appeared in The Lower Cape Fear Historical Society Bulletin back in 2003.

Map of ice houses on the Kennebec River, Maine, in 1891. From the Maine Historical Society

As Beverly noted in that article, the part of coastal Maine around the Kennebec River was the center of the country’s ice trade in the mid- and late-1800s.

In her article, Beverly documented the first availability of New England ice in Wilmington in the 1820s and ‘30s. One of the early references to the ice trade was a newspaper notice for the rental of an icehouse capable of holding 130 tons of ice in Quince’s Alley in 1845.

“By 1847 the scale of Frederic Tudor’s operation was impressive. From his company alone, 52,000 tons of ice were shipped down the coast to 28 different towns.  In one year, 258 vessels carried ice in this coast-long trade. . .. “

Beverly also described how the availability of ice changed local life, at least for the people that could afford to buy ice:

“At mid-19th century Wilmingtonians took for granted summer supplies of ice. . . Picnics featured ice-cold lemonade. Breweries could operate year-round, instead of just the cold months, because refrigeration was necessary to avoid spoilage. Ice carts and wagons made daily deliveries to homes, hotels, saloons and eating establishments. Farmers could cool their produce and meats at the market house. Of great importance to Wilmington was the ice supplied to a growing seafood industry.”

A Childhood Memory of Ice

I remember doing an oral history interview near my hometown, Havelock, N.C., in which an elderly woman described the excitement of having ice for the first time.

She lived in an African American community called Little Witness (on the site of what is now the Cherry Point Marine Corps Air Station) and was describing her childhood in the 1920s and ‘30s.  She told me that the only time they had ice was once a year at a big community picnic that was held in the hottest part of the summer. 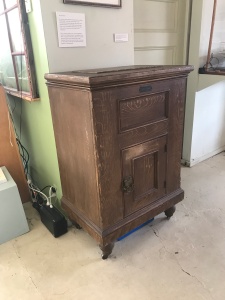 Ice boxes like this one, made by Eddy & Sons and sold by the Lewis & Conger Co. of New York, were found in many homes in the late 19th and early 20th century. This one is on display at the Great Harbor Maritime Museum here on Mount Desert Island, which once had a flourishing natural ice trade. Photo by David Cecelski

A horse-drawn wagon brought the ice from New Bern, 30 miles away, and they used the ice to cool fresh-squeezed lemonade. The cost and their distance from New Bern explained why they didn’t have ice more often, but in a way, the woman told me, that only made that one day more special.

Never, she told me, had an iced lemonade tasted so good to her since those summer days of her childhood.

I will never forget how excited she was by the memory of that one barrel of iced lemonade a year.

Of course I am thinking about her because I wonder if that’s how many people in coastal towns such as Wilmington felt when the shipments of New England ice first began to arrive at their local wharves.

According to Beverly’s research, the arrival of natural ice from Maine and other New England states ended around the turn of the 20th century.

The first practical ice making machinery was patented in the 1850s. However, commercial refrigeration and ice making technology didn’t reach North Carolina until 1885.

In that year, W. E. Worth & Co. opened the state’s first artificial ice factory in Wilmington. The last delivery of natural ice to Wilmington that Beverly found in her research arrived on the schooner Albert T. Stearns from Bath, Maine, in 1902.

The ice trade is yet another historic connection between coastal communities here in Maine and those back home on the North Carolina coast. To learn more about the ice trade, you can find Beverly’s article, “Wilmington and the New England Natural Ice Trade, 1817-1900” in The Lower Cape Fear Historical Society Bulletin here.