Overhead view of me and the shad boat Ella View at the N.C. Maritime Museum’s boat shop in Beaufort, N.C. Built by George Washington Creef in 1883, she was there for routine maintenance but is usually housed at the Roanoke Island Maritime Museum in Manteo, N.C. Photo by Tom Earnhardt

This is the 7th part of my special series “The Story of Shad Boats.” The series features Earl Willis, Jr. and Mike Alford’s extraordinary journey to document the history of North Carolina’s “state boat.”

With its round bottom and sleek, curving lines, a shad boat was a sea-kindly craft, well adapted to working in rough waters and in the fierce  winds that swept down out of the North Atlantic and across the Outer Banks and over the great estuaries where the fishermen set their nets.

Mike has often told me that the  V-shaped frames that are typical of many of North Carolina’s other traditional work boats would not have stood up as well to those conditions. They were built for more sheltered waters.

When he and I discuss shad boats, Mike often describes different aspects of their design and construction that made them especially well suited to the waters around Roanoke Island and the job for which they were built.

In today’s post I want to look at one of those features: the use of natural juniper root knees for framing in the boat’s hull.

The root knee is the section of the tree at the bottom of the trunk where its roots begin to extend outward.

As you can see in Earl’s drawing below, the root knee, when cut out of a juniper stump, has a natural curvature.

A single knee ran from the top of the stump down to the ground and then curved outward into a root.  When cut out, the knee remained in one piece and imparted a strength to a boat’s hull that could not be found with traditional joinery techniques.

Finding juniper knees of the desired curvature was not an easy job, however. When Earl interviewed shad boat builders, several told him that finding the right sized knees was among the most difficult and time-consuming tasks in building a shad boat.

Juniper trees typically grow in moist, swampy soils, so shad boat builders had to go into one of the local wetlands to find their root knees.

When talking with Earl and Mike, a veteran shad boat builder named Wynne Dough remembered that he, his father and his brothers went into the swamps along Mill Tail Creek, on the mainland of Dare County, in search of their juniper knees.

That was usually in spring or early summer, after the water had warmed a little and before the swamps got too buggy and the snakes woke up.

The waters around Mill Tail Creek are often very narrow passages through swamp forest but now and then open up into broad lakes. Courtesy, Thirdeyemom

Mr. Dough recalled that they carried a variety of tools into the swamp, including a six-foot crosscut saw, an axe, an adz, wedges and a maul. They referred to the root knees as “spurs” before they were taken to a sawmill and dressed.

Sometimes shad boat builders looked for days for juniper stumps that would produce knees with the right size and curvature for the boat they intended to build.

That was no easy task when, as was often the case, they had to trod through waist deep water in search of the stumps.

At most they could cut two root knees suitable for shad boat frames from a juniper stump.

In Earl’s interviews, shad boat builders referred to three locales as the sources of root knees for their frames, keels and planking. 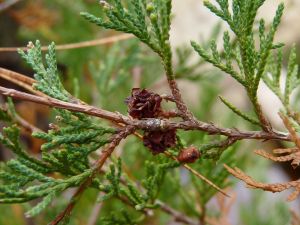 One was the Cow Island Flats, on the backside of Bodie Island, just to the east of Roanoke Island.

At the Cow Island Flats, they dug old juniper stumps out of a “ghost forest,” a maritime forest that had either been killed by saltwater intrusion (as sometimes happened during storm floods) or by migrating sand dunes, pushed by the prevailing winds, that had rolled over and smothered them sometime in the past.

The second locale was Callaghan’s Swamp, south of Manns Harbor, a village on the mainland of Dare County, just on the other side of Croatan Sound from Roanoke Island. 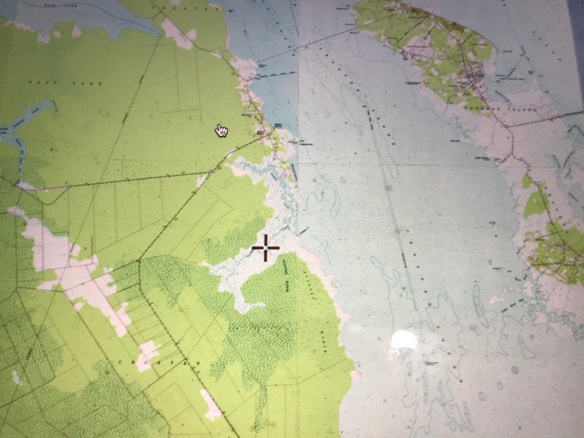 The cross on this USGS topo map marks Callaghan’s Creek, on the mainland of Dare County, N.C. The shaded area around the creek is Callaghan’s Swamp, an important source of juniper for shad boat builders in the late 19th and early 20th centuries. To the east, we can see Croatan Sound and Roanoke Island.

The third locale was the swamp forests along Mill Tail Creek, a deep, but narrow and very lovely stream that flows into the Alligator River, in the heart of mainland Dare County.

USGS topo map featuring the western end of Mill Tail Creek as it flows into the Alligator River in Dare County, N.C. The mottled area–in this case, all of the terrestrial area shown– indicates wetlands. Mill Tail Creek was probably the single most important source of juniper (Atlantic white cedar) for boat building anywhere on the NC coast.

The Doughs went to Mill Tail Creek to find their root knees, and so did many of the other shad boat builders that Earl interviewed.

In those days, a trek into the swamps was not unusual, at least not on the North Carolina coast. The lives of maritime people did not unfold only in seaports and fishing villages, and on open water and distant shores, but for the men at least, also in great swamps.

There they’d go to get the juniper and cypress wood necessary to build boats, but also for other practical things– black gum roots to make net floats, for instance, and cypress to make the things that they meant to stand up to time and weather, everything from roof shingles to grave markers.

“IT WAS A HARD LIFE, I’M TELLING YOU”

I don’t know if Nixon worked out of a shad boat. However, whether he did or not, his recollections give us at least a glimpse at the job and the conditions for which shad boats were designed and built.

Originally from Engelhard, in Hyde County, Nixon moved to Stumpy Point and started shad fishing in 1886.

“We’d get out about daybreak to go to our nets and if luck was with us we’d get back before nightfall,” he remembered.

“But there were times when we struck a dead calm and had to use our `wooden sails’ [oars] and we’d do pretty well if we got in at 9 or 10 o’clock at night.”

Nixon boasted that he rarely missed a day fishing. He couldn’t afford to. Even if he had to weather frigid winds, ice in the shallows and washing machine seas, he headed out to check his nets.

“Sometimes a stiff wind would blow out of the north,” he recalled. “We just had to let go our nets and scud with the wind until we ran inside a reef or into a cove where we could creep in out of the weather.

“I counted 17 boats scudding before such a wind one day and they were helpless until they got inside the reef off Kinnakeet, 40 miles away. It was a hard life, I’m telling you.”

Kinnakeet (now known as Avon) was located on Hatteras Island, one of North Carolina’s Outer Banks.

Nixon continued: “Many a time I have seen late snows and sleet after the opening of the [shad] season, when the spray would freeze on our sails and oars.

“When you’ve got a stand of nets, they’ve got to be looked after—gill nets especially,” Nixon said.  “A fish caught in a gill net strangles to death and washes out if left too long in the water. Its eyes lose their brightness. Its gills turn pale, and it don’t bring a good price.”