What touched me most deeply in Maury York’s remarkable new article on the history of school desegregation in Franklin County, N.C,. are the stories of the African American parents who first sought to send their children to previously all-white schools.

York’s article is called “`A State of Shock’: The Desegregation of the Public Schools in Franklin County, North Carolina, 1965-1968.” The article appears in the latest issue of the North Carolina Historical Review, which came in my mail today, and I highly recommend it. 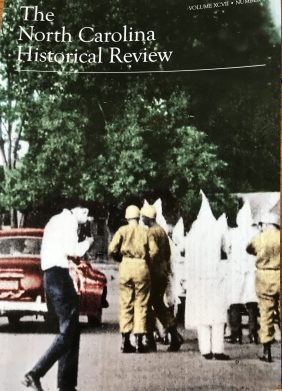 Maury York’s article appears in the latest issue of the North Carolina Historical Review. The journal has been published by the state’s Office of Archives and History since 1924.

It is a powerful story. In the spring of 1965, dozens of black students in Franklin County applied to transfer from all-black schools to all-white schools.

Eleven years earlier, the U.S. Supreme Court had ruled that separate schools for black and white children violated the U.S. Constitution. However, that group of students would have been the first to break the color barrier in Franklin County.

“What happened next rocked the county,” York writes.

On June 4, 1965, WYRN, a local radio station that had repeatedly editorialized against school desegregation, broadcast the names and addresses of the transfer applicants over the air at least three times.

Neither the radio station nor the newspaper explained why they published this information, but they did not need to: across eastern North Carolina, the Ku Klux Klan and other whites were terrorizing black children and their parents who supported school desegregation.

By listing the names of the students and their guardians, the radio station and The Frankln Times knowingly put the lives of those black children and their families in danger. It was an extraordinarily heinous thing to do.

Cross Burnings & Calls in the Night

In his article in the North Carolina Historical Review, Maury York carefully documents what happened next.

Drawing on interviews from an oral history project on school desegregation in Franklin County that he oversaw while he was director of the Tar River Center for History and Culture at Louisburg College, York first quotes an African American mother named Irene Arrington.

Mrs. Arrington and her daughter Norrine lived in Moulton, a rural community northeast of Louisburg.

“I had a lot of telephone calls, starting around suppertime and would last until 11 o’clock . . .. Some of them was telling me that something was going to happen to you, you are going to get killed.”

Norrine Arrington had applied for a transfer from the all-black Cedar Street School to the all-white Louisburg High School.

On June 14, 1965, a gunman, or gunmen, fired shots into the windows of Mrs. Arrington and her daughter’s home. The shooter, or shooters, also fired into a car parked at the house.

Around the same time, three men threatened the life of Rev. S. G. Dunston. Two of his and his wife’s foster children had applied to transfer to one of the county’s previously all-white schools.

He and his family received death threats, and an unknown person contaminated their drinking well with kerosene.

Many other black families also faced harassment and threats.

The Rev. Luther Coppedge was later the lead plaintiff in a federal class action lawsuit that led to the integration of Franklin County’s schools. Photo by Kelvin Spragley. Courtesy, The Franklin Times

The Rev. Luther and Christine Coppedge, for instance, were farmers in Justice, a rural community in eastern Franklin County.

After WYRN and The Franklin Times announced their son Harold’s name as a transfer applicant, the family received as many as 15 threatening calls a night. A cross was burned near the house and a firebomb set off.

Vandals also targeted the family, placing nails in their driveway and doing other petty mischief.

That summer another farm mother, Margaret Crudup, in Youngsville, received this letter. Its grammar and spelling were not perfect, but its meaning was unmistakable:

“Dear Mr. and Mrs. Cr[u]dup we hear that you are sending a child to Youngsville School. Well we are giving you 30 days to get out of Franklin County. Pay your land[lord] what you owe him if any. Leave your crop. We are not going to warne you agane. We will start in your family, and will start with you to killing.”

Even some white citizens paid a price for supporting school desegregation in Franklin County.

For instance, in his article, York cites the cases of two local white ministers, Robert Latham and Frank Wood.

According to court testimony in 1967, their churches fired Latham, a Baptist missionary, and Rev. Wood, the pastor of Centerville Baptist Church, for expressing their support for white and black children going to school together.

Those were of course different times. Nobody was video recording these incidents of violence and intimidation. When they were attacked, the black families also had far fewer resources available for help. Those families and their neighbors generally dealt with these kinds of threats on their own.

Some victims of white intimidation reached out to the NAACP and other national civil rights groups. Most looked to their own families and their own communities for support and protection.

Rarely did newspapers or local TV or radio stations report on KKK cross burnings, fire bombings or shootings. They almost never covered incidents of petty vandalism or the threatening phone calls. Local police seldom investigated any of these acts of violence or intimidation.

As a consequence, black communities took steps to protect themselves. In Franklin County, for example, according to York’s article, a group of eight black parents organized armed patrols to protect their families and homes.

I’m sure other black families did likewise.

As I thought about this story today, here 3 weeks after George Floyd’s murder, I couldn’t help thinking about how sudden and unexpectedly those Franklin County families’ lives changed, when WYRN and The Franklin Times divulged their names and addresses.

Of course I had to think of George Floyd, too, and how quickly his life was upturned, and then taken from him. 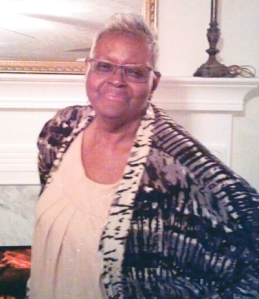 Mabel Kingsbury was the first black student to graduate from previously all-white Franklinton High School. As she got ready for her class’s 50th reunion two years ago, The Franklin Times quoted her as saying, “”I was determined that no one was going to turn me around.” Photo courtesy, The Franklin Times

For the black families in Franklin County, as for George Floyd and so many others, everything changed in just a few seconds. In a single moment, life’s fragility was exposed, the knife’s edge on which they lived their lives in the Jim Crow South revealed.

The next thing they knew, as Maury York has shown us so well, they were in a life and death struggle for survival and had been thrust into the tumult of the struggle for racial justice in America.