This is chapter 12 of Shark Hunter: Russell J. Coles at Cape Lookout.

The first mention of the First World War at Cape Lookout in Russell Coles’ diary is dated July 28, 1916. On that day, Coles wrote that he had risen before first light and had taken his boat out onto Lookout Shoals and was “looking for the German submarine” by sunrise.

“The German submarine” was the Bremen, which was an unarmed submarine that was built to carry wartime supplies through the British Navy’s blockade of German shipping.

At the time, the U.S. was still not at war with Germany and German authorities hoped that the Bremen and its sister ship, the Deutschland, could carry cargos mainly between the U.S. and Germany.

The German submarine Deutschland ca. 1916. From Journal of the United States Artillery vol. 46 (1916)

“For two days every boat coming out from Morehead City has brought reports of telegrams received there that the . . . Bremen was to run in here and boats with pilots keep constantly on the watch.”

Later that afternoon, he continued, “the cry of the submarine arose and all scrambled to high places and what I saw through my powerful glasses may, or may not have been a peep at the great world war.”

In fact, a storm of wartime rumors, propaganda and misinformation was sweeping across the East Coast at that time and in this case the rumors of the Bremen’s arrival were groundless.

Coles spied a ship in the distance, but it had nothing to do with the Bremen.

In reality, the Bremen had not even left Germany on its maiden voyage yet. The other German freight submarine, the Deutschland, on the other hand, had already crossed the Atlantic, but it was anchored in Baltimore on the 28th of July, not bound for Cape Lookout.

The Sinking of the Mirlo

The next time that Coles wrote about naval action at Cape Lookout, it was not just a rumor.

Two summers later, in the summer of 1918, after the U.S. had declared war on Germany, Coles wrote from his yacht at Cape Lookout:

“Well, I am within sound of the guns of war and the whole air is just screaming with war while shipping of all kinds is rushing to harbor. Day before yesterday, an airplane was hunting the water over close flying near to very near the Mary G. Yesterday I saw 3 submarine chasers entering this harbor and when about to anchor very near me they suddenly caught a wireless and instantly from one to the other signals flashed and in a smother of foam they dashed out to sea then the occasional deep roar of a cannon could be heard….” 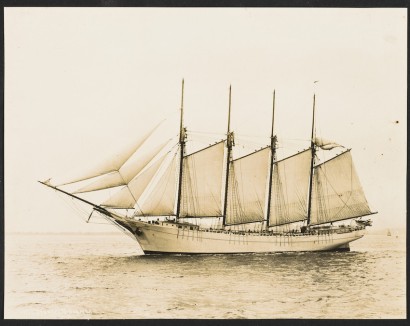 In an undated note that my daughter Vera and I found at Coles Hill (his family’s estate in Virginia), Coles described what happened on that day, probably in early August 1918, when events grew so frantic at Cape Lookout:

“I ran up to the coast guard station and by phone they reported that a huge transport and a big tanker had rushed pass there at (Hatteras) bound South in a battle with one or more submarines, one of which was on the surface firing on the ships and they firing in reply.”

“Next came the report by phone from Core Banks Station 20 miles North of here . . . that the battle was going on in full view only ½ mile off shore. Next phone [call] from Core Banks [indicated the air just filled with airplanes and the sea with submarines chasers, that the transport appeared damaged, as she had a list to port and that her and the tank ship were headed North.

“Next phone from Hatteras [reported] that the battle was over but that 6 or 8 big ships had run in close to the beach with chasers and airplanes on guard.”

If that’s the case, the date was August 16, 1918, and he was getting reports of the German submarine U-117. On that day, the submarine was laying mines just off of Wimble Shoals, north of Cape Hatteras, when its crew got the 6,978-ton British steamer Mirlo in their sights.

The U-117 quickly torpedoed the British ship. Nine of the Mirlo’s crew died in the attack. Led by Warrant Officer John Allen Midgett, Jr., coastguardsmen from the Chicamacomico station brought the rest of the crew to safety.

Rumors of German submarines and saboteurs swirled around Russell Coles at Cape Lookout. News of ship sinking and naval battles spread quickly from the Coast Guard station to him and the little community of fishermen and other islanders around the lighthouse.

On the mainland, Coles also saw signs of the war. When he visited Morehead City, he rubbed shoulders with local army recruits headed for the battlefields of Europe (including my grandfather, David Bell), and he observed the hustle and bustle of the shipyard workers at the North Carolina Shipbuilding Company. 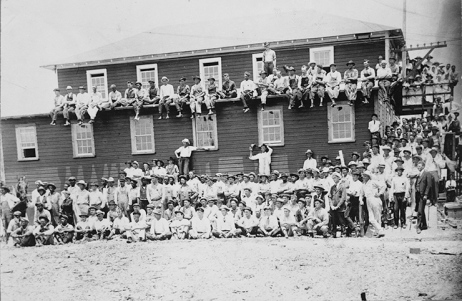 Food Will Win the War

As I mentioned in my last post, Russell Coles and Teddy Roosevelt had proposed organizing a company of old adventurers like themselves to fight in the war, though both were in their mid-50s and Roosevelt privately admitted that he had “no physical prowess” remaining.

When Pres. Wilson did not take their proposal seriously, Coles looked for another way to contribute to the war effort.  He thought he found it in advocating for the consumption of marine fish species that were not traditionally eaten as a way to conserve meat and other foodstuffs so that they could be sent to the fighting men and women in Europe.

At the time, the U.S. Food Administration promoted special days like “Meatless Tuesdays” and plastered streets with posters urging Americans to reduce the amounts of meat, wheat, fats and sugar in their diets.

Much of the U.S. Food Administration’s propaganda also focused on promoting alternative foods for consumption on the home front– Coles believed that fish should have been a central part of that effort.

His interest in the eating of non-traditional fish did not start with the First World War, though.  In truth, Coles had long been an unusually open-minded cook, and he had showed an extraordinarily adventurous taste in seafood for years.

On one hand, his crew of fishermen had taught him to appreciate the local ways of cooking. Like them, he became fond of salt mullet roe, brothy clam chowders with cornmeal dumplings, stewed sea turtles and many kinds of shellfish.

Russell Coles and a pair of local fishermen with a loggerhead turtle (Caretta caretta), Cape Lookout, N.C., ca. 1908. Female loggerhead turtles lay their eggs on the beaches of the NC coast. The turtles and their eggs are now the focus of widespread conservation efforts. Photo courtesy, North Carolina Maritime Museum

But Coles didn’t stop there. Almost from his earliest days at Cape Lookout, he had tested the culinary qualities of what he rather euphemistically called “un-used marine products.”

For him that was a rather large category of marine and terrestrial animals.

In a memo dated August 1, 1918, that Vera and I found at Coles Hill, Coles recounted:

“In 1904 I began to blaze a path through the trackless wilderness of prejudice, surrounding the articles listed as good for food. My first experiment in 1904 was to eat a two-pound steak of alligator; it was good. My crew protested against having to eat food prepared in the same vessel in which it was cooked. Since then I have kept for my personal use cooking utensils especially for these food experiments….”

In the memo, he wrote that, if he ever married and had a home of his own, “I will have a dining room with its walls covered with the pictures of strange creatures which I have eaten and found good for food.”

It would have needed to be a large room.

“There would be crocodiles and many strange and curious reptiles, which, crawl, swim or burrow in the ground. Of sharks there would be full 20 species, from the delicious little smooth dogfish to the terrible tiger shark and great white shark, which is the true man-eater.“

Smooth dogfish (Mustelus canis) are common on the North Carolina coast. Typically about 4 ft. in length at maturity, they have been fished rather intensively in recent decades in the waters between Massachusetts and North Carolina. Courtesy, NOAA

He was just getting started:

“The number of rays which I have eaten is nearly as great ranging from the dainty toothsome little butterfly ray to the giant devil fish and nearly all I have found delicious beyond compare, with many of the so called best food fishes and the pictures of these rays would make wonderful wall decorations.”

He had grown even more open-minded in his eating habits beginning in the summer of 1917, after he realized that he and Teddy Roosevelt could not contribute to the war effort by fighting in Europe.

“Being fifty one years old and weighting two hundred and seventy-five pounds, I was thus barred from actual fighting on land or water and being unwilling that others should do my fighting without help from me, I turned my activities to food conservation . . ..”

He informed the president that he had made “almost daily tests of the food and other values of Sharks, Rays, and other sea products which are not now utilized” while he was at Cape Lookout the previous summer.

He had then discussed the possibility of a national policy of using non-traditional seafoods during war-time with Roosevelt, who soon held a lunch for the press and influential political figures at the American Museum of Natural History in order to build support for Coles’ idea.

By the summer of 1918, Coles seems to have been willing to eat just about anything.  For instance, he wrote this line in a May 16, 1918 letter to his sister-in-law Eliza (to whom he confessed everything):

“Had skate [steaks] and porpoise milk for breakfast and [sea] turtle for dinner.“

“… all excellent, except the porpoise milk was not extra good. A little too slimy, although very rich and creamy with fairly good flavor, though the flavor was a little peculiar.”

Now rare and endangered, sea turtles were a common food in the fishing communities on that part of the North Carolina coast at that time.  Skates were rarely eaten, though fishermen often used them for bait.

Porpoise milk—probably bottlenose dolphin milk, in reality— was off the charts and was definitely not part of the local diet. On the other hand, local watermen had long hunted bottlenose dolphins in order to obtain their oil to light their lamps and lubricate their tools.

Though he received a good deal of favorable publicity for his efforts and was praised for his patriotism, none of Coles’ rather creative ideas on wartime food supply really moved forward. By the time the U.S. Food Administration was ready to embrace some of them, the war was over.

The Allies and Germany ended the war with an armistice on November 18, 1918. By then Coles already had a new obsession—a shark factory.

One thought on “Cape Lookout’s War”