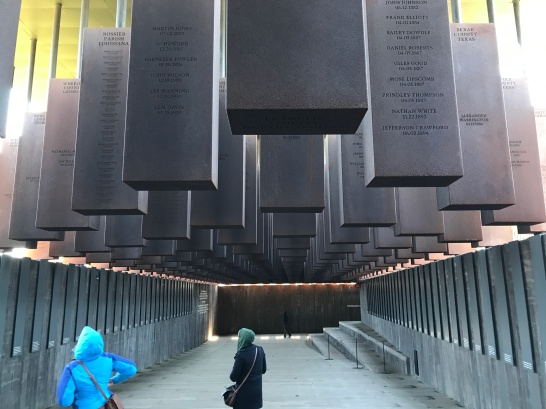 The north side of the National Memorial for Peace and Justice, Montgomery, Alabama. Each monument lists lynchings that occurred in a single county in the United States. Photo by David Cecelski

My daughter and I recently visited the National Memorial for Peace and Justice in Montgomery, Alabama. It is the nation’s first memorial dedicated to the victims of racial terror and lynching.

The Memorial enshrines the names of more than 4,400 African Americans who were lynched in the United States between 1877 and 1950. They are listed on hundreds of monuments, one for every county in the U.S. where a lynching is known to have occurred.

As we walked among the monuments, I kept thinking about a story that an African American man named Joe Lewis once told me. That was nearly 20 years ago, and Mr. Lewis was 81 years old at the time. The story was about a lynching near his childhood home in Franklin County, North Carolina.

Mr. Lewis had been born and raised in Royal, a little rural community made up largely of African American sharecroppers and tenant farmers.

One of the names listed on the monument in the foreground is that of Powell Green. A white mob lynched Green near Franklinton, N.C., on December 27, 1919. A white mob tied him to the back of a car, dragged him half a mile, hung him and riddled with his body with bullets. Photo by David Cecelski

We talked mostly about a single day in 1947. Up to that time, whites had not allowed African Americans to vote in Royal for half a century. But on that day, he and a group of his closest friends decided that the time had come to change that.

They were all combat veterans, Mr. Lewis told me. They had all been involved in some of World War II’s bloodiest fighting.

Two or three of his group had fought in Germany. He and one other friend had fought in the Philippines. “I had been in the jungle,” he told me. “Hand to hand and face-to-face stuff.”

After the war, when they returned home, he and his friends discovered that their military service still did not give them the right to vote, at least according to white leaders in Royal. But after fighting for democracy overseas, Mr. Lewis and the community’s other black veterans did not take no for an answer.

The Memorial’s monument for Wilson County, N.C. You can find a compelling account of one of the lynchings, that of J. C. Farmer, a 19-yr-old veteran of WW2, at one of my favorite blogs, Black Wide-Awake. Photo by David Cecelski

“In the Army when the going got rough, you just get where it doesn’t bother you,” Mr. Lewis told me.

“Same thing happened about this case. We didn’t care what happened. We just made up our mind that we were going to register [to vote] and we went on and did it. We were not afraid.”

I asked Mr. Mr. Lewis if he remembered any lynchings, cross burnings or other instances of racial terrorism when he was young.

I thought that information might help me to understand better the environment in which he and his friends lived in those days.

Mr. Lewis just looked at me for a few seconds and did not say anything. Then he shook his head and laughed a little, as if he thought that I must not know very much about North Carolina history if I had to ask that question.

“There were a whole lot of hangings, good gracious,” he finally said, in a kind of half whisper.

Then he told me about one of them.

“There was one right here off of 98,” he recalled. He meant State Highway 98 that runs between Durham and Spring Hope.

I found Peter Bazemore’s name on the monument for Bertie County, N.C. He was only 16 years old when a white mob lynched him in 1918. The mob’s leaders said that he had raped a white woman. Authorities later discovered that a white man dressed in blackface was the real culprit. Photo by David Cecelski

Mr. Lewis then said something that haunts me still.

“My cousin, he carried his boys over there, so they would always be afraid of white people. Took them there as a lesson. Thought he was going to keep them out of trouble.”

He shook his head again at the thought of those young children seeing that body, probably already mutilated, hanging from that tree by 98. He had to know, as I did, that at many lynchings white people took turns shooting into the body while it hung from the tree.

He told me that his cousin never did register to vote out of fear for what white people would do to him and his family.

In 1919, a white mob hungJohn Daniels from the bridge across the New River in Jacksonville, N.C. Photo by David Cecelski

I knew what he was telling me: not everybody was like him and his fellow army veterans. And if I wanted to dig down deep and really understand North Carolina’s history, and not just play around the edges of things, I needed to know that we were standing in a place where once upon a time a black father might take his children to a lynching out of love, which I thought was just about the most horrible thing I had ever heard.

You can find my story “Joe Lewis: `We Were Not Afraid” here. It originally appeared in my “Listening to History” series in the Raleigh News & Observer in 2003.

The National Memorial for Peace and Justice in Montgomery, Alabama, is one of the most thoughtful and powerful commemorations of American history that I have ever visited.

The Memorial is a project of the Equal Justice Initiative (EJI), a non-profit organization dedicated to fighting mass incarceration and to protecting the legal rights of the innocent and abused in America’s prisons.

You can find EJI’s original report, Lynching in America: Confronting the Legacy of Racial Terror, here.

You can learn more about EJI’s Legacy Museum: From Enslavement to Mass Incarceration, which is also in Montgomery, here. And you can find out how to get involved in EJI’s Community Remembrance Project in your community here.

7 thoughts on “Where They Remember”