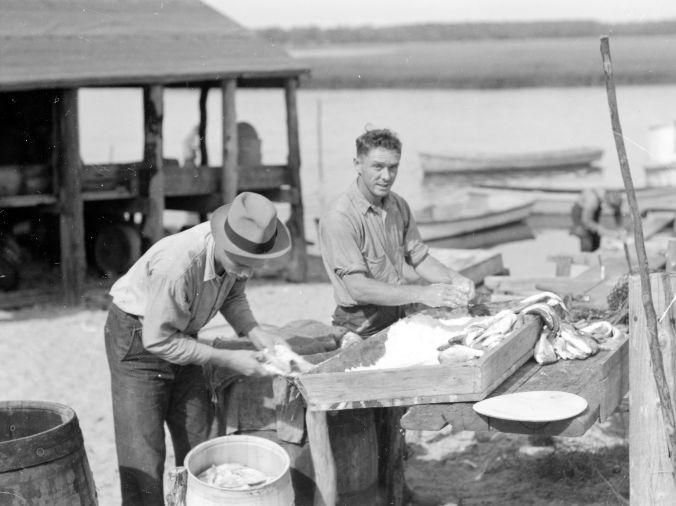 Two fishermen, brothers Carroll Lawrence and Lloyd Lawrence, salting spots on the sound side of the mullet camp at Brown’s Island.

Carroll is coating the fish in salt in the big tray, while Lloyd is packing the fish in kegs. Once packed in salt, the fish will keep throughout the winter and well beyond.

In the background, in front of the skiffs, a third man is leaning over and likely cleaning spots next to the shore to get them ready for salting. 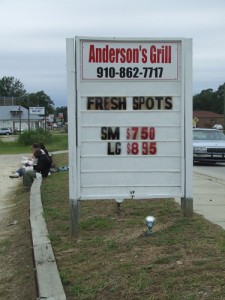 Anderson’s Grill, Tar Heel (Bladen County), N.C. Signs like this pop up all over SE N.C. this time of year. Photo by David Cecelski

In that part of North Carolina, spot—a small, very common fish in local sounds and coastal waters—were considered an autumnal delicacy, and remain so today. At the camp, the men fished for spots with gill nets in the sound when the mullet weren’t running or when the weather grew too rough for mullet fishing in the ocean.

The fishermen had no market for the spot, but they ate a steady diet of them at the camp and carried kegs full of the salted fish home to their families in Otway.

For most of the 19th century, the only large commercial fisheries on the North Carolina coast dealt in salt fish. With no major city nearby to provide a market for their fresh catches, salting was the only practical method for preserving fish for a sufficient length of time to transport them to distant points.

Markets for fresh fish first appeared in the 1870s, with the advent of ice making machinery and refrigeration, as well as with the coming of railroads and steam-powered vessels capable of carrying the fish quickly into the state’s interior and to northern cities. The fresh fish trade grew further in the 20th century, but the salt mullet trade was still important well after the Second World War.

In 1938, when this photograph was taken, a barrel or two of salt mullet could still be found in winter pantries throughout the N.C. coast. Barrels of salt mullet were likewise fixtures in general stores across eastern N.C., as common as jars of pickled eggs and pig’s feet on the counters of those stores.

For many generations, cash-poor fishermen had also traded barrels of salt mullet with farmers up coastal rivers for corn, coffee, and other staples.

On the Sunday that Charles Farrell visited the Brown’s Island camp, the fishermen had taken the day off from mullet fishing, but were catching spots in the sound for their own tables.

Behind the Lawrence brothers, you can see the open shed where they stored barrels of salt mullet until shipment. That was done apparently through an arrangement between Oliver W. Lewis, the leading merchant in Otway, and a commission agent in New York City.

Odds are, Oliver W. Lewis also provided the fishermen with the credit necessary to purchase their boats, gear and provisions. Like anything else, a mullet fishery required a financial investment, even if a modest one, and few fishermen had any extra cash in the 1930s. Inevitably they re-paid the loan at the end of the fishing season in salt mullet.