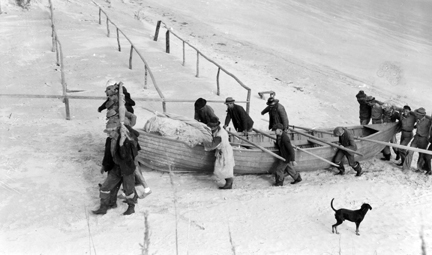 The Gillikins and Lawrences carrying their surfboat, loaded with the mullet seine, to its resting place above the high tide line on the ocean side of Brown’s Island. Two rows of fishermen lifted the boat holding strong beams across their shoulders fore and aft, secured to the boat by a pair of heavy lines that ran stem to stern.

Another half dozen men held long oars secured to the boat at the thwarts, but could not have been bearing much weight on them.

Bedford Lawrence holds one end of an oar on the far side of the boat, while his grandson, Tildon Lawrence, holds the opposite end of the oar in front of him. Net spreads stand just beyond them, a pooch in front. They seem to be two men short, judging by the unmanned oar. This was a demonstration, presumably done for the photographer Charles Farrell’s benefit.

Norwood Frost, Henry Frost and Norwood’s son Rodney, of Salter Path, N.C., are members of the last two crews of mullet fishermen in North Carolina that still fish fundamentally the same way as the Gillikins and Lawrences did at Brown’s Island in the 1930s. Norwood, still the captain of one of the crews, was 80 years old when I spent a morning with him a couple years ago. His brother was 70.

When they looked at this photograph with me, they described how the fishermen handled the boat and seine in the water. They based their observations on a lifetime of fishing for mullets on Bogue Banks, which is a little east of Brown’s Island, and on what their grandfather, who was also captain of a local mullet crew, told them about mullet fishing in his younger days.

When Henry and Norwood Frost were young, Bogue Banks was home to 10 to 12 mullet camps.

On a mullet fishing day, the Frosts told me, the fishermen carried their boat down the beach and into the surf for the first haul of the day before sunrise. As they entered the surf, the boat’s crew jumped aboard, while other hands strode into the water as deep as they could go to hold her steady in the breakers.

Standing on the ocean’s edge, another fisherman held fast to a five or six-foot-long post called a “suds staff,” to which was attached one end of the seine.

The suds staff kept that end of the seine fixed on shore, while the boatmen rowed through the surf and the net man, in the rear of the boat, gradually let out the seine in an arc around the school of mullet—“striking mullet,” it was called.

According to the Frosts, the fishermen then rowed ashore and secured the other end of the seine to a second suds staff, so that the seine made something of a half-circle in the ocean, with both ends rooted on the beach.

After dragging the boat ashore, every fisherman in the camp then took hold of one of the two warps, which were also attached by bridles to the suds staffs. They proceeded to haul the seine onto the beach by hand. It was heavy work with a big catch.

For decades, the mullet fishermen at Salter Path have used tractors to haul in their seines.

Now hemmed in by beach house owners, fishing pier operators and sunbathing tourists, many of whom consider them to be infringing on their property rights and leisure time, the Frosts and their crews have not given up mullet fishing on the ocean beaches at Bogue Banks. They still take to the beach every autumn in pursuit of jumpin’ mullet, and it’s a sight to see.