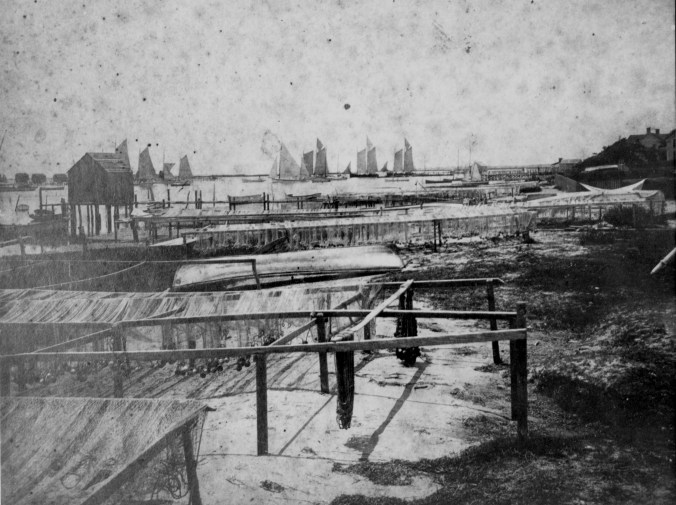 By Michael B. Alford and David Cecelski

Waterfront at Beaufort, N.C., circa 1890-1900. Though dappled with age spots, this photograph captures well both the extent to which the harbor lay at the old town’s heart and the number and diversity of sailing craft that were typical of the port in the last days of the Age of Sail.

Nearly 20 sailing vessels can be seen in a single glance westward down Taylors Creek and toward the inlet on a mid-day low tide.

In the foreground, menhaden fishermen’s purse seines dry on net spreads, their floats and warps dangling low to the shore. Three or four net reels, also for drying purse seines, stand on pilings in the distance, on the far left side of the horizon. They’re perched on Bird Shoal, a long tidal flat on the south side of Taylors Creek.

Several docks reach into the water. A net house stands at the end of one of them. On the north side of the creek, a pretty spritsail skiff has her sails up. Ten or more other skiffs lay about the harbor.

This is the first in an occasional series of posts that we are simply calling “Alford and Cecelski: About Boats.” In this series, Mike Alford and I will explore historical photographs of the North Carolina coast that feature scenes of boats, boatbuilding and maritime life. The former curator of traditional workboats at the N.C. Maritime Museum, Mike has been studying the state’s traditional workboats for nearly half a century. I learn new and important things every time I talk with him, and I’m very excited that we have this chance to do a little writing together.

Skiffs were a common mode of getting about day-to-day in the local waters when roads were primitive, and some just pathways. On any given day, a local man or woman, or often a young boy or girl, would have used a skiff to collect a bushel of oysters, to go to church or to visit a friend.

Beyond the skiffs, at least half a dozen sharpies lay at anchor, their noses pointed into the wind, one with full sails set. Another is perhaps in the process of raising its main.

Farther down the harbor are three large schooner-rigged vessels moored in a group. They look a moment away from weighing anchor and heading all together to the oyster rocks or fishing grounds.

One of the sharpies, yawl-rigged with a short bowsprit and jib, is almost certainly a pleasure craft. The others are fishing or oyster boats.

For all the grace and glory of the sharpies, the star of this show, at least to us, is the rather inauspicious looking little boat turned upside down on the sand in the near foreground.

At first glance, one might mistake the upturned little boat for a lightly built style of craft that was popular in the north at that time, or perhaps a fancy rowboat or some other kind of livery boat or taxi. However, closer examination reveals that she’s not a plank-built boat at all.

Roughly 15-16 feet long, she is an example of a unique style of dugout log boat, known colloquially as a kunner, which was a ubiquitous small, all-purpose workboat found on local waters from the late 1600s until the early 1900s.

“The boat we had before skiffs,” answered Neal Jones, of Marshallberg, when asked, “what’s a kunner?” almost 50 years ago.

We often see references to kunners in historical documents, but just what a kunner looked like and how it was built remained a puzzle to us in the early part of our careers. 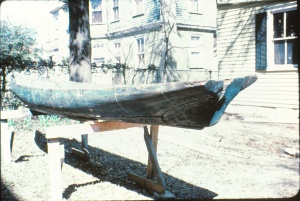 Kunner, dated by local lore to the 1820s, at the New Hanover County Museum (now the Cape Fear Museum), Wilmington, N.C. One of her later owners had named her the Doodle. Photo by Mike Alford

Then, in the early 1980s, one of us (Mike), in his capacity as curator at the N.C. Maritime Museum, had an opportunity to examine several small boats at what was then named the New Hanover County Museum, in Wilmington, N.C. One of the boats, a small dugout log boat, immediately caught his attention and aroused his interest.

Its construction was unlike any other log boat he had seen, but it did fit a description of boats observed by an English colonist named John Lawson when he was traveling through the Carolinas in the early 1700s. Oral history accounts dated the boat to around 1820. 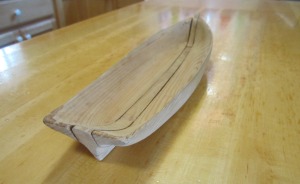 Most importantly, though, that surviving boat enabled one of us (Mike, again) to interpret the little boat in this photograph. Mike made a small model to illustrate the construction.

An older fisherman, an occasional visitor at the maritime museum, saw it and volunteered “nice model of a kunner.” Mike showed it to a couple of other old timers. They nodded their heads approvingly.

In subsequent years, he has identified boats in other photographs to be kunners.

In addition, he and others have identified the remains of a small number of kunners. Some can now be found in museums.

One is in the historic watercraft collection at the N.C. Maritime Museum in Beaufort, N.C. Another, as we have already noted, is at the Cape Fear Museum in Wilmington, N.C. (formerly the New Hanover County Museum). A third rests at the Charleston Museum in Charleston, S.C. 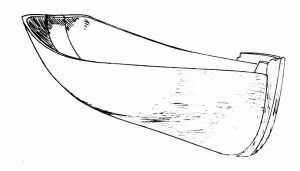 Drawing of the kunner Doodle, bow view, by Mike Alford

Built out of cypress or juniper, a kunner was uniquely constructed from a log that had been dug out and split into two halves and a wooden keel piece that bound the left and right shells together. For this reason we call it a split log canoe, or boat.

The end of the keel piece that we can see on this boat’s stern (in our ca. 1900 photograph above) looks much darker than the boat’s hull, so you might not notice it at first. Of course, because of its log construction, no signs of planking are visible on the hull. 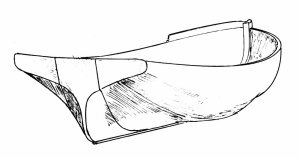 Drawing of the kunner Doodle, stern view, by Mike Alford

The boat’s centerboard, also darker, protrudes upward from the hull, so we know that she’s a sailing kunner; some were rowed or poled.

As a sailing boat, she would have also had a rudder, though it’s not attached to her transom while she rests on the beach. It was common to unship the rudder when not in use.

Kunners and their larger cousins, periaugers (also called pettiaugers or several other varieties of that spelling.), served as indispensible watercraft on Carolina waters for 2 centuries.

From the late 1600s to the Civil War, no workboat was more important on North Carolina’s sounds and other inland waters.

Constructed at little investment, reliant on the local abundance of old-growth bald cypress and built in a fashion that did not require a shipyard or a master boat builder’s skills, they were highly functional craft and used widely for fishing, transport and travel. 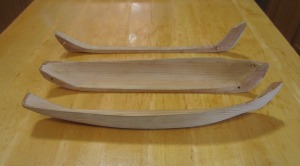 Another view of Mike’s kunner model, this time disassembled, highlighting the 2 shells and the keel piece. Mike most fully laid out his theory on the French roots of this boatbuilding technique in “Origins of the Carolina Split-dugout Canoes,” International Journal of Nautical Archaeology 21, no. 3 (August 1992), 191-203.  Photo by Mike Alford

Some periaugers even made coastwise passages to the West Indies.

One cannot rule out other cultural influences, but strong historical evidence points to the split-log design arriving in the Carolinas with French Huguenot colonists, influenced by the Basque in southwestern France, that settled between Charleston, S.C. and the Albemarle Sound in N.C. in the late 17th and early 18th centuries.

Lawson visited French Huguenot colonists on the Santee River in South Carolina in 1700.

In his New Voyage to Carolina, he wrote: “[We saw] vast Ciprus-Trees, of which the French make their Canoes…. After the Tree is moulded and dug, they saw them in two Pieces and so put a Plank between….”

He continued: “…Pereaugers and Canoes are scooped and made, which sort of Vessels are chiefly to pass over Rivers, Creeks, and Bays…. Some… are of one entire Piece of Timber. Others that are split down the Bottom, and a piece added thereto….”

The split-log boats may sound primitive, but they were hardy and eminently practical boats well suited to North Carolina’s sounds. In later years, builders sometimes added decks and sophisticated interior planking, so that from a distance one would never have recognized them as log boats.

Needless to say, bald cypress trees of that size have not been seen on the North Carolina coast in some time.

By the time that this photograph was taken, kunners had become a bit of a relic from another age. Clearly, they had not disappeared entirely, though. Plank-built skiffs had largely supplanted them, but they could still be found in small numbers into the 1930s.

4 thoughts on “The Boat We Had Before Skiffs”