Last night I had Greek shortbread cookies called kourambiethes at the Annual Holiday Cafe and Bazaar at Holy Trinity Greek Orthodox Church in Raleigh. The sugar-dusted butter cookies are a Christmas rite in Greek homes, and the ones last night immediately brought to mind the first time that I had them.

That was more than a decade ago at the home of Pota Vallas, who lived next door to Holy Trinity. At that time, Pota was 92 years old, but still radiantly beautiful and vibrant.

When I visited her, she was still one of the city’s premier interior decorators, though she had just sold her landmark shop on Hillsborough Street.

Every time that I was a guest at her home, Pota served homemade kourambiethes. We sipped tea, nibbled on cookies and talked about the history of the Greek community in Raleigh.

Pota learned to make kourambiethes in her native village, one of the oldest in Sparta.

“The landscape,” she confided, “was hilly, very hilly, and I loved the earth. The snow was on top of the mountains and you see the orange trees below, and on this side, olive and almond trees.”

The old village and its ancient churches and monasteries seemed so beautiful in her words.

“We had a whole hill that was honeybees, and the hives were painted blue and the roofs were made out of straw. They looked from a distance like a little village,” she told me.

And then she had said, “I know God fixed those mountains with His hands.”

More than a half million Greeks immigrated to the United States. between 1890 and 1924. Most headed to northern or western parts of the country. When Pota’s family arrived in Raleigh, only a handful of Greeks lived in the city. 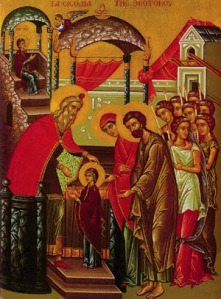 You can find my story on Pota Vallas and the history of Raleigh’s Greek community at the State Library’s NCpedia web site. It originally appeared in the Raleigh News & Observer. Pota was 92 years old when I interviewed her. The last time I saw her she was 105 and still flourishing.

She remembered 4 or 5 families coming together to found Holy Trinity in the 1930s. Their first priest came from a Greek monastery and lived on the second floor of her father’s shop, which was also where they worshiped. They were the state’s first Greek Orthodox congregation.

Decades later, Pota and her husband donated the land for the current Holy Trinity church building. It is a beautiful, modern edifice adorned with statues and stained glass images of saints. The sanctuary is filled with Old World relics.

From its beginnings, Holy Trinity attracted not only families who lived in Raleigh, but also Greek immigrants from small towns across eastern North Carolina who craved to hear their own language, to practice Greek Orthodoxy and to share dishes from their homeland like kourambiethes.

Kourambiethes are made with lots of butter and powdered sugar, rosewater, a little bourbon or cognac and crushed almonds. Pota’s were so good that they took my breath away.

They were not the only cookie that she made though. Other times, she served me finikia, a soft, honey-dipped cookie sprinkled with walnuts that, I have been told, has its origins in 14th century Phoenicia.

She also made koulourakia, a crisp cookie flavored with vanilla and orange or lemon juice. Another time, she sent me home with a tray of baklavas meh fistikia, the classic Greek pastry made with chopped pistachios, phyllo, cinnamons, cloves, nutmeg and a homemade syrup flavored with lemon and cinnamon.

At Holy Trinity’s holiday cafe and bazaar, I found all of those wonderful Greek cookies and pastries, and more. The Ladies Philoptochos Society, a women’s church auxiliary, takes orders for dessert trays in mid-November. Then they work for weeks to prepare the pastries for pick-up during the holiday bazaar, which is held annually on the first Thursday, Friday and Saturday of December. They usually have some extras available at the bazaar in case you forget to order ahead.

During the bazaar, the Ladies Philoptochos Society also serves a full Greek holiday meal as a fundraiser for local charities. When I was there, an 87-year old Greek immigrant called Artie, short for Artemus, was leading a bustling kitchen full of mostly older women who spoke sometimes in English, but more often in Greek. The kitchen ran like clockwork.

When I went last night, they were offering a choice of two wonderful dishes. One was a heaping plate of riganato, a baked chicken dish flavored exquisitely with lemon, garlic and oregano.

The other was pastitsio, a delectable casserole made with layers of elbow macaroni, parmesan and a spicy meat filling in a rich cream sauce. The entrees were accompanied by a spinach pita called spanikopita, a green bean dish called fasolia yiahni, a salad, roll and saragli, an incredibly good, crispy, rolled version of baklava.

Here is a recipe for kourambiethes that I found in The Grecian Plate, a marvelous cookbook compiled by the Hellenic Ladies Society at St. Barbara Greek Orthodox Church in Durham that was being sold at the bazaar at Holy Trinity:

Beat 1 lb. butter, clarified and chilled, with electric mixer until light and fluffy. Add ½ cup powdered sugar and beat well. Add 1 egg yolk and 1 oz. bourbon. Mix ½ cup blanched almonds, chopped, with 1 tbsp. flour and add to mixture. Add 6 cups sifted, all-purpose flour gradually; knead for 15 minutes or until dough is soft. Pat our small portion of dough about ½ inch thick; cut with cookie cutters into desired shapes—crescents, circles, fingers or balls. Place on ungreased baking sheets and bake at 350 degrees for 15 or 20 minutes, or until cookie is set, but not brown. Remove from oven, sprinkle with ½ oz. rosewater and place on brown paper that has been sprinkled with powdered sugar. Sprinkle cookies generously with sifted powdered sugar. Cool. Makes 30 large or 55-60 small cookies.

The holiday cafe and bazaar at Holy Trinity is always a wonderful part of the Christmas season. For me, though, the best part of the celebration was walking into the church and seeing Pota Vallas again. She was there every holiday season beyond her 100th year and she was always as beautiful as ever.

This is a slightly revised version of a piece I wrote several years ago for my food blog at the N.C. Folklife Institute’s website.  This year’s Holiday Cafe is Dec. 7 & 8 from 11 AM to 7:30 PM at Holy Trinity Greek Orthodox Church in Raleigh.

2 thoughts on “Kourambiethes at Holy Trinity”