The more I looked, the more I got the impression that the period from 1947 to 1953 was one of considerable labor unrest throughout the fishing industry on the North Carolina coast.

This is the last in a series of four posts about commercial fishermen’s efforts to organize labor unions and cooperatives on the North Carolina coast between 1947 and 1953.

First off, I tracked down the historical records of the International Fishermen and Allied Workers of America (IFAWA). The IFAWA was a national trade union that had been involved in fishermen’s labor organizing in other parts of the U.S. and Canada.

I found the documents in two places. The first was a collection of the CIO’s “Operation Dixie” papers that is preserved at Perkins Library at Duke University. Copies of the documents in that collection are also available on microfilm at Duke and at some other major libraries.

A 1947 issue of the IFAWA’s monthly newspaper. The cover story stresses the importance of the seafood industry for both workers and consumers. Courtesy, Henry Bridges Center for Labor Studies, University of Washington

I also found the IFAWA’s own historical records at the Bancroft Library at the University of California at Berkeley.

The IFAWA was an industrial trade union first established in the Pacific Northwest in the late 1930s. It grew to include thousands of fishermen, cannery workers and others working in the seafood industry. The union’s local chapters reached north through British Columbia all the way to Alaska, and they extended south into California.

The IFAWA clearly focused on West Coast fishermen, but I also discovered that the union had at least a small presence in Nova Scotia and here on the N.C. coast.

.To my surprise, the records at Duke indicated that commercial fishermen had organized seven IFAWA union locals on the North Carolina coast as early as 1947.

From Harkers Island to Swan Quarter

According to the historical documents, fishermen organized the UFAWA locals in some of the state’s quietest and most remote coastal villages.

They organized two union locals in villages Down East: one in Atlantic, on Nelson Bay, and the other at Harkers Island, across the North River from Beaufort. Between them, those locals boasted nearly 100 members.

I recognized many of the local leaders’ surnames. Most came from families that had lived Down East for generations, and before that on the Outer Banks or on the more southerly barrier islands– fishermen, whalers, boatbuilders, mariners, coast guardsmen, etc.

Fishermen started another IFAWA local far to the south, in Southport, at the mouth of the Cape Fear River.

The documents were revelatory, but they left a hundred questions unanswered: for instance, how did the fishermen first reach out to the IFAWA, when it was based almost exclusively on the West Coast?

Also, how many of the union members, if any, were shore workers– oyster shuckers, shrimp peelers or cannery workers? Were the women who shucked oysters, say, involved?  Also, how did race play into the union organizing? What part of the union activists were white, and what part were black? And how did they get along?

The answers to those questions all remain a mystery.

A small item in a list of local union officers caught my eye. The list indicated that the fishermen’s local at Lowland, a village on Goose Creek Island, had a secretary named Robert Carawan. A bunch of Carawans resided on that part of the coast, but Lowland isn’t far from Mesic and of course I couldn’t help but wonder if he was one of Guy Carawan’s cousins. (See my 1st and 2nd posts in this series for more on Carawan and his family.) 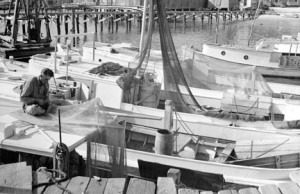 Shrimp trawlers at the docks and a fisherman mending net, Southport, N.C., late 1930s. In addition to the local shrimp fishermen, dozens of shrimping crews from Carteret County followed the shrimp to Southport every fall. Typically they lived on their boats and sold their catches to the local shrimp houses. Photo from the Charles A. Farrell Photographic Collection, State Archives of N.C.

I also learned a great deal from an article by maritime historian William Still, Jr.  His article appeared in what used to be a fabulous quarterly journal on American maritime history, the Peabody Museum’s The American Neptune, in 1987.

The founding director of East Carolina University’s maritime history program and the author of a splendid history of shipbuilding in N.C. that I believe will be published shortly, Dr. Still has long been a leading authority on North Carolina’s maritime history.

His article focused on the history of N.C.’s shrimping industry, but it’s the only historical work I’ve seen that deals seriously with labor issues and union organizing in any of the state’s fisheries, even if only briefly.

Shrimp houses in Southport, N.C., late 1930s. Shrimp packinghouses and canneries dominated the town’s waterfront until hurricane Hazel destroyed them in 1954. From the Charles A. Farrell Photograph Collection, State Archives of N.C.

According to Dr. Still, the IFAWA organized fishermen, shrimpers, shrimp peelers and other dockworkers in Southport in 1947.

At that time, before hurricane Hazel, Southport was said to be the biggest shrimp port in the world, in addition to being home to a sizable menhaden fleet.

In January 1947 the local newspaper, the Southport Pilot, reported that IFAWA Local 68 had 61 members. The paper noted that “a good number of them [were] negro shrimp boat operators.”

A later edition of the Southport Pilot reported that more than 100 local fishermen had joined the IFAWA, or roughly 75 percent of the town’s fishermen.

From Holden Beach to Broad Creek

In his article in the American Neptune, Dr. Still also noted that IFAWA fishermen tried to organize not just labor unions, but also cooperative packinghouses.

That was true especially a little to the south of Southport, in the vicinity of Holden Beach.

According to Dr. Still, Southport’s shrimpers had hoped to follow suit and organize their own cooperative packinghouse. Their goal, of course, was to break the power of the handful of packinghouses and wholesalers on the town’s waterfront to set the prices that they received for their shrimp.

In his history of the state’s shrimping industry, Dr. Still also discovered that, in that same time period, shrimpers in the Broad Creek-Swansboro area had gone out on strike.

That was apparently a wildcat strike, not one undertaken with the support of the IFAWA or any other national labor union.

Dr. Still’s article also reported that the state’s commercial fishermen met with representatives from other national labor unions during that same period after the Second World War.

In 1951, for instance, organizers from the International Longshoreman’s Association—which already had a presence on the docks in the state’s two ports— sought to assist fishermen to organize a labor union.

The ILA organizers apparently talked with shrimpers in Southport, and also with commercial fishermen on Pamlico Sound. In neither case do they seem to have gotten very far.

While local fishermen’s interest in trade unions and cooperatives highlights the depth of labor unrest on the N.C. coast between 1947 and 1953, I found little evidence of lasting success.

At the national level, both the IFAWA and the IFLWU (the union that led the menhaden fishermen’s strike in Beaufort and Southport in 1952-53) crumbled under the weight of McCarthy Era suppression and their own internal divisions.

Of course, local fishermen must also have faced fierce opposition to union organizing from the fish companies and local business leaders here on the N.C. coast.

But the truth is, I don’t know what happened to most of the fishermen’s organizing efforts.

As far as I can tell, nobody has ever looked more closely than I have at that tumultuous period from 1947 to 1953.

Yet I know I have only gotten a little glimpse at that moment in coastal history, when the state’s commercial fishermen dared to dream that they could come together in brotherhood and get a fair deal working on the water.

While we have much yet to learn about the history of fishermen’s labor organizing in N.C.,  we’re at least fortunate to have some truly extraordinary resources available on the menhaden industry and its history. 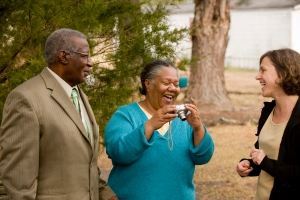 Barbara Garrity-Blake, right, with Primrose and Mary Jones in Adams Creek, N.C. in 2009. Primrose Jones was a cook on a menhaden boat. Photo by Scott Taylor.

A book that I go back to again and again is Barbara Garrity-Blake’s The Fish Factory, a deeply insightful look at the interior world of the menhaden fishery in Beaufort, N.C. and Reedsville, Va.

A cultural anthropologist, a longtime resident of Gloucester, N.C., and a good friend, Barbara also spearheaded an exciting community project on the menhaden industry in Carteret County and its legacy. Sparked by the closing of Beaufort Fisheries, the state’s last menhaden company, the project gathered oral histories and photographs, sponsored community forums and brought menhaden fishermen’s and factory workers’ stories to local schools.

It was a history project, but also a much-needed opportunity for community reflection, homecoming and, yes, grieving.

The project’s Facebook page is a treasure house of memories and photographs, and you can hear the oral histories at the Core Sound Waterfowl Museum and Heritage Center on Harkers Island. The museum also played a crucial role in the project’s success.

Another wonderful source on the history of Beaufort and Carteret County’s menhaden industry is Steve Goodwin’s new book, Beyond the Crow’s Nest: The Story of the Menhaden Fishery in Carteret County, N.C. 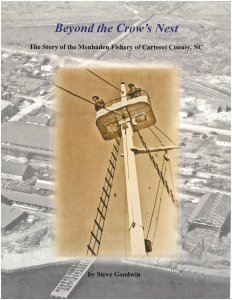 Steve is my favorite kind of historian: he’s a passionate amateur who has dedicated himself so thoroughly to a subject that he loves– and has a personal connection to (coming from a menhaden fishing family and having worked in the industry when he was a young man) — that he understands it to an unparalleled depth.

I go to Steve whenever I have a question about the history of menhaden fishing, and you may have noticed that I used several of the photographs from his personal collection in this series of blog posts. 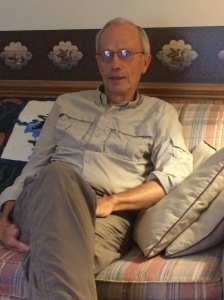 Steve Goodwin, author of Beyond the Crow’s Nest, at his home in Beaufort, N.C. Photo by David Cecelski

Beyond the Crow’s Nest is Steve’s magnum opus: an in-depth, but highly readable account that brings together his years of research on the local menhaden industry from 1865 to the closing of Beaufort Fisheries in 2005.

You can find copies of Beyond the Crow’s Nest at the Core Sound Museum Store on the Core Sound Waterfowl Museum and Heritage Center’s web site and at the on-line store at the History Museum of Carteret County in Morehead City.

5 thoughts on “The Fishermen’s Revolt– Southport to Swan Quarter”