Welcome back to Herring Week! This is part 8 of my special series on the history of the great herring and shad fisheries on the Albemarle Sound, once one of the largest fisheries in North America. In today’s post, I’m looking at a photograph from the Capehart family’s Avoca fishery in Bertie County in 1877.

This photograph was taken by a photographer from the U.S. Fish Commission during its incredibly thorough survey of the nation’s fisheries that was published in many volumes in the 1880s.

The original, glass plate negative of this photograph ended up at the Smithsonian Institution, which is where I found it.

This is the Avoca fishery at the peak of the herring and shad spawning runs: at least 30 men are pulling and heaving tens of thousands of fish onto the battery at the main fishing shelter’s wharf.

As soon as the fish are on the battery, the fishermen will either step on the bunt net’s lead line or attach wooden pegs in the battery so that the fish will not slide back into the water. Then they will raise a backboard to hold the net in place, so that the Pioneers can get to their sorting.

Note the women under the shelter’s eave. They are a few of the Pioneers, and they are getting ready to start the process of sorting, gutting, heading, salting and packing the fish.

They will work for hours on this haul’s catch, and when they’re done, the fishermen will be coming in with another haul.

Beyond the wharf, we can see Albemarle Sound, a fishing flat loaded with the seine and a dock with a small boat. On shore, we can see another of the fishery’s buildings, probably either the superintendent’s office or a barracks where fishermen bunked.

William C. Capehart, born in 1915 and the son and grandson of Avoca owners, suspected that there were few black men and women in eastern Bertie County who had not been employed by Avoca or his family’s neighboring fishery, Scotch Hall, at some point in their lives.

Most of those fishing hands were farmers or field hands at other times of the year. Some returned to their fields for spring planting in the middle of the fishing season with the understanding that they would send a cousin or another relative, or perhaps a neighbor, to take their place at the fishing beach. 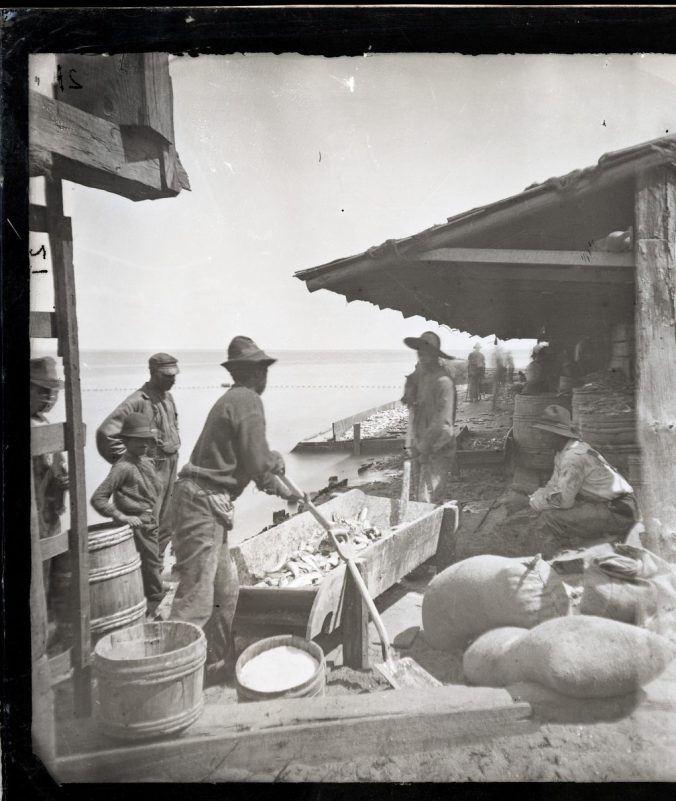 Avoca fishery, Albemarle Sound, ca. 1877. Young fishermen shoveling fish, perhaps mixing them with salt for the cooks in the fishery’s kitchen. The regular salting would have taken place under the shelter and in much larger troughs. Courtesy, Smithsonian Institution Archives

The most prestigious jobs at Avoca were the captains of the two fishing flats, the Chowan and the Albemarle. They tended, Col. Capehart recalled, “to be bigger men with a heavier fist.” They kept their crews straight, reasonably sober and on task.

Seine menders were also highly respected, and paid a premium: nothing delayed “shooting the seine” more than a torn net, and lost time meant lost money for both the Capeharts and the hands, who were paid by shares.

Some of the seine menders were neighbors, but the Capeharts were also known to go as far afield as Colerain, well up the Chowan River, to recruit a gifted mender.

In his interview with Lee Bumgarner of the North Carolina Maritime Museum in 1988, Col. Capehart recalled the names of three of Avoca’s seine menders: Joe Turner Harley, Arthur Hextall and Harry Rascoe.

Every fishery also needed a good cooper to make the barrels for storing the fish. At Avoca the cooper’s name was Frank Lawrence.

According to Col. Capehart, one of the shad-house foremen, James Capehart, was his family’s right-hand man at the fishery. Like the seine menders and the carpenter, James Capehart was a black man.

James Capehart was in charge of the whole onshore operation—sorting, packing, icing, and salting the fish and selling them to customers on the beach. Every evening he delivered his accounts and the money paid for fish to Col. Capehart’s father, after he had taken over the fishery from his father.

Every seine fishery also had a good many hangers-on, many of them children. An engineer on one of the fishing flats might consider tending the furnace beneath his dignity, so he’d have a young boy do it for him.

At Avoca, the Capeharts paid the hangers-on in fish, usually giving them enough to take home for supper, which was often why their mothers sent them down to the fishing beach in the first place.

At the same time, they were learning the ways of a fishing beach so that, when they were old enough, they would be ready to join a seining crew.

Many of the jobs were demanding, many required brawn and others brains, but there was a job for everyone at Avoca. In the days when the fishermen still used horse or mule-powered windlasses, a young boy could tend the horses that drove the windlass—it required little more than slapping the animals on the hindquarters when the fishery’s captain or lieutenant gave a signal.

Likewise, the men who handled the steam reels in the engine houses were often aged or somewhat disabled.

At Avoca, all the fish cutters and most of the other hands were Bertie County locals, but a significant number also came from the town of Edenton, on the other side of the Chowan River.

For reasons unknown, many of Avoca’s fishery hands also came from Franklin, Virginia, roughly 80 miles from Avoca. The Franklin crowd traveled down the Chowan River on the steamer Olive early in the winter and moved into their quarters next to the fishing beach.

They made barrels, cut firewood, helped to tar the seine and did other preparations for the fishing season, then stayed on as part of the crew.

A number of the Capehart fishery’s Franklin hands were aboard the Olive during one of the worst maritime disasters in the Albemarle’s history. In February 1903, while seeking shelter from a storm near the mouth of the Chowan River, the steamer was hit portside by a tornado, taking 17 lives.

Col. Capehart never forgot the songs that the fishing crews sang while moving the seine toward shore. He recalled that there was “nothing more soul-stirring than those crews singing on a moonlit night.”

A chanter on one boat would strike up a melody when they were a mile or mile and a half off the beach. Next the other men on his crew would join in, and then the hands on the other boat would raise their voices in response, their songs going back and forth across the water.

My old mistress promised me

When she died, she set me free,

This old Uncle Ed got bought

Done got a notion to die, Lord,

And on that  note– Happy Easter!

One thought on “Herring Week, Day 8– Singing on a Moonlit Night”