A historian has to love the clerks at the Albemarle seine fisheries: they kept meticulous daily records of the weather and water conditions, and the numbers and kinds of fish caught and their sales. They also broke the sales down into categories: corned, cut, raw and “at the beach.”

Today, after devoting my last two posts to discussing the Capehart family’s Avoca fishery in Bertie County, I am returning for the rest of my series on the history of the great herring and shad fisheries on Albemarle Sound to a group of 1905 photographs of Greenfield, Frank Wood’s fishery near Edenton, N.C. and the subject of my first 6 posts in this series.

In the case of Greenfield, the fishery account books have been preserved in the Hayes Collection at the Southern Historical Collection at UNC-Chapel Hill. Those records date from 1852 to the 1920s.

Because of Frank Wood’s clerk, Charles Johnson, of Winfall, in Perquimans County, we know that the fishing season in 1905 started on the 7th of March and ended on the 2nd of May.

We also have a day-by-day accounting of the weather, ranging from “very warm with light variable breeze” to “violent N.W. wind…very cool with good deal of ice.”

That was a far cry from the great catches a half century earlier: in 1867, Greenfield’s fishermen caught—and Greenfield’s women gutted and cleaned— a record 500,000 herring in a single haul.

But their catches in 1905 were still nothing to sneeze at. That’s especially true when one remembers that as I write this, in March of 2018, it is herring and shad season here in North Carolina and not a single river herring will be caught on all of the Albemarle Sound or its tributaries, at least not legally.

That is due to a ban on catching river herring that was enacted because fishery biologists have observed a cataclysmic decrease in their populations over the last half-century.

Catching herring and shad was just the first step toward having a successful seine fishery. The next step was sorting, cleaning and packing the fish for sale and required no less care or effort. At Greenfield, a group of women, who I have noted previously, were known as the Pioneers, first sorted the fish.

They had separate buckets for herring, roe herring, shad, buck shad, rockfish, perch, catfish and eels. Not infrequently, the fishermen also caught a few sturgeon, especially late in the spring.

Once they sorted the fish, the Pioneers carted them onto tables and cleaned them. They packed shad, rockfish and other fresh fish in boxes on ice.

According to his account books, Wood sold quite a few boxes of fresh fish to grocers in Virginia and eastern North Carolina as well as to customers who came to his fishing beach.

Some locals purchased 20 cartloads and some .70 cents worth.

The large majority of the fish, though, was sent to wholesale fish dealers in northern states. S.B. Miller & Co. at the Fulton Fish Market in New York City handled the bulk of Greenfield’s catch. 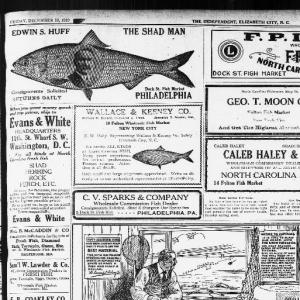 Albemarle Sound newspapers abounded with the ads of wholesale commission agents that encouraged local fishery managers to sell their catches through them. The wholesale fish dealers generally were based in New York, Philadelphia, Baltimore or Washington, DC. This is a page from the Dec. 19, 1919 edition of The Independent in Elizabeth City, N.C.

Founded in 1822, the Fulton Fish Market was the largest and most important wholesale fish market on the East Coast for generations. Though recently relocated to the Bronx, the Market was long a fixture near the Brooklyn Bridge on the East River in Manhattan.

Samuel B. Miller, born in 1827, was one of the early leaders of the Fulton Market Fish Mongers’ Association. He, and then later his sons, regularly advertised their services as fish commission agents in Albemarle Sound newspapers.

If wholesale prices up north fell too low, Frank Wood sold the shad and other fresh fish by the cartload to local farmers to be used as fertilizer, the price not being sufficient to justify the costs of cleaning and transporting them.

There was always a market for salt herring however. The cutters worked at blinding speeds to head and gut the fish. Henrietta Ford, Greenfield’s fastest cutter, reputedly could head and gut 60 herring a minute.

For the six-week fishing season, the women labored day and night like the fishermen, grabbing catnaps of 2 or three hours at a time whenever they finished their duties and were waiting for the fishermen to complete their next haul.

Salt was one of a seine fishery’s largest expenses. Frank Wood’s father, Edward, estimated in 1871 that a typical seine fishery used between 2,000 and 7,000 bushels of salt a season.

The salt house was under the fishery’s main shelter, the building that you can see in this photograph. After the shelter workers washed the herring, they poured them into salting trays, a half-barrel at a time, and mixed them with a peck of salt. They then put the fish into hogsheads or vats and threw them into dripping troughs where they drained a day or two.

Next they packed the herring in barrels with a half-bushel of salt per barrel. The lids of the barrels, made by a cooper on site, were pressed tight with a mechanical lever.

A barrel held approximately 500 gross herring, 1,000 cut herring or 600 roe herring. Depending on the year, a fishery utilized somewhere between 1,000 and 5,000 barrels or kegs a season.

At Greenfield, as at most, if not all, of the Albemarle fisheries, the salt arrived from Turks Island, one of the British West Indies, by schooner. The salt industry had been the lifeblood of the economy at Grand Turk and its neighbor, Salt Cay, since the 17th century. 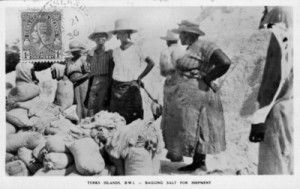 At Grand Turk and Salt Cay, Bermudans first developed the local salt trade, sailing 750 miles across the Atlantic in order to take advantage of the little islands’ salinas.

The salinas were shallow, inland swales that filled either with tidal water or with saltwater that percolated up through the soil.

In time, the salt traders improved the salinas, turning them into an elaborate system of saltpans bordered by rock and utilizing canals and windmill-powered gates to regulate the tide. 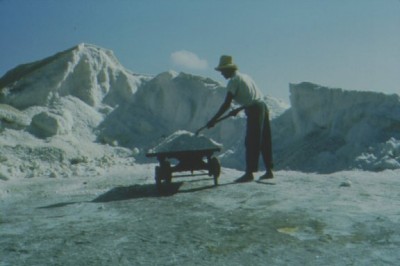 The scraping of salt off the pans was called “salt raking.” It was not an easy job: the heat was suffocating, standing in brine all day led to boils and infections, and salt rakers often found that their wounds would not heal. The fierce sun reflecting off the all-white saltpans was also said to lead to blindness or near blindness.

An enslaved woman named Mary Prince recalled what it was like. She was a salt raker on Turks Island not long after 1800.

In 1829, after she was no longer at Turks Island but was still enslaved, she dictated her life story to an anti-slavery activist in London.

In The History of Mary Prince, a West Indian Slave…. (first published in 1831), she recalled her days at Turks Island:

“I was given a half barrel and a shovel, and had to stand up to my knees in the water, from four o’clock in the morning till nine, when we were given some Indian corn boiled in water, which we were obliged to swallow as fast as we could for fear the rain should come on and melt the salt. 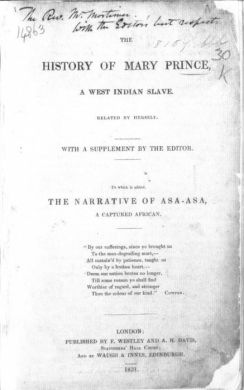 “We were then called again to our tasks, and worked through the heat of the day; the sun flaming upon our heads like fire, and raising salt blisters in those parts which were not completely covered.

“Our feet and legs, from standing in the salt water for so many hours, soon became full of dreadful boils, which eat down in some cases to the very bone, afflicting the sufferers with great torment. We came home at twelve; ate our corn soup, called blawly, as fast as we could, and went back to our employment till dark at night.

“We then shoveled up the salt in large heaps, and went down to the sea, where we washed the pickle from our limbs, and cleaned the barrows and shovels from the salt….

“We slept in a long shed, divided into narrow slips, like the stalls used for cattle. Boards fixed upon stakes driven into the ground, without mat or covering, were our only beds.

“On Sundays, after we had washed the salt bags, and done other work required of us, we went into the bush and cut the long soft grass, of which we made trusses for our legs and feet to rest upon, for they were so full of the salt boils that we could get no rest lying upon the bare boards.”

The nature of the work did not change much after the end of slavery.

The salt laborers worked within sight of the great humpback whale migrations through Turks Strait and some of the hemisphere’s most spectacular coral reefs, but their lives were hard and usually brief. Strikes and the violent suppression of worker rights advocates occurred frequently.

Considered the highest quality available in U.S. markets, Turks Island salt was indispensable to the Albemarle fisheries, but was hardly limited to preserving fish.

At the time that this photograph was taken, the average American used 40 pounds of salt a year to preserve fish, pork, beef and vegetables, salt being, along with vinegar, essential to food preservation until new technologies for refrigeration, ice making and canning became available for household use later in the 20th century.

Next up– Herring Week, Day 10– Light in the Darkness