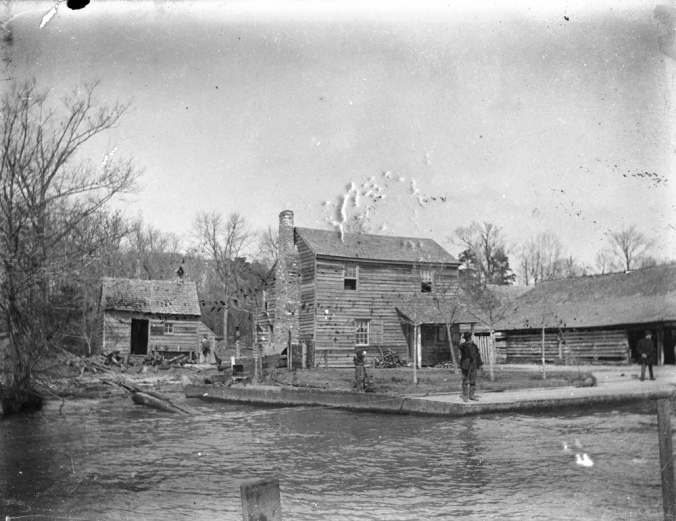 Greenfield fishery, 1905. Welcome back to my Herring Week! In today’s post, we’re looking at the building that was called “the Office,” shown in the middle of this photograph. The fishery’s owner, Frank Wood, lived at the Office during the shad and herring season, along with his wife and children.

They called it “the Office” because his living room served as the fishery’s business center, where contracts were made, fish bought and sold, workers paid and liquor dispensed.

To the right is one end of the fishery’s main shelter, where the workers sorted, cleaned, salted and packed their catches. Logs and heavy boards served as a breakwater.

In the foreground, standing on the wharf, you can see one of the African American boat captains, Mack Towe. He came down from his home in Winfall to captain the Greenfield every spring.

Known for his booming voice, Towe is barking orders to the “roper,” the hand whose job it was to untie the toggles that connected the seine to the warp (hauling line) as the fishing flats neared the shore.

At the moment that he wanted the steam engines to shut down, Towe would shout “Out horse!” a vestige of the many years when horses, not steam engines, turned large windlasses in order to haul in the seine.

The building to the left is the office kitchen. You can see a woman carrying something, perhaps kindling, on the right side of the kitchen. She may be the woman that my primary informant, Mrs. Rebecca Wood Drane, remembered as “Aunt Liney,” the office kitchen’s cook.

Mrs. Drane recalled that Ms. Liney identified herself as part Indian. Of course, many native peoples had historically resided on that north side of Albemarle Sound, people descended from the Choanoac, Meherrin, Nottoway, Nansemond and Tuscarora, among others.

You might remember that I recently wrote in this blog about the mixed-race peoples—Indian, black and white— that have historically resided in the Winton-Cofield-Ahoskie sections of Hertford County. As I mentioned in that post, my friend Marvin T. Jones, who is from Cofield, refers to that area as “the Winton Triangle.”

That area was located on the Chowan River, only a short passage from Greenfield. There were quite a few other mixed-race communities north of the Albemarle Sound, but that is one likely place to have been Ms. Liney’s home when she wasn’t cooking at Greenfield.

The office kitchen provided meals for the owner’s family and the fishery’s managers. Most of the cooking at Greenfield, though, was done in a larger kitchen located on the far side of the Quarters.

At that more capacious kitchen, two other cooks, Mourning Granby and Martha White, oversaw a busy operation that fed the fishing hands, fish cutters and the fishery’s tradesmen.

The rations may not have been especially varied, but they were hearty and fresh: hefty portions of fried fish, salt pork, greens and pone cornbread. The women baked the cornbread in a brick oven that was separated from the Quarters by the fishery’s main road.

Cooking was endless. The fish cutters, salters and packers only slept in two or three hour stretches at a time, while the fishermen were hauling the seine, and vice versa, and neither had any time to wait for or dally over their breakfasts, dinners or suppers.

That system of labor, eating and resting closely mirrored that used on sailing ships in the 18th and 19th centuries. It had developed in the Albemarle fisheries before the Civil War, when many of the fishery’s hands were still enslaved.

Another carryover from the antebellum period and the ways of a sailing ship was the tradition of allotting every fisherman a daily jigger or two of West Indian rum.

Albemarle fishery owners had typically obtained their rum from Jamaica, Antigua and other colonies in the West Indies. Often they did so in exchange for salt herring. At Greenfield, the clerk dispensed the rum to the fishermen, but apparently did not set any aside for the women.

Next up– Herring Week, Part 12– The Last Seine Fisheries