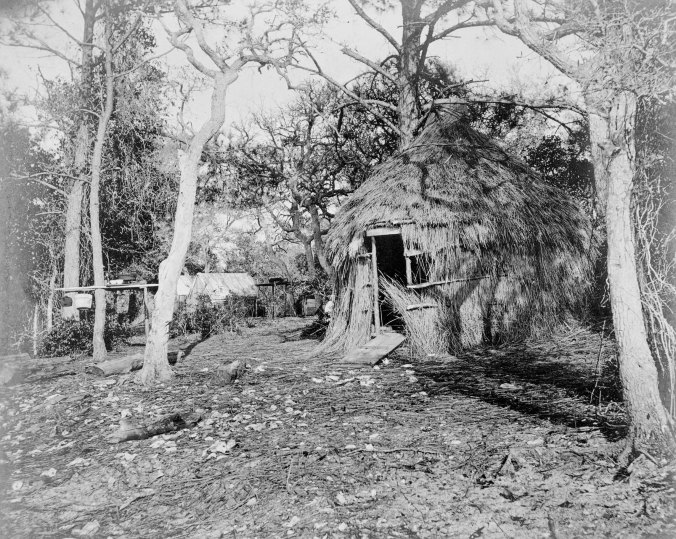 A shad fisherman’s camp on the Lower Neuse River, possibly at or near James City, N.C., circa 1900. Fishermen constructed their huts out of cedar limbs or another supple hardwood and thatched them with saltmarsh cordgrass or black needlerush. Typically they bound them together with yucca fibers. These round huts with conical roofs were a spartan home away from home for shad fishermen and, occasionally, for their families.

“There are a dozen or more of the little groups in the space of a few miles,” a correspondent for the New Berne Weekly Journal reported in 1894. However, he noted that he saw about 18 of the “little dwellings” just at Otter Creek.

After the Civil War, shad fishing was a big business in the Neuse River estuary, but one undertaken in a very different fashion than in the big haul seine fisheries on the Albemarle Sound that I chronicled in my recent 13-part series. (You can find a link to the first post in that series here.)

Fishermen traveled long distances to go shad fishing on the Neuse. The largest group of itinerant fishermen came from Morehead City, Beaufort and other parts of Carteret County, where they worked saltwater fishing grounds the rest of the year.

With little profit to be made on their home waters during the winter, many of those fishermen relocated in late January or February to shad and herring beaches as far away as the Cape Fear and Tar Rivers.

Some even traveled to the Albemarle Sound. My friend Ed Pond, in Davis Shore, recently told me that his great-uncle was one of the Carteret County fishermen that used to make that trip. His name was Wallace Davis (1862-1899), and he was also from Davis Shore.

Most headed to the Neuse. In 1880 a survey of the region’s shad fisheries reported that fishermen employed an astonishing 3,750 stake nets (also called “set nets”) in the river’s waters below New Bern. A hundred and fifty men worked the nets. Sixteen men worked another 160 set nets upriver of the city.

Those nets were typically 20 yards in length and had a 5 and ½ to 6-inch mesh.

The survey estimated that New Bern’s fish dealers owned 1,200 of the nets and hired crews to work them, but that fishermen from Carteret County and elsewhere on the seacoast owned and worked the majority.

That survey indicated that New Bern fish dealers also owned and hired crews for 25 dragnets and 4 pound nets on that stretch of the Neuse. In addition, four large crews of fishermen still harvested shad in old-fashioned haul seines from beaches below New Bern.

The shad fishery on the Lower Neuse was hard, cold work. The fishermen often contended with icy waters and three to four-foot swells, and the prevailing nor’ easterly winds were bone chilling.

The fishermen’s huts proved surprisingly sturdy and cozy under the circumstances, though a warm fire, good company and a bit of whiskey never hurt either.

In 1895, Frank E. Hege, a correspondent for the New Berne Weekly Journal, described the scene on the Lower Neuse during the shad’s spawning runs:

In the later part of February and from then to May, hundreds of small sail and row boats are using their drift nets up and down Neuse river catching Shad….Every boat used for drift netting contains two men, one to throw out and haul in the net, the other to row. They divide proceeds as follows:  As a rule the boat and net belong to one man, so he gets two shares, the oarsman gets the other share. ‘Tis very interesting to go up the river just after dark, for on either shore every quarter of a mile or less, you can see large fires burning and hear men singing as they fish.