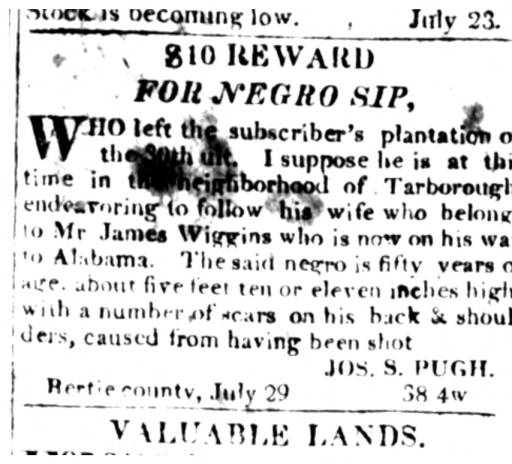 From the Raleigh Register and North Carolina Weekly Advertiser, 24 July 1818.

This is my 5th post from the Belle of Washington’s voyage on Albemarle’s Sound.

The second runaway slave advertisement that I want to talk about concerns an enslaved man from Bertie County, N.C., his love for his wife and a long and impossible journey.

The Belle of Washington will pass the shores of eastern Bertie County on the last day of our voyage. At that time, I hope you will remember the story of a fugitive slave named Sip.

In July of 1818, a Bertie County planter named Joseph Pugh took out a runaway slave advertisement in the Raleigh Register and the North Carolina Weekly Advertiser.

In that reward notice, he explained that his slave Sip had escaped a month earlier.

“I suppose he is at this time in the neighborhood of Tarborough,” Pugh said. Tarboro, as it’s now spelled, was a long ways west of Pugh’s plantation in Bertie County, especially if Sip was traveling by foot.

Pugh knew where Sip was headed. He expressed absolute confidence that the runaway slave was “endeavoring to follow his wife who belongs to Mr James Wiggins who is now on his way to Alabama.”

Wiggins was relocating his family and approximately 20 enslaved men, women and children to Morgan County, Alabama.

At that time, a great many planters were leaving North Carolina and moving to Alabama, Louisiana, Alabama, Arkansas and Texas. Some sought fresh naval stores lands, having exhausted the pine forests here. Others sought cheaper land and more lucrative cotton farming opportunities in the Deep South.

Planters might willingly move to Alabama, but no slave escaped from North Carolina and voluntarily headed to Alabama. That was the last thing that a fugitive slave wanted to do. Slavery in Alabama had an even worse reputation than in North Carolina.

In fact, coastal planters often punished rebellious slaves by selling them to Alabama or elsewhere in the Deep South.

Sip did not care. He was bound for Alabama. He was attempting to make a journey of 600 miles, twice as far as the runaway slave Moses in my last post and also twice as far as W. P. Inman, the Confederate deserter in Charles Frazier’s novel Cold Mountain that I also mentioned in that post.

Unlike the real life slave Moses and the fictional Inman, Sip was not headed home. He was headed to the last place on Earth that most fugitive slaves wanted to go.

Sip was not a young man, either. “The said negro,”Pugh wrote of him, “is fifty years of age, about five feet ten or eleven inches high, with a number of scars on his back & shoulders, caused from having been shot.”

The scars on Sip’s back and shoulders revealed that this was not the first time that he had escaped. In fact, using UNC-G’s database of runaway slave advertisements, I discovered that a slave named Sip of roughly the same age had escaped at least two other times– once in 1795 and again in 1798.

From the State Gazette of North Carolina, 12 March 1795

Those ads mention that Sip– if it is the same man– had been to sea, and one indicates that he had been branded with the initials “G. M. K.” on both cheeks by the time he was 14 years old, because he so persistently ran away.

Obviously he had eventually been caught on those occasions.

Though an old man by the standards of that day when he headed to Alabama, Sip was bound and determined to follow the woman he loved on what amounted to an impossible journey. A suicide mission, some would say, and Sip had to have known it when he left Bertie County.

What lay ahead of him: strange woods, unknown swamps, slave patrols, bounty hunters and bloodhounds. Alabama, for God’s sake.

One false step, and Sip’s journey was over. He could have been undone by a single misstep, bad luck, a betrayal, his ignorance of local customs or a thousand other things.

All this Sip had to know. When he escaped from Pugh’s plantation in Bertie County and headed not east to the sea, or north toward the Free States, but to Alabama, he had to know that he was taking a path that was very unlikely to end well.

Yet he headed to Alabama anyway.

There’s much we don’t know about Sip and his journey to find his wife, but I think we can be certain:

This was love that makes slaveholders’ efforts to dehumanize black people seem small and ridiculous.

These waters on which we float, these shores that we pass, there are stories here that you will not find in history books.