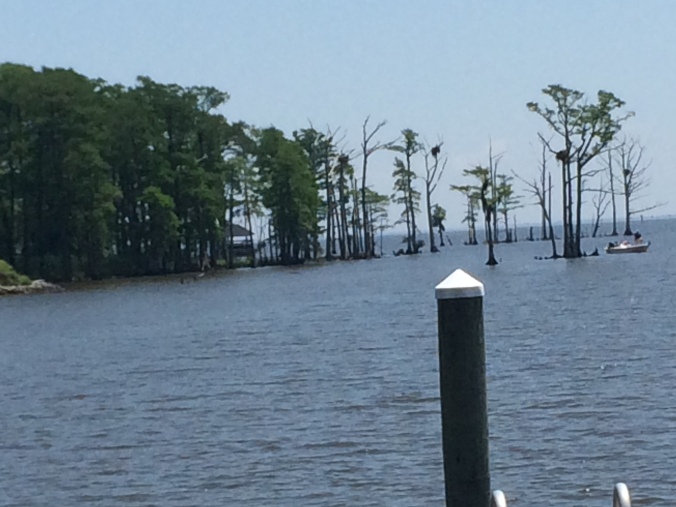 At the mouth of the Yeopim River. You can see at least 3 osprey nests high in the treetops. Photo by David Cecelski

This is my 8th and last dispatch from the Belle of Washington’s tour of the Albemarle.

Now that I’m home, I’m thinking back on my time on the Belle of Washington and remembering some of the highlights of the voyage. I know I’ve already written a good deal about the “Tour of Old Albemarle” and the history of that part of the Albemarle Sound this week.

But I thought I’d take just a minute to mention a few of the things that I didn’t have time to write about while I was on the boat.

I guess I should confess that I was actually in Bland’s story about billy goat wrestling on Goat Island, but that makes it even less likely that I’m going to tell that story here!

As we traveled Albemarle Sound, we did enjoy many good times and much laughter. But we also had many important historical lessons far beyond what I have discussed here on my blog. 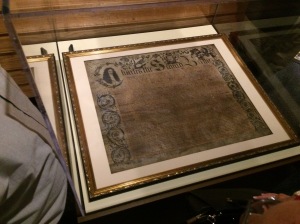 Carolina Charter of 1663, on display at the Museum of the Albemarle, Elizabeth City, N.C. Photo by David Cecelski

For instance, we got to see and learn about the original Carolina Charter of 1663, the document by which King Charles II of England gave 8 noblemen the right to colonize what are North Carolina and South Carolina today.

The Charter is considered one of the most important documents related to North Carolina’s history. It is usually kept in a vault at the State Archives of North Carolina in Raleigh, but it is on temporary display at the Museum of the Albemarle in Elizabeth City.

I’ll also always remember our visit to the Newbold-White House.  At that state historic site, the guides taught us about the early colonial history on the Albemarle when, for a brief period, Quakers and other religious dissenters, as well as outlaws, runaways and outliers of many other stripes, found a refuge here and played a leading role in the region’s political life. 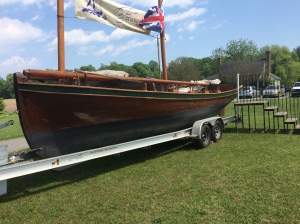 The staff and friends of the Newbold-White House also treated us to a glorious lunch, for which we could not have been more thankful.

And I must say I had a pretty great nap under an oak tree in front of the Newbold-White House.

The Belle of Washington’s passengers at the Newbold-White House, a 1730s Quaker homestead in Perquimans County, N.C. Photo by David Cecelski

The historical tours of the Albemarle were all fascinating, but many of the things that I found most special about our voyage on the Belle of Washington weren’t really much about history.

For instance, I will always remember the beauty of the Pasquotank River early Friday morning, as we sailed south from Elizabeth City toward the Albemarle Sound.

Bland, who grew up in Elizabeth City, narrated much of that part of our voyage, and Tom enthralled us with stories about the natural history of the river and the surrounding pocosin swamps. 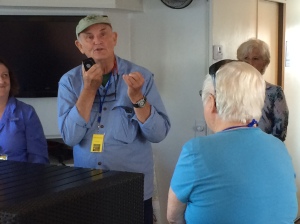 The waters around the mouth of the Yeopim River and Edenton Bay charmed me no less.

Above all, I’ll remember the new friends I made. The passengers on the Belle of Washington were interesting, generous hearted and deeply curious, always open to new stories and new adventures.

In addition, they excited me with their own stories. Many shared old family stories with me, and several described an ancestor’s letters or a diary that they thought I might be interested in seeing. Mostly, though, I was just glad to spend time with such good folks. I look forward to seeing them again, too.

I was also very happy to see some old friends. Some of my favorite people greeted Tom, Bland and me and the other passengers on the Belle of Washington when we were in Elizabeth City and Edenton.

And one of them—she knows who she is— when she and her daughter walked into a reception for us at the old Chowan County Courthouse in Edenton, I felt a riotous happiness well up in my heart!

Even if our voyage on the Belle of Washington had not been filled with a single other joy, and it was filled with many, seeing my old friend again would have made this a wonderful and unforgettable trip.