Tom and Bland and I and all the good people who are sharing this voyage on the Belle of Washington with us are now looking ahead to Edenton, our next port of call, and Edenton for me has always been and remains, far and away above all else, the town of Harriet Jacobs.

Edenton was incorporated in 1722 and was the most important seaport on the Albemarle Sound throughout the 18th century.

Walk through Edenton’s old burial grounds and you’ll find the graves of a justice on the first U. S. Supreme Court and many of the Albemarle’s most influential planters, merchants and ministers.

Yet the town’s most famous resident is a young African American woman who was a slave.

Harriet Jacobs in 1894, at the age of 81. From Harriet Jacobs, Incidents in the Life of a Slave Girl, Written by Herself, edited by Jean Fagan Yellin (Harvard U. Press, 1987)

Her name was Harret Ann Jacobs, and she was born in Edenton in 1813. Fleeing the sexual demands of her owner’s father, she escaped from his household in 1835 and hid with family and friends until 1842.

During that time, she worked assiduously behind the scenes to protect her son Joseph and her daughter Louisa Matilda.

Eventually, with much determination and the help of allies, both black and white, Jacobs escaped to the north, on a ship that traveled the same waters as the Belle of Washington.

“God… gave me a soul that burned for freedom and a heart nerved with determination to suffer even unto death in pursuit of … liberty.”

And she wrote a memoir, first published in 1861, that is now considered an American classic. She titled that memoir Incidents in the Life of a Slave Girl, Written by Herself.

Jacobs’ book is read around the world today. Often compared to The Diary of Ann Frank, her narrative frequently rises to new heights of popularity in countries where people of color and/or women are in the midst of popular struggles for human rights.

Original cover of the bestselling new Japanese translation of Harriet Jacobs’ Incidents in the Life of a Slave Girl.

In fact, a new translation has even been a bestseller recently in Japan, more than 150 years after Jacobs wrote the book.

Japanese critics have observed that the book’s surprising popularity stems from the way that Jacobs’ story speaks to women seeking to break out of their traditional low status in Japanese society.

For many of those foreign readers, of course, Jacobs’ story in Incidents in the Life of a Slave Girl is all they will ever know about North Carolina’s history, which, if they can only read one book about us, I don’t think is a bad thing at all.

In its literary merits and enduring popularity, Jacobs’ Incidents is also one of the most important American slave narratives. Many scholars would say that its only peer is Frederick Douglass’ Narrative of the Life of Frederick Douglass, An American Slave, which was first published in 1845.

But I’m reluctant to compare Jacobs’ narrative even to Douglass’ Narrative, because it’s such a different work.

Central to that difference is the fact that Harriet Jacobs was not only a slave, but also a woman—and a woman with the courage to overcome the 19th century’s silence over the sexual abuse of slave women and demand that the issue become part of public life and a part of history.

When the Belle of Washington comes to rest on Edenton’s waterfront, I will tell the passengers that, if it was up to me, we would save our tour of colonial Edenton for another day.

No, I will tell them, go instead to the Edenton State Historic Site’s gift shop and buy a copy of Incidents in the Life of a Slave Girl. Take in the Harriet Jacobs exhibit there.

Then go through Incidents’ pages as you stroll Edenton’s streets. Walk in Harriet Jacob’s footsteps. Explore her world. See Edenton through her eyes.

Come to know the Albemarle’s history in a way that no other historical document can reveal to you.

I will also tell our shipmates: do this in the same spirit that you might go to New Bedford to discover the world of Moby-Dick or that you might visit Amherst, Mass., to gain a deeper appreciation for Emily Dickinson and her poetry.

And there’s so much evidence of Jacob’s story that is still to be found in Edenton. Visit Edenton offers Harriet Jacobs tours every February, but you can also take a self-guided tour of the most important sites that appear in Incidents in the Life of a Slave Girl anytime.

You can find a link to that self-guided tour here. It includes the site of her grandmother Molly Horniblow’s house, where Harriet hid in a tiny attic garret for six years and 11 months.

The self-guided tour also takes you to St. Paul’s Episcopal Church, at the corner of Broad and Church Streets. Jacobs’ children were baptized there, and the minister’s support for slavery led her to lose faith in southern Christianity.

Old Chowan County jail, Edenton, N.C. In Incidents in the Life of a Slave Girl, Harriet Jacobs described how Dr. James Norcum jailed her children, brother and aunt here. She had escaped from his plantation, and he was hoping that their jailing would drive her out of hiding.

You can also visit the former site of Martha Hoskin Rombough Blount’s home on Queen St. She was a white friend and ally, and after fleeing Dr. James Norcum’s sexual advances, Jacobs hid at her home for a time.

And, while its story is painful to contemplate, you have to visit the former site of Dr. Norcum’s home as well.  Jacobs was willed to the doctor’s young daughter in 1825, after the death of her first owner, and she lived in his house on West Eden Street beginning at the age of 12.

Norcum sexually harassed Jacobs from the time that she was a young girl. He repeatedly threatened her and sought to make her his concubine.

You can visit these and many other sites related to Harriet Jacobs’ life on this walking tour.  And I might suggest you finish your tour by standing on the waterfront and looking out into the bay through which she eventually sailed to freedom in 1842.

In the North, Jacobs joined the anti-slavery cause, and she fought for women’s rights. 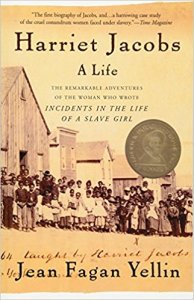 We could talk all day about Harriet Jacobs, but I won’t tell you more here. Just know that it’s worth a trip. Come to Edenton. Bring Incidents in the Life of a Slave Girl with you, or buy a copy there.

Maybe bring a copy of Jean Fagan Yellin’s wonderful biography of Harriet Jacobs with you, too, if you want to learn even more. You can find a link to Harriet Jacobs, A Life here.

Walk Edenton’s streets and come to know the Albemarle’s history in a deep and complex and troubling way, but also a way that is full of struggle and hope and love, the way life really is.