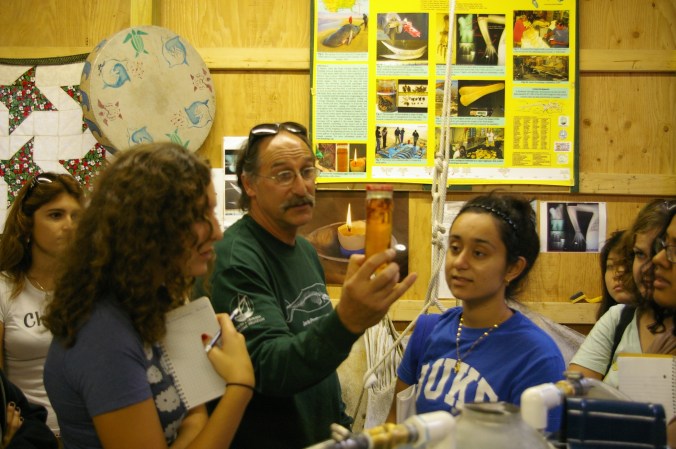 A memory. As part of my research on the William F. Nye Co.’s bottlenose dolphin fishery at Hatteras Island, I visited Keith Rittmaster at the old mobile home trailer that he used as the headquarters for his research on stranded sea mammals.

Keith is the curator of the natural history collections at the North Carolina Maritime Museum in Beaufort, N.C., but at that time the trailer sat a mile north of the museum in a rather deserted part of Back Bay, next the ruins of an old fish factory.

Keith is one of the country’s foremost authorities on the preservation of whalebones and his skeletons hang in natural history museums across the United States.

His wife, the marine biologist Vicky Thayer, was there, too. She’s the head of the sea mammal stranding program on the central part of the North Carolina coast.

I have known Vicky since our college days. I first met her when she was getting a graduate degree at the Duke University Marine Laboratory in Beaufort. At that same time, I was a student in the lab’s semester-long undergraduate program in marine biology.  (I was a history and biology double major.)

Keith and Vicky are the driving forces behind the sea mammal stranding program. If a whale or dolphin, or a seal or manatee even, washes ashore anywhere near Beaufort, they are on the scene immediately.

They coordinate a rescue, if possible. If they cannot save the creature, they lead a necropsy team that endeavors to figure out what contributed to the animal’s death.

Because of that work, Keith and Vicky have a special authority to handle the remains of whales and dolphins in a way that would not otherwise be permissible under federal conservation laws that prohibit the use of or trade in marine mammal products.

That’s why I was there. That’s also why my friend and colleague, Professor Vicki Szabo, was there.

Vicki teaches at Western Carolina University. She’s the coolest historian ever: she specializes in the uses of whalebone by Vikings and other North Atlantic maritime peoples during the Middle Ages.

Like me, Vicki was interested in the historic uses of whale and dolphin oils. We both wanted to learn more about the process of extracting oils from bottlenose dolphins.

I was interested, in particular, in the oils obtained from the echolocation organs that the William F. Nye Co.’s watermen sought so ardently on Hatteras Island early in the 20thcentury.

For more than 2 decades, the William F. Nye Co., of New Bedford, Mass., operated a bottlenose dolphin fishery on Hatteras Island, which of course is one of the Outer Banks of North Carolina. Local fishermen caught the sea mammals in sweep nets.

They butchered the dolphins partly in order to gain their hides, which were turned into a kind of leather.

Mostly, however, the William F. Nye Co.’s fishermen pursued the bottlenose dolphins in order to obtain the valuable oils contained in their jawbones and in their “melons.”

The melon is an organ that is found in the forehead (between the snout and blowhole) of bottlenose dolphins, pilot whales and other toothed whales.

Today most cetacean biologists believe that the melon and lower jawbone are the centers of dolphins’ ability to use sound waves to detect distant objects, to navigate and to locate and pursue prey. They refer to that sonar-like ability as “echolocation.”

(I shouldn’t really refer to dolphins’ ability to echolocate as “sonar-like.” In actuality, their echolocation ability far exceeds that of manmade sonar.)

At that time, I was doing research for a scholarly article on the William F. Nye Co.’s dolphin fishery at Hatteras Island. For that reason, I wanted to gain a better appreciation for how the company’s workers extracted the oil from the dolphins’ bodies.

But more important to my research, I wanted to see what the oil looked like fresh from the beautiful creatures’ bodies.

A prevailing theory about the discovery of the head oils’ extraordinary qualities as the finest lubricant available for clocks, watches, navigational instruments and other fine machinery is that whalers discovered it when they were hunting in the Arctic.

In the late 1700s and early 1800s, Yankee whalers found their navigational instruments sometimes froze in those frigid seas, which of course had the potential to be very dangerous.  Those instruments included the clocks and chronometers that were necessary in that age to determine latitude and longitude.

The seamen on whaling ships occasionally harpooned and ate dolphins, however. According to some accounts, those Arctic seamen noticed the extraordinary clarity and color of the oils in the animals’ lower jawbones and melons when they butchered them.

Then, when they lubricated their instruments with the oil, they discovered that the oil did not freeze in Arctic temperatures, unlike the other oils, including other whale oils, that they had traditionally used to lubricate those navigational instruments.

Eventually, sailors also discovered that the oil did not degrade or coagulate in the heat of the Tropics, either.

Those oils possessed other exceptional qualities that endeared them to the horological trade as well.

Well into the 20thcentury, many makers of watches, clocks and other fine machinery believed that the oils taken from the heads of dolphins and pilot whales were superior both to other animal and plant oils and petroleum products. Indeed, they might still be in use if not for the passage of marine mammal conservation laws that prohibited the killing of bottlenose dolphins in the U.S.

So more than anything, I wanted to see what this extraordinary oil looked like after it had been extracted and stored.

Keith had removed the frozen carcass of a bottlenose dolphin from a freezer earlier in the day. That particular dolphin had washed ashore a couple weeks earlier, though I don’t think Keith and Vicky and their necropsy team had been able to determine its cause of death. 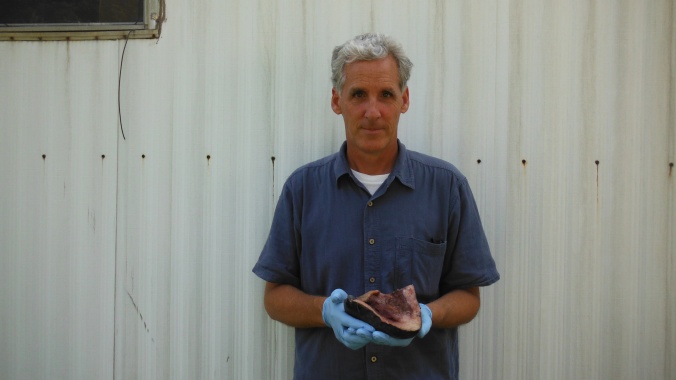 We got to work: Keith had already removed the melon and the glands entwined in the lower jaw bone, so we used a tool that was basically a somewhat sophisticated mortar and pestle with a funnel, along with a filter in the mortar’s bottom, to grind the organs and extract the oil from them.

Our process was hardly as sophisticated as the one that the fishermen used at Hatteras Island or that the William F. Nye Co.’s refinery workers employed in New Bedford, but it would do.

(In the early 20thcentury, the refinement of the oil occurred initially on Hatteras Island and then more fully in New Bedford.)

It didn’t take long, but by the time we were done, we were covered in oil and we smelled like, well, a beached whale that had been in the summer sun a little too long.

But the oil was there. The oil especially from the lower jawbone was stunning: it was the golden color of wildflower honey. The color did not at all resemble the other whale and dolphin oils that Keith showed us earlier in the day.

By way of comparison, Keith had also showed us samples of petroleum and plant-derived oils.

Those other oils ranged in color from a rather subdued nut brown to pitch black. In addition, the dolphin jawbone oil also had almost no blood or particulates floating in it. (The melon oil, though also impressive, did.)

And yes, I could see how sailors in the Arctic Sea might have looked at that oil and thought that it might be worth trying in the instruments for which they cared most, the ones that got them home.

Keith Rittmaster is currently leading an extraordinarily worthwhile effort to raise funds to build a unique facility called the Bonehenge Whale Center in Beaufort, N.C. When completed, the facility will serve as a base for research, exhibit preparation and display, marine conservation, educational programs and stranded specimen collection and maintenance that focus on North Carolina’s whales, dolphins and porpoises. You can learn more about the facility and how to contribute to its success at the Bonehenge Whale Center’s web site here.