This is the 3rd part of a series celebrating the 50thanniversary of the Hyde County school boycott, a remarkable chapter in the history of America’s civil rights movement and the subject of my first book, Along Freedom Road. Today– a legendary teacher named Letha Selby launches the school boycott.

As we near the 50thanniversary of the Hyde County school boycott, I’ve been thinking about what the people in those remote coastal communities along the shores of Pamlico Sound taught me about the history of the civil rights movement in America.

One thing I learned for sure was this: it was the grassroots, not the national civil rights groups, that were the driving force behind the African American freedom struggle here in eastern North Carolina.

In Hyde County, the people at the forefront of the school boycott and the civil rights movement were crab pickers and oyster shuckers, farmers and storekeepers, field hands and cooks and maids.

Here’s a scene that captures that dynamic—it’s one of my favorite moments in my book,  Along Freedom Road. I’ve edited it for length.

The date: exactly 50 years ago—August 1968. Hyde County’s black parents had persuaded Golden Frinks to visit Hyde County and help them to figure out what to do about the school board’s plan to close their historically black schools.

Frinks was the Southern Christian Leadership Conference’s field secretary in eastern N.C. He had worked with Dr. Martin Luther King, Jr. for years.

Frinks had been reluctant to come to Hyde County. At the same time, SCLC was holding its first annual conference since Dr. King’s assassination. He did not relish missing the conference (which was in Memphis, Tenn.) in order to attend a meeting at a little Baptist church in Swan Quarter, a remote fishing village on the western side of Hyde County.

Golden Frinks did not have a good first impression of Hyde County….  He traveled to Swan Quarter through countryside so desolate and communities so impoverished that he could not believe the prospects for a civil rights victory would be good.

When he met the small crowd of black citizens, perhaps thirty in all, who were waiting for him at Job’s Chapel, he did not feel entirely welcome or comfortable at first. The elders of the church greeted him with a solemn dignity that evoked an earlier era, not 1968.

A younger Golden Frinks at the time of the Williamston Freedom Movement in 1964. From the Capus Miller Waynick Papers, East Carolina University Special Collections

Most of the assembly reminded him of the old country people who lived beyond Edenton [his hometown], out by the Great Dismal Swamp…. Frinks’ afro and gold chains did not fit this atmosphere.

A majestic elderly women with a walking stick also sat silently in front of him, staring at him reproachfully throughout the meeting.

“The only thing I was thinking about was I had missed going to Memphis,” Frinks told me.

After an opening prayer, the group explained to Frinks their feelings about the threat to the O. A. Peay School and the Davis School, the county’s two historically black schools.

Their point of view was clear: “We built that school up there,” they told him. “They want to take it.”

The black leaders wanted Frinks to give them some direction and the support of the Southern Christian Leadership Conference. 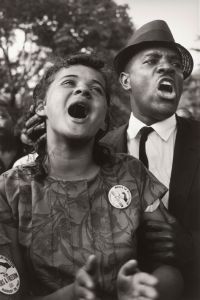 Jacquelyn Bond and Golden Frinks singing “We Shall Overcome” at the March on Washington in 1963. Courtesy, National Museum of African American History

However, Frinks thought they expected miracles. He was reluctant to encourage them or make commitments. The rural locale, the isolation, the lack of previous civil rights activism and the short time before the opening of the school year all indicated to him that their problem could not warrant a great deal of his involvement. His words were discouraging.

After listening to Frinks endeavor to lower their expectations, the elderly woman in front of him rose slowly to her feet aided by the person next to her.

Letha Selby was 78 years old and commanded respect in Hyde County.  Ms. Letha, as she was known, had taught in local black schools for more than 40 years. Her high standards and unshakable will were legendary….

Her example, however, had been her most effective lesson. She was a longtime deaconess and a founder of the Women’s Home Mission in the Disciples Church. She had been a founding member of the local NAACP and the first black woman in the county to vote.

She had also raised three children, all of whom became schoolteachers, and she had often reared other children whose parents could not care for them.

The church sat silent before her.

Pointing her cane directly at Frinks, Letha Selby admonished him angrily.  “Listen here,” she told him. “Don’t come down here telling us what we cannot do!”

She did not have to look behind her to know that she spoke for everybody in the church.

“You tell us what you want us to do so that we will get our schools back,” she demanded. “That is what we want.”

Stunned by her fury and conviction, Frinks suddenly forgot about Memphis…. He asked more questions. He talked about the problems that he had seen black people encounter during school desegregation elsewhere….

Their resolution gave Frinks a new optimism, and he in turn gave his audience some hope that they could save their schools.

They agreed to hold a mass meeting in the largest church in the county on the next Wednesday evening, just before the beginning of the 1968-69 school year. The Hyde County citizens strategized about how best to organize the county over the next four days, and the meeting concluded with prayer and song.

On her way out of the church, Letha Selby shook Frinks’ hand and promised him that he would not be sorry for coming to Hyde County….

Frinks was not prepared for the scene at Mt. Pilgrim Disciples of Christ Church in Engelhard only three days later. A fishing village built on Far Creek, Engelhard had a 2-block downtown and only 700 residents. When Frinks arrived that evening, the village looked like it could not contain the crowds.

He could scarcely believe the throng of people who had come to hear him, especially in a county with only a few thousand black residents.

Cars were lined up and down both sides of the street from the church to downtown. Frinks could not park anywhere nearby. In order to reach the church, he had to push his way through a large crowd that overflowed out of Mt. Pilgrim.

Inside, several church secretaries frantically wrote down names and telephone numbers. The pews had filled and people stood in the back and along the walls. Ushers opened the church windows so that the people outside could hear.

Late into the night…, this unprecedented crowd organized the school boycott. Throwing aside his earlier apprehensions, Frinks pledged the Southern Christian Leadership Conference’s support for the protest and promised that he would stand by them personally.

Black citizens vowed that starting on September 4, [1968], the first day of the new school year, they would not send their children to class until the school board either included the O. A. Peay School and the Davis School in a new desegregation plan or left them open under segregation.

Rhoda Warren, O. A. Peay and all the black teachers and parents who had struggled against enormous adversity to educate their children in Hyde County’s black schools would doubtless have been proud.

Next time– The Young People’s Revolt