Last spring I visited the Connecticut Historical Society when I passed through Hartford, Conn. I was headed to my niece’s home in New Haven, but I couldn’t resist stopping for a few hours: the Society’s holdings include an extraordinary collection of early American historical manuscripts and I wanted to see if any of them might shed new light on coastal North Carolina.

Founded in 1825, the CHS is one of the oldest historical societies in the U.S. and its museum and library hold more than 4 million manuscripts, books and other historical artifacts.

I was only there for a day, but I found a real treasure that I would love to share here— a remarkable diary that was kept by a Connecticut woman when she stayed in coastal North Carolina in the very first decades after the American Revolution.

The woman’s name was Susan Johnson, and she came from one of Connecticut’s leading families. Her grandfather was Jonathan Edwards (1703-1758), the great Puritan preacher, theologian and philosopher. Her father, Pierpont Edwards, was a delegate to the American Continental Congress.

She was also the sister-in-law of cotton gin inventor Eli Whitney, the daughter-in-law of Connecticut’s first U. S. senator, and a close cousin of Aaron Burr’s.

Evidently fearless, the 29-year-old Susan Johnson left her home and three young children in Stratford, Conn. and headed by herself to coastal North Carolina in November of 1800. In her diary’s first entry in the state, written at Richard Mitchell’s plantation on Warick Creek, in Gates County, and dated November 23rd, she wrote:

At eleven this morning we left Suffolk & proceeded on our way to Edenton. The road lay principally thro’ low ground & the swamp on both sides, in many places seemed almost impregnable. The road for several miles lay on the borders of the great dismal swamp….

Over the next 5 months, Johnson visited Edenton, Washington, New Bern, Fayetteville and Wilmington, as well as a remote camp on the Black River where her husband was building lumber mills and gristmills for a wealthy rice planter named Peter Mallet.

At every step of the way, she described her journey and recorded her impressions of coastal North Carolina in her diary.

In Wilmington– “inhabitants … of all nations”

I found the diary spellbinding. I have seen very few firsthand accounts of the state’s coastal towns and plantations in that era. I’ve seen even fewer written by a woman.

I also can’t remember when I last saw a description of North Carolina in that time period that was written by an individual, of any gender, who was as keen an observer of society as Susan Johnson.

She was an extraordinary person. A daughter of the Enlightenment, she had a strong interest in literature, philosophy and science. She read constantly, had an inquiring mind and she saw into the heart of things.

She was also a resolute, opinionated woman who, at least in her diary, cast a sharp, critical eye on the men who were the young state’s business, political and religious leaders.

She sometimes did so with a dry wit that was all the more withering for its understated quality. 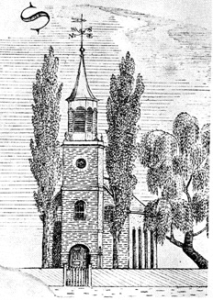 Christ Church, New Bern, N.C. Built ca. 1750, the church was the town’s only house of worship when Susan Johnson visited in 1800 and 1801. Detail from the 19th century Price “Map of North Carolina.”

As one little instance, on Dec. 13, 1800, after listening to a Rev. Beasley’s “ranting sermon of three quarters of an hour long” at a church in New Bern, she wrote simply:

I didn’t feel myself at all improved by it.

Other times she spoke more forthrightly. On February 8, 1801, for example, after spending a month being wined and dined in Wilmington’s most fashionable circles, she confided in her diary:

And now as I am about to take my leave of Wilmington it is proper I should express my sentiments of it & its inhabitants who are of all nations collected there only for the purpose of acquiring property & intend to stay no longer, than to make themselves independent.

She went on to accuse the roughhewn little seaport’s leading figures of having no interest in making civic improvements or in fostering the common good, but only in pursuing their own fortunes.

Hers was a harsh judgment. She was speaking, after all, of merchants and planters whose drawing rooms she had frequented and in whose homes she had attended teas, soirees and a gala ball.

But of course it is also a private sentiment, not one that she very likely shared with her hosts or hostesses.

In that instance, I do find some irony in her words. I imagine she did as well, and perhaps painfully so. In that passage, our Connecticut diarist had to have realized that she could have been talking about her own family, and particularly her husband.

Susan Johnson’s husband, Samuel William Johnson, was also from one of Connecticut’s leading families. He was the son of William Samuel Johnson, who was a framer of the United States Constitution, the state’s first U.S. senator and the president of Columbia College (now Columbia University) from 1787 to 1800.

William Samuel Johnson (1727-1819) was Susan Johnson’s father-in-law and lived with her and her husband at the time of her journey to North Carolina. He was a prominent lawyer, U.S. senator in the First Federal Congress and president of Columbia from 1787-1800. From print by Albert Rosenthal based on a work by Gilbert Stuart. Courtesy of the NYPL Digital Gallery, The New York Public Library

His grandfather, Samuel Johnson, was Columbia’s founder and first president. At that time, it was called King’s College.

Samuel William Johnson and Susan Edwards had married in 1791 and had settled into his family home in Stratford, a coastal town framed by both the Housatonic River and Long Island Sound.

Sometime in the late 1790s, however, Samuel experienced a serious financial misfortune. I haven’t yet discovered what happened, but I would not be surprised if it was related to the Panic of 1796-97.

Felt on both sides of the Atlantic, the Panic of 1796-97 was caused by the bursting of a land speculation bubble and the crash of the U.S. real estate market.

All along the major seaports on the East Coast of the U.S., mercantile firms collapsed and land speculators went bankrupt, a situation exacerbated by the British Parliament’s Bank Restriction Act of 1797.

Many investors ended up in debtor’s prison. Some of those men, such as James Wilson, one of the first associate justices of the U.S. Supreme Court, spent much of the rest of their lives on the run. (Wilson actually fled to North Carolina, and he ultimately died in Edenton.)

At the Black River

Whether Samuel William Johnson traced his financial woes to the Panic of 1796-97 or to a more private calamity, he must have been desperate. Beginning in 1799, he began to go south every winter to build Peter Mallet’s mills and clear forestland.

In partnership with Mallet, he was carving out his own plantation lands as well as making profits for Mallet.

I don’t fully understand their financial arrangement. As best as I can tell, Mallet provided the land and investment capital, while Samuel Johnson provided the know-how and on-site management.

Between 1799 and 1805, Samuel spent 5 or 6 months a year on the Black River. The work was hard, labor was difficult to find, and floodwaters constantly threatened his dams.  He lived in a log cabin with no windows, and he was at least a day’s journey from the nearest town.

Over that time, Susan’s letters to him repeatedly used terms such as “your forlorn situation” to describe his lot.

In those letters (also at the Connecticut Historical Society), she referred to his “gloomy sensations” and fretted that he was spending too much time in his “solitary hut.”

Yet at least at first, Susan Johnson was confident that the Black River was good for him. Above all, she wanted him to stay busy and not worry about his financial prospects back in Connecticut.

The financial crisis back home clearly haunted him, however, leaving him at times despondent and anxiety-ridden.

“I earnestly hope you have not forgotten your promise to me, to leave all your cares behind you,” Susan wrote him on January 4, 1800, during his first winter at the Black River.

It was at the beginning of his second winter in North Carolina that Susan rather precipitously decided to join him there.

Her husband had only left Stratford 9 weeks earlier, but something in his correspondence—perhaps in letters not at the Connecticut Historical Society—alarmed her.

She hastily accepted an invitation from Peter Mallet and his wife to be a guest at their rice plantation on Eagle Island, on the opposite side of the Cape Fear River from Wilmington.

She planned to travel to the Mallets’ plantation, but she was also determined to be at her husband’s side at his “solitary hut” at the Black River.

From Stratford, Susan wrote her husband, “you will certainly never go there again without me.”

She quickly arranged to leave her children in the care of relatives and servants, knowing that she might well be absent from them for nearly half a year.

Leaving her children for so long indicated the depths of her fears, as well as her affection for, and sense of duty to, the man to whom she signed her letters, “my dearest friend.”

Susan Johnson then headed south. She soon reached the edge of the Great Dismal Swamp and the North Carolina state line, which is where I’ll pick up her story in my next post.