Detail from the frontispiece of David Walker’s Appeal, 3rd edition (1830). Walker was born and raised in Wilmington and may have been a member of the Methodist church that Susan Johnson visited in 1801.

This is the 10th part of my series on Susan Edwards Johnson’s diary of her travels on the North Carolina coast in 1800 and 1801. I found the diary last spring at the Connecticut Historical Society in Hartford, Conn.

On January 24, 1801, Susan Johnson’s diary describes a visit to a Methodist church in Wilmington, N.C., that was a strange new experience for her: enslaved Africans and African Americans made up a large majority of the congregation. In addition, she may have been sitting near a young boy who would grow up and become one of the most important voices for freedom and justice in American history.

Her day began less auspiciously. On that same Sunday, she first attended worship services at another church, St. James Episcopal.

Of the Episcopalians, Susan wrote only a single line in her diary—

Perhaps feeling a want of the spirit, or perhaps out of mere curiosity, she decided that afternoon to attend the town’s Methodist church as well.

In her diary, Susan wrote—

In the afternoon went to a Methodist meeting—heard a ranting sermon . . . as is customary from that sect. This congregation is principally of negroes. The Methodist have done much good to the miserable people [– ] have made them more faithful to their Masters  & more moral & decent in every respect—the Society is mostly supported by the Blacks….

To say that the congregation “was mostly supported by the Blacks” was a bit of an understatement. Two years later, in 1803, when Francis Asbury (the first bishop of American Methodism) stopped in Wilmington, he visited the church and later wrote in his diary:

I met the people of color, leaders and stewarts [sic]; we have eight hundred and seventy-eight Africans and a few whites in fellowship.

A Methodist minister named William Meredith had intentionally founded the church as a mission for Wilmington’s enslaved people. That was in 1797, and he was a white man from Great Britain and had previously been a missionary in the British West Indies.

The Rev. Meredith or one of Susan’s hosts apparently told her that the church was steering the enslaved congregants to be “more faithful to their Masters  & more moral & decent in every respect.”

Many local slaveholders would have begged to differ. Methodism was a new, upstart branch of Christianity, and they looked at early Methodism with deep suspicion.

One of the great North Carolina historians, Guion Griffis Johnson, discussed the early Methodists and their relationship to the enslaved in her 1937 masterpiece, Ante-bellum North Carolina: A Social History.

The new religion… met opposition on all sides. It was called “Nigger religion” because Methodist leaders made a special effort to preach to the Negroes and because they opposed slavery. The Methodist preachers often had a peculiar manner of speaking. They made direct appeals to the emotions so that shouting and “trembling” frequently accompanied their meetings. Such extravagances naturally led to persecution. In various parts of the State, particularly at Wilmington, Methodist ministers were arrested or assaulted, churches were burned, and at least one man applied a “blister-plaster” to his wife to cure her of Methodism.

By 1801, when Susan Johnson worshiped there, the Wilmington church had a small building at the corner of Second and Walnut streets. Rev. Meredith had already been imprisoned on one occasion, and whites had burned the church at least once.

Throughout the early 19th century, slaveholders suspected Methodists of being abolitionists. After every slave uprising, they cast blame on Methodist evangelists and their teachings.

In his The Experience of Thomas H. Jones (Boston, 1862), the former slave described how white Methodists in Wilmington assisted him to conceal his wife and children on a ship headed to the North.

In Wilmington, slaveholders also blamed (sometimes with good cause) white Methodists for assisting enslaved Methodists to flee on the Underground Railroad.

During those years, many white Methodist clergymen remained intent on bringing the Gospel to free and enslaved people alike. Echoing what Susan heard, they generally insisted that they were only concerned for the enslaved people’s souls and were not anti-slavery at all.

In reality, that was often the case, but not always.

Among black Methodists, there was no such debate.  In the early Methodist prayer meetings and Sunday schools, they wedded their own struggle for freedom to a Biblical vision of exile, struggle and salvation that was straight out of Exodus.

And then there is this: David Walker, one of the most influential anti-slavery voices in American history, may have been at that Methodist meeting that Susan attended in January 1801.

Walker was born a free black in Wilmington on Sept. 26, 1796, so he would have been 4 years old at that time. (The mother’s status defined the child’s status: Walker’s father was enslaved, but his mother was free so he was born free.)

He would leave Wilmington when he was a young man. Of that moment, he later wrote:

If I remain in this bloody land, I will not live long…I cannot remain where I must hear slaves’ chains continually and where I must encounter the insults of their hypocritical enslavers.

After leaving Wilmington, David Walker eventually settled in Boston, Mass. There he became an important anti-slavery activist and writer, most famous for a pamphlet that he wrote in 1829. 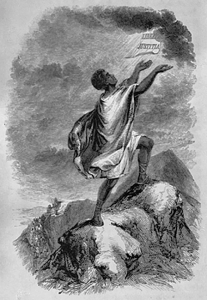 Frontispiece to the 3rd edition of David Walker’s Appeal (1830)

That pamphlet was called Walker’s Appeal, in Four Articles; Together with a Preamble, to the Coloured Citizens of the World, but in Particular, and Very Expressly, to Those of the United States of America, Written in Boston, State of Massachusetts, September 28, 1829.

The title might have been long and ungainly, but Walker’s pamphlet ranks up there with Thomas Paine’s Common Sense in its place in the American literature of freedom and liberty.

Walker’s Appeal was a slaveholder’s worst nightmare, however: a black man staking a claim to America and calling for free blacks and the enslaved peoples of the U.S. to rise up and take their freedom, if whites would not give up slavery peacefully.

America is more our country, than it is the whites — we have enriched it with our blood and tears.

Across the South, white political leaders outlawed Walker’s Appeal. They made it illegal for the Appeal to enter their state and imposed harsh punishments for those who were found with the pamphlet in their possession. One state, Georgia, even announced a bounty for Walker’s assassination.

We can see Walker’s Christian upbringing is his Appeal. In its language, its cadence and its moral framework, the Appeal drew heavily on the Bible, as well as on the political ideas of the Enlightenment.

Not surprisingly, his most important biographer, historian Peter Hinks, has argued that Walker belonged to—or at least had a connection to— the Methodist church that Susan Johnson attended on Jan. 24, 1801.

Hinks is the author of an excellent biography of Walker titled To Awaken My Afflicted Brethren. He also edited an annotated edition of the Appeal that has important background information for understanding Walker and his times.

In both works, Hinks traced Walker’s militant anti-slavery vision to underground intellectual currents that had existed in the African American communities of Wilmington and Charleston, South Carolina, the other city where Walker lived before going north to Boston.

With respect to Wilmington, Hinks specifically identifies the city’s Methodist church as one of the likelier African-American institutions to have influenced young Walker.

I find the possibility irresistible: when she attended that little Methodist church, Susan Johnson may have been sitting a few pews away from David Walker. Of course, she could not possibly have imagined who that young boy would become, just as she did not know the fires of freedom and justice that smoldered there at the corner of Second and Walnut streets.