The Penobscot Marine Museum in Searsport, Maine, has recently made available for the first time more than 20,000 historical photographs from America’s fishing communities, including those here on the North Carolina coast. It is an extraordinary collection: the photographs from every issue of the National Fisherman, the leading trade journal of the commercial fishing industry. 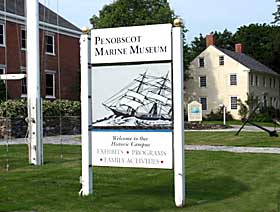 The Penobscot Marine Museum in Searsport, Maine, is home to an extraordinary archive of maritime photographs, including the National Fisherman Collection.

Through a massive digitization and cataloging effort, the photographic archive staff at the Penobscot Marine Museum has made those unique historical images available on-line. You can find them at the museum’s National Fisherman Collection and you can search them by place, name and subject.

Starting today, I’m going to do a pair of posts on a selection of the National Fisherman’s photographs that feature historic images of commercial fishing on the North Carolina coast.

I’m beginning with photographs of the menhaden fishery in Beaufort and Morehead City mainly in the 1930s and ’40s.

In a few days, I’ll share a larger group of images that the National Fishermen’s photographers took at Harkers Island, Buxton, Wanchese and other parts of the North Carolina coast in more recent decades.

PLEASE NOTE: The Penobscot Marine Museum does not own copyright to these images; please contact the museum for information on reusing them. (207) 548-2529. http://www.penobscotmarinemuseum.org.

The first photograph is a portrait of Walter Jones, Jr., of Morehead City, captain of the menhaden boat Wallace M. Quinn, in 1933. The Quinn was owned by Quinn Menhaden Fisheries, one of several menhaden oil and scrap companies that had factories in Carteret County during the Great Depression.

Originally based in Crisfield, Maryland, the company came south as a wholesale dealer in soft shell crabs and bay scallops but got into the menhaden business big-time. The company first opened menhaden factories in Morehead City and Apalachicola, Florida, and later in Louisiana and Texas.

A wry-looking gentleman standing at the stern end of the menhaden boat Margaret on the railway, Beaufort, N.C., 1934.  Built in 1912, the Margaret had been bought by the U.S. Navy and used as a patrol boat during the First World War. After the war, the Douglas Company, one of several menhaden companies based in Reedsville, on Virginia’s Northern Neck, bought her and put her to fishing again. 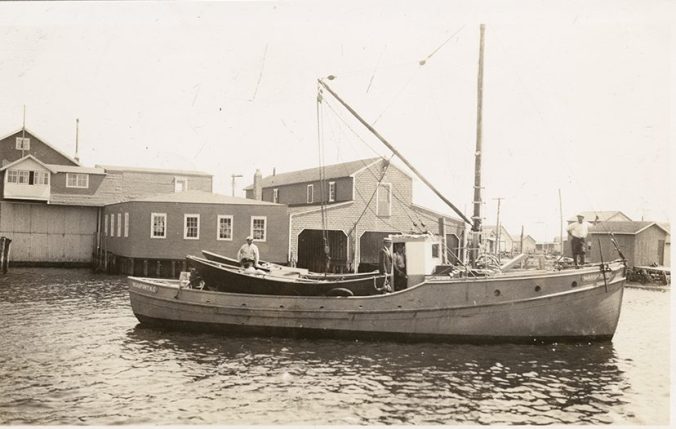 Beaufort, 1934. Another look at the Margaret, this time as she’s headed east on Taylor’s Creek, with a good view of her two purse boats. The gentleman standing next to the pilot house is likely her captain, Einar Nielsen. His name is Scandinavian, of course, and it’s is a good reminder that a considerable number of Swedish immigrants worked in Beaufort’s fisheries in the early 1900s.

Beaufort, 1943. The menhaden boat Bernice Cree creeping toward the Beaufort Fisheries dock on Taylors Creek, so heavy with fish that she can barely float.  She was a tough old boat, maybe a converted sharpie, built locally in 1899 and no doubt worked hard ever since.

After decades of catching fish, some of the old menhaden boats just fell apart at the seams, taking tons of fish and sometimes men’s lives to the bottom with them. The year before this photograph was taken, 17 fishermen had died when the menhaden boat Parkins went down just off Beaufort.

In this case, the Bernice Cree’s captain and crew would see her home. By the time they hit the dock, everybody in town knew, just from looking at the boat’s waterline, that money had been made.

Photo by Bill Sharpe. Courtesy of the Penobscot Marine Museum

Near Beaufort, N.C., 1948. A spectacular view from a menhaden boat’s crow’s nest. The photographer was looking down into a scene of ferocious intensity, as fishermen in two purse boats hold the seine steady and tens of thousands of fish roil the water. A then-new technology in the industry, a hydraulic winch, raises bails of menhaden out of the seine and into the mother boat’s hold.

At that time, two towns on opposite sides of the Newport River, Beaufort and Morehead City, were home to eight of the nine menhaden factories on the North Carolina coast. Fifty-five crews of fishermen—mainly African American men–  worked the boats.

In a single year– 1946– the fishermen in Beaufort, Morehead City and Southport (home to the state’s only other menhaden factory) brought in approximately 150,000,000 pounds of menhaden.

During the menhaden season, all three towns smelled like rotting fish– the aroma of the fish scrap drying in the factory yards. (It became fertilizer, livestock feed and other products.)

That was especially true of the western outskirts of Morehead City (where the community college is now) and pretty much all of Beaufort if the wind was right. It was, people used to say, “the smell of money.” 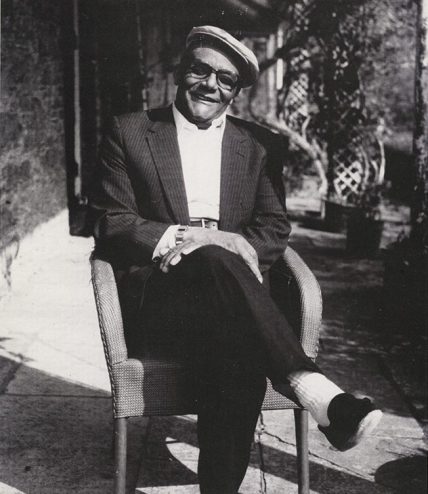 Richard “Big Boy” Henry at his home in Beaufort, N.C., ca. 1990.  I remember him well from my younger days: born in Beaufort in 1921, Mr. Henry was a menhaden fishermen, oysterman, sometimes preacher and blues singer whose best known song, “Mr. President,” was a protest against Pres. Reagan’s budget cuts for services to the poor, elderly and disabled.

In the late 1980s, he played a key role in founding The Menhaden Chanteymen, a group of ex-menhaden fishermen who sang and recorded work songs from their fishing days.

You can hear the Menhaden Chanteymen on several YouTube videos. One of my favorites is a clip from Charles Kuralt’s CBS News on Sunday Morning  in the early 1990s.  The segment features, among others, John Henry Pritchard, one of the few fishermen that survived the sinking of the Parkins in 1942.

Special thanks to the photo archive staff at the Penobscot Marine Museum in Searsport, Maine, and to Steve Goodwin in Beaufort, N.C., for his help in identifying some of the menhaden boats and captains in the National Fisherman Collection’s photographs. I also want to acknowledge the generosity of Diversified Communications, the parent company of National Fisherman, which donated the journal’s entire pre-digital archive to the museum.