The Penobscot Marine Museum in Searsport, Maine, has recently made available more than 20,000 photographs of America’s commercial fishing industry that originally appeared in the pages of National Fisherman.

Last week I highlighted several of the magazine’s photos from Beaufort, N.C., in the 1930s and ’40s. Today I want to share photographs that take us to Hatteras, Buxton, Harkers Island, Wanchese, Belhaven, Rockyhock and several other parts of the North Carolina coast.

I hope you enjoy them. Many of these scenes seem like just yesterday to me, or could even be today, and yet many now seem like relics of another, half-forgotten age. 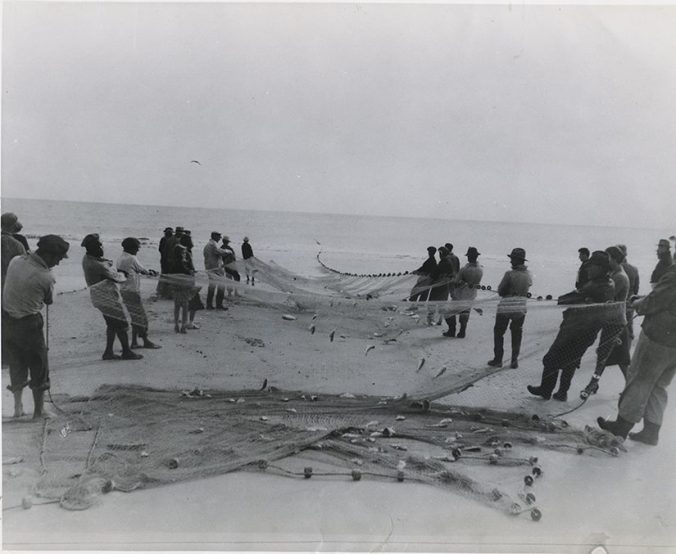 Seining for jumping mullet near Beaufort, N.C., 1940. The site could be any of the local barrier islands– Core Banks, Shackleford Banks or Bogue Banks. At that time, 10 to 12 crews of mullet fishermen like this one still lived and worked on just one of those islands, Bogue Banks, during the big mullet runs in the fall of the year.

At least two of those Bogue Banks crews were made up of villagers from Salter Path, at that time the island’s only settlement of any size. 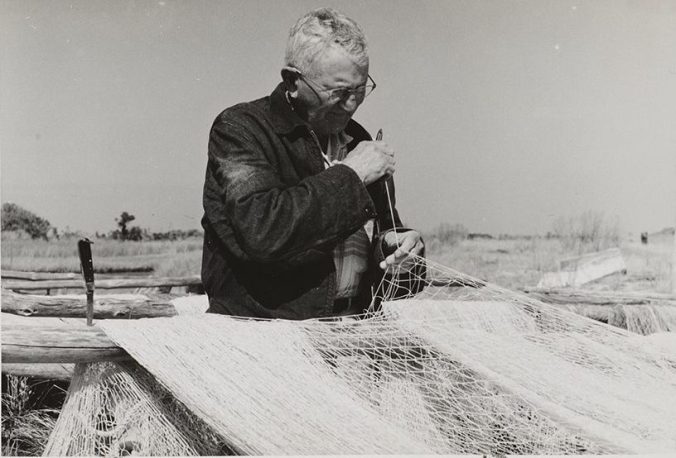 Photo by Lyman B. Owen. Courtesy of Penobscot Marine Museum

A retired commercial fishermen, Lee Peele, mends a mullet net on Hatteras Island in 1963. After fishing on local waters for 60 years, Mr. Peele passed his nets and other fishing gear to three of his sons, Lee, Jr., Maxton and Macie, who had followed him into fishing.

“If he had it to do over again,” Mr. Peele told a reporter, “he wouldn’t choose commercial fishing for a livelihood . . . not enough security in old age.”

A timeless photograph of a family gathering oysters. The caption on the photograph in the National Fisherman does not say where this was, just “North Carolina,” and does not provide a date. The scene reminds me of the Crossing Path on the Newport River, near where I grew up, but it could have been anywhere.

Harkers Island, 1974. A classic Harkers Island skiff under construction at James and Vance Gillikin’s East Bay Boatworks on Ferry Dock Road. On the other side of the road, we can see one of the island’s last scallop houses.

The National Fisherman’s reporter wrote, “Note the curved ribs of heart pine and how the hull form tapers out from a deadrise vee at the bow to near flat at the stern.”

The builders were putting in some hours: you can see light bulbs on the extension cord at the boat’s stern.

That was a different time: the National Fisherman’s reporter observed that he saw wooden skiffs like this one under construction in many of the island’s backyards, as well as in boat yards like East Bay.

Harkers Island, 1974. James Gillikin works auto body putty into the seam along that same skiff’s stem. The National Fisherman wrote: “Note the distinctive flair (sic) in the bow and the juniper stripes which are both nailed and glued to the ribs and to each other.”

Wanchese, on Roanoke Island, 1979. A fisherman unloading a big catch of croaker at the Wanchese Fish Co.’s dock.

A fisherman packing flounder on ice in his boat’s hold, probably in the winter trawl fishery that takes place between Cape Hatteras and Cape Lookout.  Date not listed in the National Fisherman’s records.

Buxton: Building the Lucy B.

Buxton, N.C., 1980. The 34-ft. gill-netter Lucy B. under construction at Michael Scott’s Buxton Woods Boat Works.  One of Scott’s assistants, Richard Ryder, is leveling the floor timbers in the unfinished hull for the boat’s fuel tank.  They were building the boat for commercial fisherman Bernice Ballance.

According to the National Fisherman, Scott drew inspiration for the boat’s design from Hatteras Island’s famous Albatross fleet and other deep deadrise boats built as early as the 1930s. 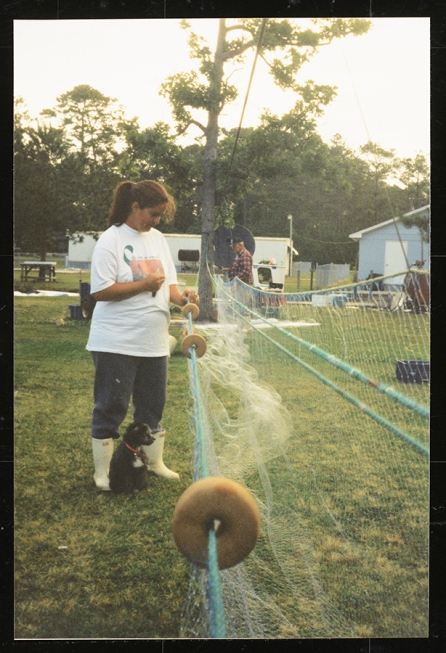 Caroline Adams and C. J. Adams working on their family’s nets at their home in Whortonsville, next to Broad Creek in the eastern end of Pamlico County, in 1997. A very cute puppy is helping.

Pound netting for herring on the Chowan River probably in the 1970s. The boat’s captain, Norman Bunch (2nd from the left), was from Rockyhock, in Chowan County, on the east side of the Chowan River. That region was once home to the largest herring fishery in the U.S.

On this winter day Capt. Bunch has help from his 12-year-old son Mark (with the dip net) and Mark’s cousin Chad White (far left), as well as his regular mate, William Bond, handling the net on the far right.

This, too, was another age. Nobody has been herring fishing on the Chowan River, at least not legally, since the collapse of river herring stocks and the statewide harvest moratorium on inland herring that was enacted in 2006.

The trawler Nell in trouble on Pamlico Sound, 1982. In a big northwest blow, she had started to take in water off Middle Ground Shoals a little after noon on Nov. 4. The Nell’s captain, Charles Equils of Belhaven, put in a distress call an hour and a half later.

The Elizabeth City Air Station sent out a helicopter and lowered a pump onto the Nell’s deck. In the photo you can see Capt. Equils and his crew wrestling the pump aboard. U.S. Coast Guard utility boats stayed with the Nell, rendering assistance to keep her afloat, and she was eventually towed into Belhaven.

The Coast Guard’s 5th District headquarters responded to the Nell and at least 30 other distress calls during that storm. 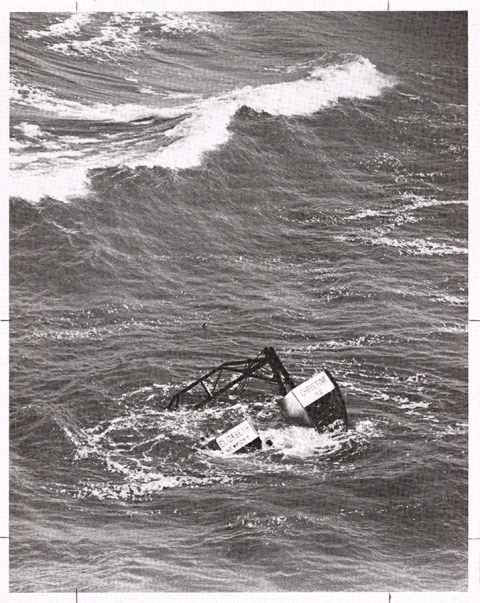 Oregon Inlet, 1985. The trawler Elizabeth Christine going down in rough seas. She was out of Newport, Rhode Island.

Fishermen’s protest, 1998, place unknown. The gentleman with the “Let Me Work” sign is Hubert Potter from Goose Creek Island.

Important note: the Penobscot Marine Museum does not own copyright to these images; please contact the museum for information on reusing them at (207) 548-2529 or www.penobscotmarinemuseum.org.

In addition, I’d also like to thank Karen Amspacher and Pam Morris at the Core Sound Waterfowl Museum and Heritage Center on Harkers Island, N.C., Mark Bunch of Rockyhock, N.C. (the 12-year-old pound net fisherman, now all grown up) and my brother Richard Cecelski, the founder and director of Carolina Ocean Studies, for their help in identifying some of the people, places and boats in the photographs.