This is the 7th part of my 9-part look at artifacts from the National Museum of African American History & Culture that speak to North Carolina’s coastal history. 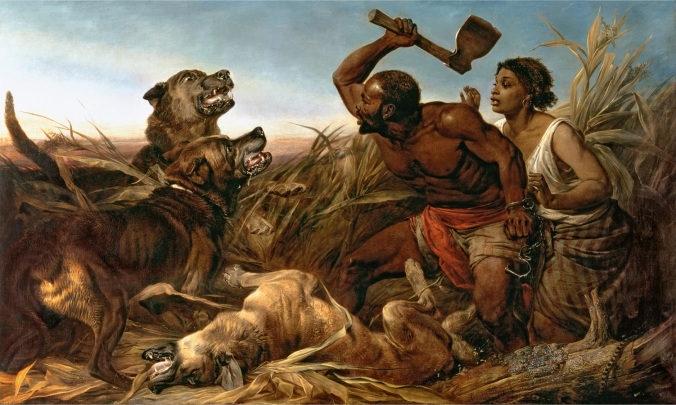 A painting called “The Hunted Slaves” is another of the treasures at the National Museum of African American History & Culture in Washington, DC, that speaks to North Carolina’s coastal history.

Done in Liverpool, England, in 1862, Richard Ansdell’s oil painting depicts a pair of fugitive slaves in the Great Dismal Swamp, the vast wetlands that stretch across northeast N.C. and southeast Va.

In the painting, the fugitive slaves are defending themselves against a slave catcher’s dogs.

The man stands in front of a woman, having killed or wounded one of the dogs with a hatchet. He is still trying to fight off two other dogs.

A pair of manacles dangles from the man’s left wrist, and we can see scars and a brand, or possibly a tattoo, on his body.

Dressed in a loose white top and a brown striped skirt, the woman crouches behind him, almost leaning into him, as if she’s trying to add her strength to his in the battle with the dogs.

In the distance we can see a broad swath of marshland and gray water.

In many ways “The Hunted Slaves” is a highly stylized and romanticized anti-slavery image: it could have been an illustration for Longfellow’s 1842 poem “The Slave in the Dismal Swamp” or a frontispiece for Harriet Beecher Stowe’s 1856 novel, Dred: A Tale of the Great Dismal Swamp.

The War and the Cotton Famine

The American Civil War inspired Ansdell to paint the scene. Through his art, he sought to influence the British public against economic or political alliances with the Confederacy.

When Ansdell painted “The Hunted Slaves,” all of England was suffering from the “Cotton Famine,” the shortage of cotton in British mills due to the Union navy’s blockade of Confederate ports.

The Cotton Famine hit the cities in England’s industrial northwest the hardest, but it was felt throughout the country.

Prior to the Civil War, according to historian Gene Dattel’s Cotton and Race in the Making of America, Great Britain relied on slave-produced American cotton for more than 80% of its essential industrial raw material.

Forty percent of the country’s exports came from textile mills. A fifth of British workers were involved one way or another in the production of cotton textiles.

The Union navy’s blockade of Confederate ports had led to the widespread closure of English textile mills, the loss of many jobs and long lines of desperate people waiting for food, coal and other relief.

Ansdell, in fact, donated his profits from the painting’s sale to a Liverpool fund to help workers suffering because of the Cotton Famine.

In his own way, I think Ansdell wanted to show his support for the plight of those textile workers. Yet he also sought to remind the British public that there was a moral imperative not to side with the Confederacy, a country with a deep, unshakeable commitment to slavery and one still holding millions of people in bondage.

The United Kingdom’s parliament, by the way, had abolished slavery in the British Empire when it passed the Slavery Abolition Act of 1833.

Into the Great Dismal

For all its political intent and romanticism, “The Hunted Slaves” is still a fundamentally sound portrait of the most central aspects of slavery in and around the Great Dismal Swamp.

Many enslaved people did try to escape into the Great Dismal. A few of them survived in hiding, though rarely for long, and the large majority were re-captured and re-enslaved or killed.

A small but important number used the swamp as a route to freedom, a subject that I examined in my book The Waterman’s Song.

A much larger chapter in the history of the Great Dismal Swamp, though, is white society’s relentless, brutal and unforgiving pursuit of those fugitive slaves.

That is a chapter of the swamp’s history that features well-armed posses and crowds of pursuers driving fugitives into ambushes, much as they did deer, bear and other wild game.

That is a chapter of the swamp’s history with bounty hunters and skilled trackers born and raised in the swamp and knowledgeable of its darkest corners.

That is a chapter of the swamp’s history populated by bloodhounds like the ones in Ansdell’s painting.

If fugitive slaves still eluded them, white planters and merchants were known to resort to torching the forest.

As early as 1810, manmade fires had destroyed most of the swamp’s old growth forest.  Slaveholders had set some of those wildfires so that they could drive fugitive slaves into the open.

And yet:  despite the bounty hunters, the bloodhounds and the fervor with which slaveholders pursued their “property” into the swamp, many enslaved African Americans still risked everything and dared to flee into the Great Dismal in search of freedom.

Some few did make it to freedom. You’ll read such accounts in my book The Waterman’s Song and in other historical works on the Great Dismal.

If you’re a regular reader of this blog, you might also remember the piece I wrote last fall called “Escape through the Dismal Swamp.” In that post, I focused on the story of an enslaved young man named John Nichols who fled to freedom through the swamp in 1862.

We can’t forget of course that the artist that painted “The Slave Hunt” lived on the other side of the Atlantic and had never seen the Great Dismal Swamp.

The scene he painted is romanticized, and he certainly had British politics in mind when he chose the theme for the work.

And yet for all that, the painting helps us today to remember those that made it to freedom and also all those that did not.