Today– the second part of my series “`The Shrimp Capital of the World’– Charles Farrell’s Photographs of Southport, N.C., 1938!”

Today I want to begin my look at Charles Farrell’s photographs of Southport’s shrimp industry with a special pair of photographs.  I love both of them— they’re so full of youth and joy, beauty and innocence.

The second photograph (below) shows young Reaves and three of his friends sitting on that same boat’s gunwale. 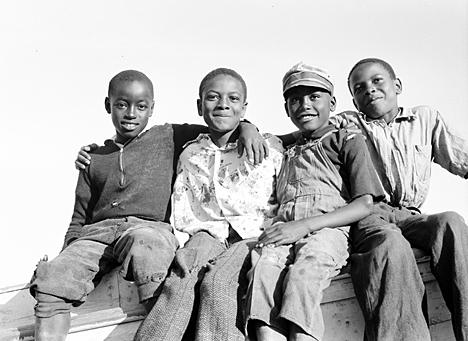 In the fall of the year, when the shrimp were running, those boys and their friends owned the Southport waterfront.

While their mother, aunts and older sisters headed and packed fresh shrimp, the boys played along the shore and ran in and out of the shrimp houses in a way that is wholly unimaginable today.

A few years ago, I visited with a retired shrimper and menhaden fisherman named Charles “Pete” Joyner at his home in Southport and we talked about these photographs.

At the time, Mr. Joyner was 91 years old (he has since passed), but when he was a boy he knew all four of those young men and spent many a day with them on that waterfront.

Like those boys, Mr. Joyner grew up around the town’s shrimp houses.

Much of his family worked in the town’s shrimp houses and canneries. He told me that he first headed shrimp with one of his aunts when he was 7 or 8 years old—so that was in or about 1930.

On that first day in a shrimp house, he headed shrimp all day and only filled one bucket—he made 5 cents.

A few years later, when Mr. Joyner was 12, he got his first steady job as a cook on a shrimp trawler working out of Fernandina Beach, Florida.

After the season ended in Southport, many locals followed the shrimp south to South Carolina, Georgia and Florida.

Mr. Joyner told me that he and his friends weren’t just playing on the waterfront when they were little boys, either.

The shrimp boats usually came into the docks at two or three o’clock in the afternoon. When they hit the dock, the boys immediately jumped on board and set to culling the fish and shrimp.

They’d put the shrimp in wire baskets and grown men shoveled them onto carts that ran on rails into the shrimp house, which was just a plank or corrugated tin building built on pilings over the river.

Inside, the shrimp headers and packers waited.  Some of the shrimp houses only employed women; some employed men and boys, too.

After they culled the fish and shrimp, Pokey Reaves and his buddies got to take the fish back to their homes in Southport and down in Jabbertown, on Southport’s outskirts. Mr. Joyner recalled that his family had a special fondness for the trout, flounder and whiting.

The boys often took at least a turn at the heading tables, too.  In a few hours, once they got the hang of it, they could head 3 or 4 buckets of shrimp and make a few nickels.

When they got tired or bored, they took their nickels next door and bought candy at Dan Harrelson’s store.

It was the 1930s– the Great Depression. Times were hard. Earlier in the ’30s, during  the Depression’s worst years, shrimp sold for next to nothing. Some fishermen had to let shrimp and fish rot on the beach because the New York markets couldn’t afford to buy them anymore.

Yet the children ran the beach, found joy in one another’s company and savored that candy at Dan Harrelson’s store.

Of course they also knew that, inside the shrimp houses and canneries, there were women and men, older sisters and aunts, who loved them and would do their very best to look after them, there on the shores of the Cape Fear River.

4 thoughts on “Jabbertown’s Children– “The Shrimp Capital of the World,” part 2”